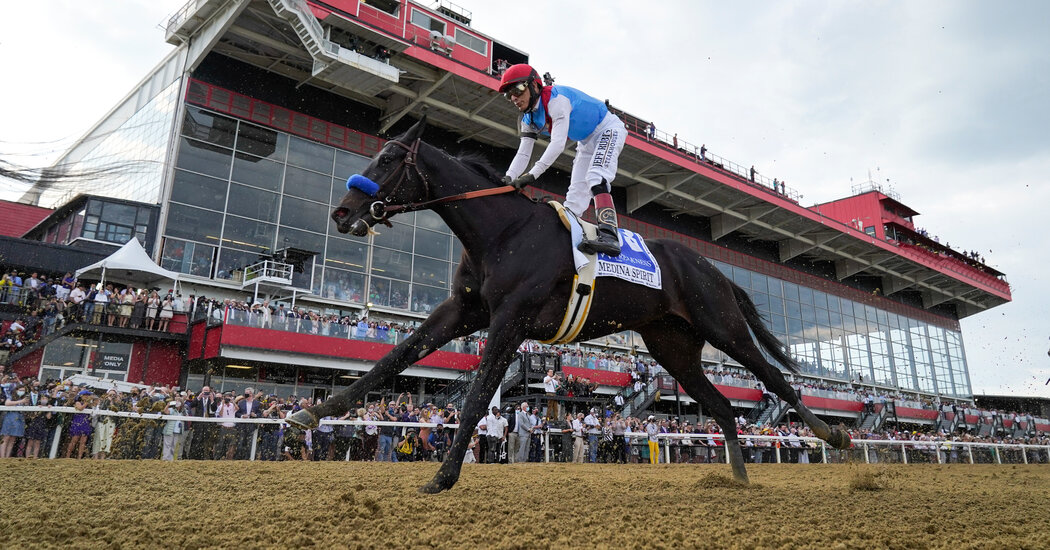 The Kentucky Derby winner Medina Spirit’s post-race positive drug test was confirmed, setting the stage for the colt trained by Bob Baffert to be the second horse in the 147-year history of America’s greatest race to be disqualified for a failed drug test.

Clark Brewster, a lawyer who represents Medina Spirit owner Amr Zedan, said the laboratory at the University of California, Davis confirmed that a second post-race sample found the drug betamethasone, a corticosteroid injected into joints to reduce pain and swelling, at a prohibited level.

In a text message, however, Brewster said the laboratory did not test the blood or urine samples for the presence of other compounds, “which could prove the trace positive came from an inadvertent and materially inconsequential contamination sourced from a topical ointment used to treat Medina Spirit for a skin lesion on his hip.”

Immediately after announcing Medina Spirit’s positive test on May 9, Baffert gave a series of television and radio interviews, floating various theories about how the colt had tested positive for betamethasone — blaming “cancel culture” for the controversy and saying racing officials were out to get him.

He soon reversed himself, however, and acknowledged treating Medina Spirit for a rash by using an antifungal ointment called Otomax, which — to Baffert’s professed surprise — contained betamethasone.

Brewster said the Kentucky Horse Racing Commission has agreed to send the original blood and urine tests to an independent and accredited laboratory for analysis to determine whether the specimens contain other components proving the source to be the topical ointment.

If Medina Spirit is disqualified from the Derby, Zedan will forfeit the more than $1.8 million first place check he earned for crossing the finish line first. In 1968, Dancer’s Image’s Derby victory was taken away after a drug test showed the presence of a banned anti-inflammatory.

“If it was inadvertent contamination, that should be taken into account,” said Brewster in a telephone interview. “We’re hopeful that reasonable minds and good-intentioned regulators can see what it is, and what it is not, and not have a draconian response.”

Brewster. who breeds and owns horses, said that the commission has foregone disqualifications in previous cases when it found mitigating circumstances.

Neither Baffert nor his lawyer, W. Craig Robertson III, returned emails or phone calls for comment.

In an email, a spokeswoman for the Kentucky Horse Racing Commission declined to comment on the results of the second sample.

“The KHRC is not going to be providing comment or updates on the status of this ongoing investigation. We will provide information when the entire matter is complete,” said Sherelle Roberts.

Baffert already has earned the ire of Churchill Downs officials who have made it clear that if a second sample confirmed the presence of the drug, Medina Spirit would be disqualified and Mandaloun, the runner-up, would be declared the Derby winner.

The Medina Spirit controversy comes as horse racing, acknowledging it has a drug problem, prepares to implement the Horseracing Integrity and Safety Act, which was passed last year in Congress. It will take effect July 1, 2022, and calls for a board overseen by the Federal Trade Commission to write rules and penalties to be enforced by the United States Anti-Doping Agency.

The agency, which regulates Olympic and other elite athletes in the United States, revealed the cyclist Lance Armstrong’s cheating and issued him a lifetime suspension in 2012.

In the span of four weeks during racing’s Triple Crown season, Baffert has gone from being the garrulous and voluble face of horse racing to a mostly silent poster boy for what is wrong with the sport.

For 25 years, New York City has been Baffert’s kind of town and Belmont Park has been the racetrack that made him if the most famous thoroughbred trainer in America. Five times, he has brought the Kentucky Derby and Preakness winner for the “Test of the Champion,” as the Belmont Stakes is known, with a Triple Crown hanging in the balance.

With American Pharoah in 2015 and Justify in 2017, Baffert completed the sweep of the sport’s holy grail and left the city a conquering hero, bringing renewed attention to an often-forgotten sport. Over the years, he has thrown out the first pitch at a New York Mets game, dined in Manhattan’s finest restaurants and good-naturedly accepted the heckles and hurrahs from the Big Apple’s impassioned horseplayers.

For the 153rd running of the Belmont Stakes on Saturday, however, Baffert will be in California after the New York Racing Association barred him from running his horses at state tracks because of Medina Spirit’s failed test. He has been shut out of one of the biggest days of horse racing.

While track operators in New York and at Churchill Downs have refused to allow Baffert to enter his horses, his powerful stable continues to dominate races in California. He is the leading trainer at Santa Anita Park’s current meet with more than $3.6 million in earnings. The track is own by the Stronach Group, which also owns Pimlico Race Course in Baltimore and allowed Medina Spirit to race in the Preakness after passing expanded drug testing.

The California Horse Racing Board said in a statement that like their counterparts in New York and Kentucky, their hands were tied until Medina Spirit’s second sample is confirmed and a complaint filed against Baffert.

“They face the same issue the CHRB does in that regulators cannot suspend or revoke occupational licenses without a hearing and due process,” the statement said. “Should any regulatory body take action against any licensee, we would reciprocate that action in California.”

Baffert has gained the enmity of rivals who believe he has persistently cheated, suspicions fueled by 30 drug tests his horses have failed over four decades, including five in the last year or so.

The cases took months, if not years, to adjudicate and were met mostly with modest fines or brief suspensions as Baffert asserted he did nothing wrong and blamed environmental contamination or human error for the results. Still, deep-pocketed owners flock to Baffert’s stable.

In 2019, The New York Times reported that Justify, also trained by Baffert, had failed a drug test after winning the 2018 Santa Anita Derby in Southern California. The rule at the time required that Justify be disqualified, forfeiting his prize money and preventing his entry into the Kentucky Derby a month later.

The California Horse Racing Board’s chairman at the time, Chuck Winner, had employed Baffert to train his horses. Justify’s failed test was investigated for four months, allowing the horse to keep competing long enough to win not only the Derby, but also the Preakness and the Belmont Stakes to become the 13th Triple Crown winner. His post-race tests were clean in all three.

In August 2018, after Justify’s breeding rights had been sold for $60 million, the racing board’s medical director suggested the illegal substance might have been present in some jimsonweed the horse ate. The board disposed of the inquiry altogether during a rare closed-door session.

If Medina Spirit is disqualified, Baffert and the colt will join Maximum Security and Dancer’s Image as the only horses to have their Derby victories overturned.

In 2019, Maximum Security was first across the finish line, only to be disqualified for almost knocking over a rival horse in the far turn and slowing the momentum of others. The next year, Maximum Security’s trainer, Jason Servis, was among the 27 people charged by federal prosecutors in a wide-ranging scheme to secretly dope horses and cheat the betting public.