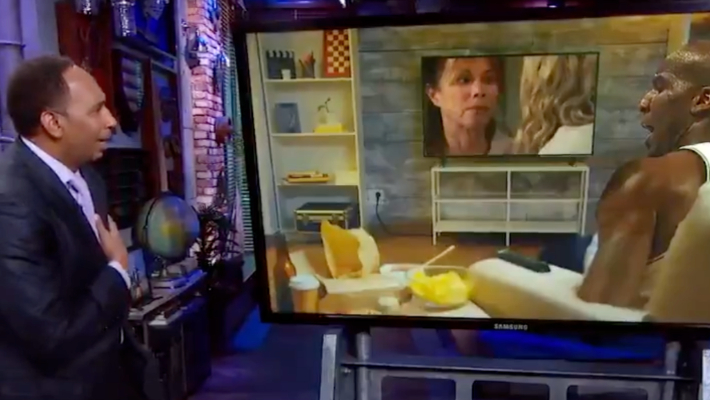 Stephen A. Smith has parlayed his general Stephen A. Smith-ness into an occasional cameo on General Hospital. He’s been a well-documented fan of the soap opera for some time, and it eventually paid off in a role as Brick. He’ll appear on every now and then, and every single time, it is very funny that Stephen A. is on a soap opera.

The latest appearance was the best one yet, as Smith got into an extremely soap opera-y shootout that really is sensational. It is corny in all the right ways, but apparently, one of his ESPN colleagues is not a fan, as Kendrick Perkins appeared on Stephen A’s World and said the whole thing was “horrible.” The suburbs come up, as does a clip of Smith bricking a jumper in a full suit, and then Stephen A. gives an extremely Stephen A. response to the whole thing. It’s pretty good! We’ll discuss momentarily:

The main takeaway from all of this is that after Smith threatened to pull clips of Kendrick Perkins shooting a basketball, the two really do need to settle things by seeing who has a better jumper right now. Or Perk can just appear on General Hospital and try to out-act Smith. Either way, this seems like a story that won’t be ending any time soon.