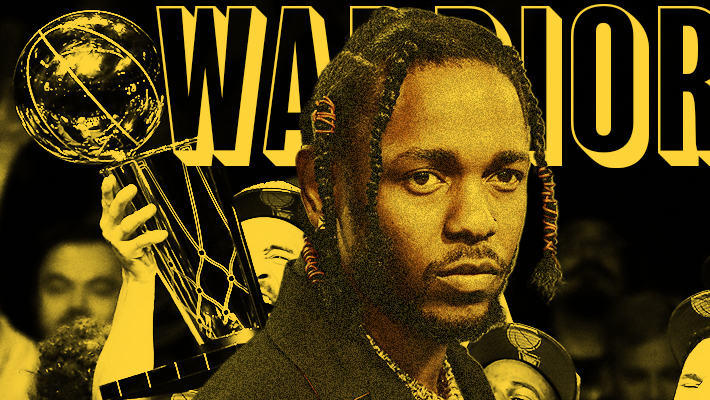 The Golden State Warriors just handled business in the Western Conference Finals and sent the Dallas Mavericks packing with a 4-1 series win. Now the Warriors are heading back to the NBA Finals for the first time since 2019 and will be a likely favorite against either the Boston Celtics or The Miami Heat — especially if the hip-hop gods work their magic with the Dubs again, because, are you ready for this? In the “Woah… that’s crazy!” department, every Kendrick Lamar album drop since 2015 has also been accompanied by a Golden State Warriors NBA Championship.

That’s right: When Kendrick dropped To Pimp A Butterfly in 2015, the Warriors beat the Cleveland Cavaliers for the team’s first title since 1975. Then when DAMN. dropped in 2017, Stephen Curry, Klay Thompson, Draymond Green, and company beat the Cavs again in the Finals. Finally, when Kendrick was at the helm of the excellent Black Panther Soundtrack in 2018, the Warriors cemented their dynasty with a third title, against the Cavs again, leaving LeBron James in the dust. Maybe if Kendrick hadn’t started taking a very long break from putting out albums, the Warriors wouldn’t have dropped the 2019 Finals to the Toronto Raptors?

(The exception to this rule is Untitled Unmastered, which was released in 2016, when the Warriors lost to the Cavs in seven games. However, Untitled Unmastered isn’t usually considered a proper studio album, since it’s made up of demos from the To Pimp A Butterfly era. So, objection overruled.)

So does this year’s release of Mr. Morale & The Big Steppers signify that another Warriors title is on the horizon? We’ll find out just how powerful this Kendrick/Warriors synergy is within the next two weeks. And somehow, even with the Raptors not making it anywhere close to the Finals this season, Drake still finds himself as a big winner here no matter what.