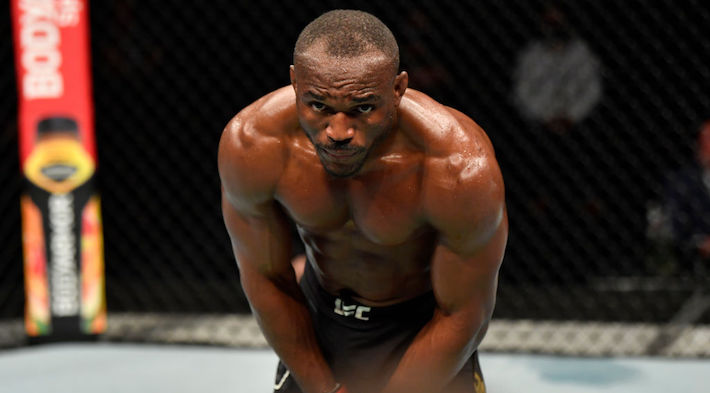 Kamaru Usman (18-1) TKO’d Gilbert Burns (19-4) in the main event of UFC 258 to retain the welterweight title Saturday night from the UFC APEX in Las Vegas.

Burns came out firing, dropping Usman with a big right hand and stinging him again with an overhand right. Burns ended up on his back, challenging Usman to meet him on the ground. Instead, the champ regained his composure and waited for Burns to get back on his feet. The challenger struck with precision early and often, chipping away with little jabs and trading strikes with the champ.

Usman continued to jab away to open the second, finding his range and putting together a handful of combinations. Midway through the second, Usman hurt Burns with a huge right hand, sending him stumbling against the cage. Usman stunned Burns again with a jab-right hand combo, but the challenger kept coming forward. With around a minute remaining in the round, Usman dropped Burns with the jab and allowed the challenger to get back on his feet to close the second.

Usman opened the third, switching southpaw and dropping Burns with a big jab before getting the stoppage for a huge TKO victory.

Usman has steamrolled the welterweight division since earning the title in 2019 in a dominant win over Tyron Woodley. After knocking out Colby Covington and taking a decision victory from Jorge Masvidal in 2020, Usman opened 2021 with his toughest challenge to date against Burns. Following the fight, Usman signaled that he would like a second bout with Masvidal.

Burns came into his title tilt on a three-fight win streak, dominating the former champ, Woodley to a five-round decision victory in May 2020. He was scheduled to fight Usman in July before testing positive for COVID-19, but after more than six months away from the Octagon made his much-anticipated return.