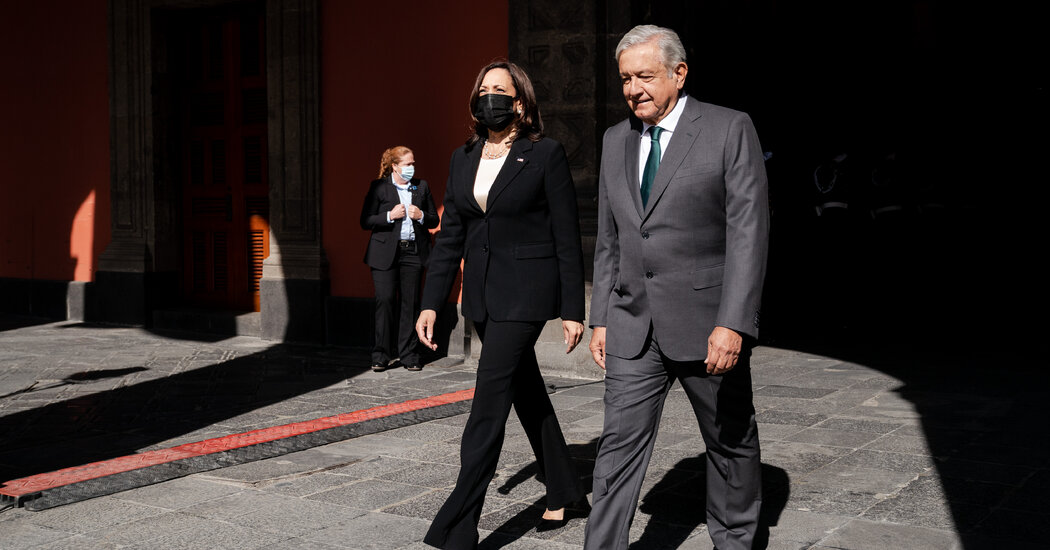 MEXICO CITY — Before flying to Guatemala and Mexico on her first foreign trip, Vice President Kamala Harris faced questions over how she would approach her role as the face of President Biden’s plan to bolster the region and deter migration to the United States.

After weeks of criticism from Republicans and some moderate Democrats who argued that the administration lacked a clear strategy on migration, Ms. Harris came to Central America with a blunt response: The administration’s focus would be asserting control over its borders, even if that meant turning away, for now, those fleeing persecution and poverty whom the vice president has promised to help in the long run.

Ms. Harris was similarly candid about the need to address the root causes prompting migrants to make the long, dangerous trek north from Central America, despite the hundreds of millions spent by the United States to improve prospects in the region. In Guatemala, she announced that the United States will assist an anti-corruption panel that has been denounced by President Alejandro Giammattei — even as the Guatemalan leader stood watching.

But it was her comments on migration — telling migrants in Guatemala, “do not come” — that prompted a new round of criticism. Immigration advocates accused the vice president of undermining immigration law and Mr. Biden’s pledge to restore an asylum-processing system at the southwest border.

A day later, in Mexico City, Ms. Harris said there was “no question” her work in Central America would have a positive effect on the region.

“The issue of root causes is not going to be solved in two days,” Ms. Harris said. “It is not a new issue for the United States to feel the root causes on our shores.”

As crossings of unaccompanied minors and teenagers have soared this year, the Biden administration has relied on an emergency rule instituted by President Donald J. Trump that empowers border agents to rapidly turn away migrants without providing them a chance to apply for asylum. Put in place after the coronavirus outbreak, the order justifies the expulsions as a health measure intended to stop the virus from spreading.

Under U.S. immigration law, migrants are entitled to ask for protection once they step on American soil.

The continued use of the rule, Title 42, has prompted criticism from immigration lawyers, former officials with the Centers for Disease Control and Prevention and the administration’s own medical consultants.

As a senator, Ms. Harris had once questioned the legality of the border policy. She signed a letter with fellow Democrats that accused the Trump administration of “misinterpreting its limited authorities” by using the rule to turn away asylum seekers.

“Why is this administration telling asylum seekers to stay home when we have a moral and legal duty to give those in danger an opportunity to seek refuge,” asked Lee Gelernt, a lawyer for the American Civil Liberties Union, which is suing the administration over its practice of turning migrants away. “Hopefully domestic politics is not a driving force because asylum must operate outside of politics.”

While the United States has used Title 42 to turn away most migrants, the Biden administration has struggled at times to quickly return migrant families to Mexican authorities because of a change in Mexican law and limited shelter capacity south of the border. The United States has been in talks with Mexico to find a remedy, though Ms. Harris said she did not discuss the matter with Mr. López Obrador on Tuesday.

The challenge facing Ms. Harris is no doubt complex.

Ms. Harris’s team has tried to distance her from the U.S.-Mexico border issue, an acknowledgment of the political baggage it brings to any Democrat with aspirations for higher office. While she has shown a willingness to speak about the causes of migration, Ms. Harris has stumbled when discussing the border.

When pressed by Lester Holt of NBC on Monday about why she wasn’t visiting the border itself, Ms. Harris responded, “And I haven’t been to Europe. And I mean, I don’t understand the point that you’re making. I’m not discounting the importance of the border.”

On Tuesday, Ms. Harris committed to visiting the border and rejected accusations that her absence reflected a lack of focus.

“I think it’s shortsighted for any of us who are in the business of problem-solving to suggest we’re only going to respond to the reaction as opposed to addressing the cause,” Ms. Harris said.

Past attempts to bolster Central America, including efforts championed by then-Vice President Biden, have failed to prevent migrants from fleeing to the United States, where they can face crowded facilities and a yearslong wait for resolution of their cases.

The administration has made progress in moving migrant children and families out of border detention and into temporary shelters managed by the Department of Health and Human Services. Still, border agents are projecting that at least 170,000 migrants crossed the border illegally in May, which would be the highest number of crossings for that month in at least two decades.

Ms. Harris said the Biden administration will continue to focus on the long-term factors that push families to travel to the United States.

On Tuesday, in a meeting with Mr. López Obrador, Ms. Harris’s team announced that the Biden administration would issue loans for affordable housing, infrastructure development and efforts to grow cacao and coffee.

The United States will also invest $130 million over three years to support labor protections for Mexican workers and provide forensic training to Mexican officials to help find tens of thousands of missing people.

The two leaders signed an agreement in the national palace that reiterates a commitment to deter migration by addressing the factors that drive it — poverty, persecution and corruption in Central America.

“We are very pleased to have her here and we will touch on that subject but always addressing the fundamental root causes,” Mr. López Obrador said when asked by a reporter if he would work with the United States on border security.

The Biden administration has also asked Mexico to increase the number of security personnel at the Mexico-Guatemala border — and promised to send hundreds of thousands of vaccines to Mexico and Central America.

A day before, in Guatemala, Ms. Harris pledged to use U.S. aid to create jobs, establish initiatives for women developing businesses and address security concerns. She also touted a resource center where migrants can learn about refugee and asylum programs that do not require a journey to the border.

But strategies centering on long-term investment have been used by the U.S. government in the past, only to have the funds not reach those in need. The administration is hoping that migrants, this time, will trust the repeated promises of government officials and break the practice of traveling to the United States to provide for their relatives.

“I don’t think it will stop soon because there’s no work here. If there were work here, then it would stop,” said Pascual Santay López, the president of the local council of Chex Abajo, an Indigenous mountainside village in Guatemala. “We don’t go to be lazy or do bad things. We just go to work.”

Mr. López said his fellow community members will likely continue to make the trek north, despite the statements of the United States. For now, they will likely be turned away.

Still, Ms. Harris offered assurances that her work during the trip will bring change.