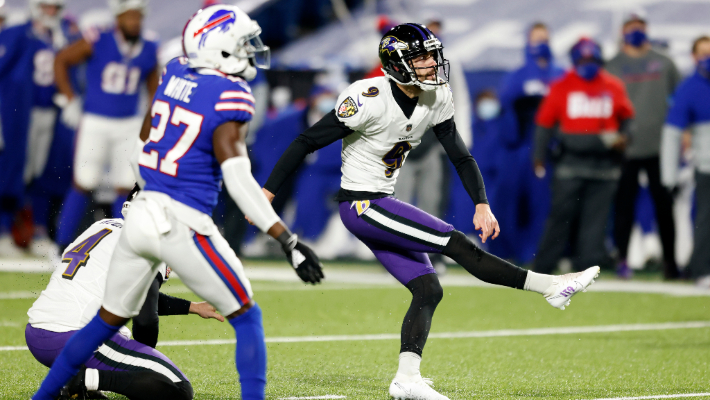 Justin Tucker very well might be the best kicker in NFL history. Whenever the Baltimore Ravens have needed three points at basically any point in his NFL career, Tucker has lined up and generally gotten the job done. For his career, Tucker has connected on 90.7 percent of his field goal attempts, and this year, he only missed three times in 29 tries.

We say all of that to say this: It is weird when Tucker misses a field goal, and even weirder when he misses more than one, and even weirder when Tucker hits one off the uprights. So naturally, in the first half of the Ravens’ conference semifinal game against the Buffalo Bills in Orchard Park, Tucker managed to do something he’s never done before, and not necessarily in a good way.

Baltimore started the game with the ball and put forth a lovely 12-play, 52-yard drive that took nearly seven and a half minutes off the clock. They called on Tucker to put points on the board from 41-yards out, but the 15 mile per hour Buffalo wind threw him off ever so slightly and he doink’d one off the left upright.

In the immortal words of Howie Day, even the best fall down sometimes, and the good news for Tucker is that he got a chance at redemption in the second quarter, lining up from 46 yards out for a boot. But to continue the Howie Day joke from the last sentence, Tucker made the ball collide with the right upright this time.

To be fair to Tucker, Bills kicker Tyler Bass also missed one wide right, and since hitting an upright is more impressive than missing wide, I suppose there is something oddly admirable about this. Still, Tucker’s as reliable as they come, to the point that this is the first time in his career that he’s ever failed to make two kicks inside of 50 yards in the same game.

From @ESPNStatsInfo: Justin Tucker last missed 2 field goals in a game in 2018 — Week 16 against the Chargers — but both were from 50+.

This is the first time Tucker has missed multiple FG inside of 50 yards in the same game.

Despite all of this, it is probably safe to assume that if the Ravens need a field goal to win later in the game, Bills fans are going to be pretty scared of No. 9 getting the chance to put his foot through the ball.