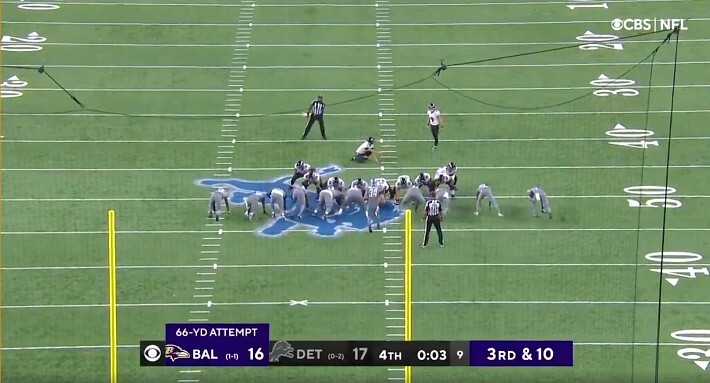 Justin Tucker is quite possibly the greatest kicker to ever play in the NFL, and on Sunday he cemented his status as a legend by taking down an all-time record.

The Baltimore Ravens trailed 17-16 in Detroit after the Lions marched to a go-ahead field goal with just over a minute to play, as they sought out their first win of the season. The first three downs of Baltimore’s ensuing drive couldn’t have gone worse, as they lost nine yards with Lamar Jackson finding himself under immense pressure, setting up a 4th-and-19 that (after a questionable Lions timeout) they converted to just across midfield.

After not being able to pick up anymore yards, they trotted Tucker out in search of a miracle from 66 yards. Considering earlier in the day we’d seen a 68-yarder from Matt Prater come up short in Jacksonville and get returned for a touchdown, this seemed like pretty low odds. But Tucker is the rare potential Hall of Famer as a kicker for a reason, and he absolutely boomed this kick down the middle and just far enough to get the friendly bounce off the crossbar.

The reverse angle shows the ball travel just to the back half of the crossbar, bound straight up into the air, and through for the improbable, record-setting three points (and a Ravens win).

It was a wild scene in Detroit, as the Lions and their fans were left in stunned silence while the Ravens ran around the field in pandemonium, not quite sure how that just happened. Employing the best kicker in the league has its benefits, for sure.