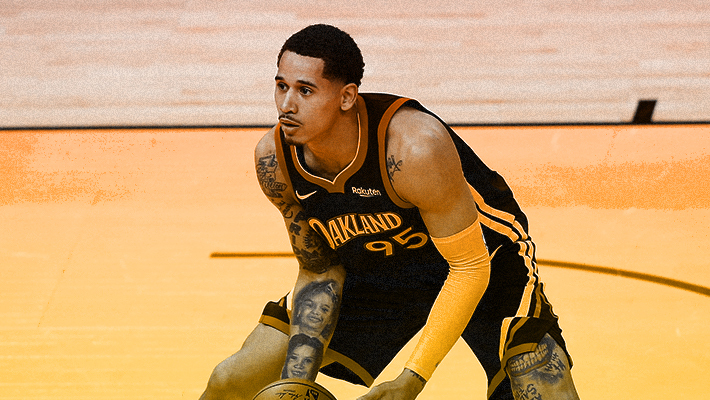 It’s been quite the year for Golden State Warriors forward Juan Toscano-Anderson. On the court, Toscano-Anderson’s years-long journey through professional leagues in Mexico, Venezuela, and the G League culminated in him becoming a fan favorite with his hometown team. Toscano-Anderson had a cup of coffee with the Dubs last season prior to the league’s shutdown due to the COVID-19 pandemic, which he parlayed into a two-way contract this year.

Eventually, Toscano-Anderson’s hard-nosed style of play and popularity within the organization led to him receiving a two-year deal with the Warriors. As Draymond Green told us earlier this year, “I love Juan, man. A guy who got out the mud, who played in Mexico and played overseas. I think Juan, his senior year of college, maybe averaged six or seven points, and now he’s in the NBA contributing on an NBA team.”

But perhaps Toscano-Anderson’s biggest contributions came off the court. The winner of the 2019-20 NBA G League Community Assist Award, Toscano-Anderson was named a finalist for the inaugural Kareem Abdul-Jabbar Social Justice Champion award, which the league will give out to “a current NBA player for pursuing social justice and advancing Abdul-Jabbar’s life mission to engage, empower and drive equality for individuals and groups who have been historically marginalized or systemically disadvantaged.” Alongside Toscano-Anderson, whose nomination came because of his work with Black and Latinx communities, the finalists are Carmelo Anthony, Harrison Barnes, Tobias Harris, and Jrue Holiday. Each player chose a social justice-focused organization as part of their nomination, with the winner receiving $100,000 for their org and the remaining four finalists all getting $25,000 each.

The award is scheduled to be announced prior to Game 4 of the Eastern Conference Finals, whenever that comes to happen. Prior to that, Dime caught up with Toscano-Anderson to discuss his nomination and giving back to the community where he grew up.

How does it feel to know your first full season in the league is ending with recognition for your off-court work?

I think it’s really cool. I mean, there are thousands and thousands of basketball players out there, this league is filled with 400 other great basketball players. Basketball players are gonna come and go, and so people eventually forget what you did on the basketball court and unless you’re a Michael Jordan, or a Steph Curry, LeBron James. So for myself — I wouldn’t say I try to, but for myself, this is great to be acknowledged for something outside of on-court activity, and I’m really excited about it. I’m really humbled by it, and it’s really cool to just be acknowledged for it.

Are you someone who has always used whatever platform you have to give back to the community?

Prior to making it to the NBA, I didn’t even necessarily see myself as having a platform. I had like 8,000 followers on Instagram before I got to the NBA, now I have close to 300,000. So, it’s just been a huge growth for myself and my following.

So to answer your question, no, I didn’t always use my platform. I just did things wherever I could, whether that was giving a young kid in high school who has basketball dreams a few pairs of good basketball shoes, some fresh clothes, whatever the case may be. Helping a kid pay some fees for college applications or whatever. I just try to find ways to help people, connect the dots for people. You never know how something that could be so small to myself could be something in the way for other people. Somebody may not be able to afford a $200 application fee or some type of fee, but for myself, thank God that I’m able to afford things like that and that’s pretty light to me, so I just try to find different ways to help people in whatever they need.

One thing that I’ve come to learn is charity-focused athletes are that way in part because people in their lives hammered home giving back. Does that apply to you, and if so, who were those people?

I wouldn’t even necessarily say it was hammered home for me. My mother, 1,000 percent, she’s worked for the city of Oakland ever since I was born — I’m 28 now, so probably for 30, 31 years she’s been working for the city of Oakland. And when I was a kid, she worked with juvenile delinquents. My mom was a single mother, so on Saturdays when she had to go to work and do her juvenile delinquent programs, my brother and I would tag along because my mom couldn’t afford a babysitter and we had nowhere else to go, so we would tag along, and that became a regular thing for us every Saturday. Obviously as we grew up we continued to do those things. When Dorell Wright was with the Warriors, I would volunteer at his Christmas and Thanksgiving giveaways, also.

So, it just became second-nature for us. It was something my mom always has always done and it’s something that … we believe in doing the right thing and helping people, and so it comes pretty natural for my family and I.

I know you’ve been asked this question a million times through the lens of basketball, but as a Bay Area native, how much pride is there in knowing that the stuff you’re doing is helping people in your community?

It’s very humbling, it’s very gratifying. I grew up on 95th and Eighth Street, and on 98th and B Street, there’s a park, but the park was thrashed. I could never go play basketball there, so I had to walk all the way to 85th to use the Boys and Girls Club to go shoot hoops. In these neighborhoods, these kids don’t really have resources.

Can you give me a run through of that some of the stuff that you’ve done off the court and why those have been the areas of focus for you?

We’ve done a lot. I bought Christmas trees for Christmas, I bought 35 Christmas trees along with gift cards to Safeway, so families could have dinner, as well. I’m a shoe collector, but I’m not a hoarder. So when I buy new shoes I try to get rid of my old shoes, so I always find a young man who’s you know doing well in school, maybe pursuing basketball, I’m giving away basketball shoes — I try to find people who can use the things that I have. We adopt families for Christmas. My family and I, we adopt families for Christmas. We’ve done some stuff, sending a bunch of money and clothing and gear down to the small town that my family’s from. I do some free clinics in Mexico from time to time, I actually have an upcoming two-week tour of clinics that I’m going to do in Mexico, among many other thing, the list goes on.

Like I said, it comes very naturally for my family and I, it could be an everyday thing for us. There was a homeless family living outside of my mom’s job, we paid for them to stay in a hotel for a couple months to help them get back on their feet, and I’m so happy to see that they’re doing well. It was a small family of two parents and baby girl, and now they’re living in a home. I would never say that it is because of me and my family, but we just led a helping hand to those people who needed it. Those things are very gratifying.

There was a really great piece in The Undefeated a few months back where you said, “I’m not comfortable at all, I still feel like my back is against the wall,” and, “I want to do something to solidify myself, I want to have longevity in this league.” Now that this season is over, do you feel like you have solidified yourself as someone who is able to make a difference on and off the basketball court?

That’s why I admire guys like LeBron James — he could easily just be like, “I’m the greatest basketball player. I got a billion dollar Nike deal, I’m set.” But he continues to create opportunities for children in his schools, production companies, movie roles, all the stuff with Uninterrupted giving people platforms and things like that. That’s why I admire that guy, because he looks to raise the bar, and that’s my motto, just continue to raise the bar.

This interview has been lightly edited for clarity.