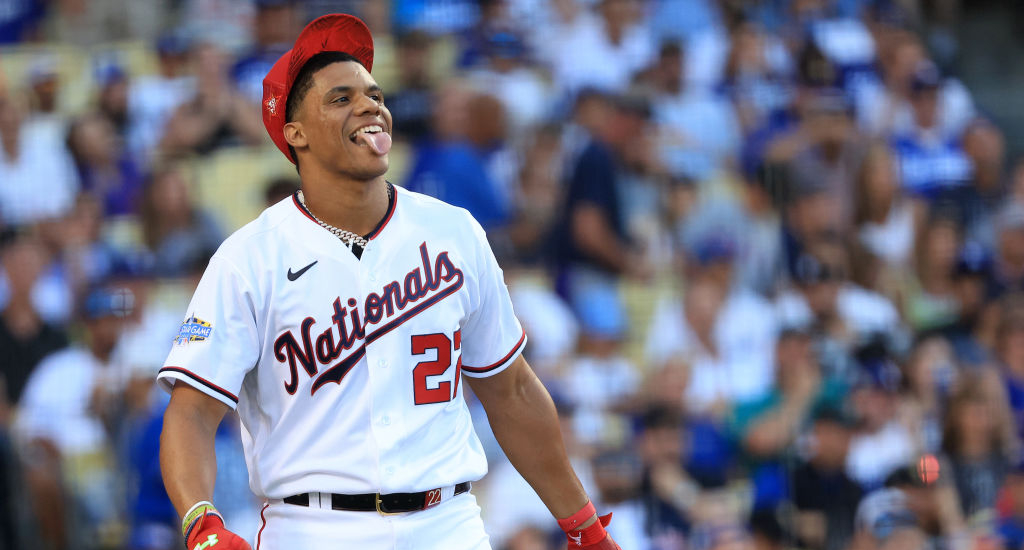 Heading into Monday evening’s 2022 MLB Home Run Derby, the top storyline was perhaps the pursuit of a third consecutive title from New York Mets slugger Pete Alonso. Ultimately, Alonso was not able to claim a three-peat at Dodger Stadium, but there were plenty of intriguing and memorable moments, both from young sluggers and from the oldest active player in Major League Baseball in future Hall of Famer Albert Pujols. In the end, however, it was Washington Nationals star Juan Soto winning the derby crown at the age of 23, defeating 21-year-old rising star Julio Rodriguez in the youngest-ever final in derby history.

The night began with a bang from Rodriguez, who defeated Corey Seager in the first head-to-head matchup. Rodriguez drilled 25 home runs in regular time, eventually posting a 32-homer total after bonus time, and his 32 home runs were the second-most ever in an opening round.

Alonso advanced through the first round after a win over Ronald Acuña Jr., blasting 21 home runs and leaving about 30 seconds on the clock with a breezy victory. He averaged 429 feet with his home runs, reaching a longest of 480 feet in the opening round.

That set up a highly anticipated semifinal matchup, with Rodriguez again setting an obscene pace. This time, he produced 31 home runs, becoming the first player ever to hit 30 or more in two different rounds within the same derby.

Alonso put forward a valiant effort but was unable to defend his crown, allowing Rodriguez to advance to the final. On the other side of the bracket, there were also plenty of fireworks. Soto didn’t need extra time to advance beyond the first round, producing well and conserving energy in the process.

Soto wasn’t necessarily the most prominent story on that side of the bracket, though, as Albert Pujols was making his final appearance in the derby. It appeared as if it might be a short run for Pujols, who was congratulated by all of his fellow All-Stars in the midst of his opening round.

However, Pujols was able to defeat Kyle Schwarber, who struggled mightily, with a seven-blast performance in the bonus round following a tie.

Pujols provided a memorable showing in the semifinal, finding a groove on a few occasions. However, Soto did enough to advance and set up the showdown with Rodriguez in the final.

In the opening salvo of the final, Rodriguez generated 18 home runs, reaching 81 total blasts through three rounds. He averaged 412 feet and 108 miles per hour in the final, putting pressure on Soto to string together a total barrage to defeat him.

On cue, Soto did just that. He heated up down the stretch of his original time, eventually blowing past the 18 mark in bonus time with plenty of time to spare.

Soto becomes the second-youngest derby champion of all-time, and he timed his biggest surge beautifully in the final. While it is not out of the ordinary in the current format, Rodriguez finished with considerably more home runs (81) than Soto (53) across three rounds, but it was certainly a night of young stars with a sprinkling of Pujols to round it out in Los Angeles.