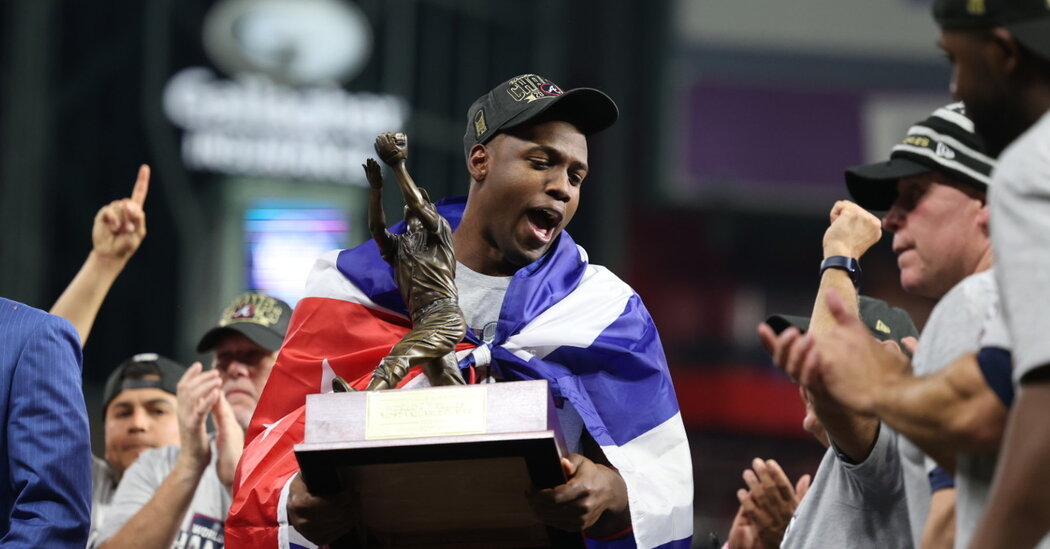 HOUSTON — Growing up in Cuba, Atlanta Braves outfielder Jorge Soler was already so tall by around 9 or 10, his father said, that people didn’t believe his age.

“He always wanted to play baseball,” Soler’s father, Jorge Sr., said in Spanish on Tuesday night. “From a young age, he had the talent. And he wanted to play in the big leagues.”

These days, Soler, now 29, isn’t simply playing in the big leagues; he is using his towering stature to blast balls entirely of stadiums, guide teams to championships and earn trophies.

On Tuesday, in Atlanta’s 7-0 win over the Houston Astros in Game 6 of the World Series that sealed the Braves’ first title since 1995, Soler smashed a mammoth three-run home run that left Minute Maid Park and left his teammates in awe.

It was Soler’s third home run of the Series — each of which had given Atlanta the lead in a game. His efforts earned him the World Series Most Valuable Player Award, joining pitcher Livan Hernández of the Florida Marlins in 1997 as the only Cuban-born players to earn the distinction.

“This means a lot to me,” Soler said in Spanish, with a Cuban flag draped over his shoulders while holding his daughter as he stood on the confetti-covered infield.

“This is the biggest thing that’s happened to me in my career, especially from where I come from, Cuba. It’s harder to reach here and reach the big leagues and have these results. It’s incredible.”

In 2011, Soler, at 18, left Cuba on a boat with his father to pursue his baseball dreams, his father said. A year later, he signed a contract with the Chicago Cubs for nine years and $30 million. In 2014, he was called up to the major leagues at 22.

Over the next two seasons, Soler flashed his tantalizing but still raw talent. During the Cubs’ World Series-winning season in 2016, he hit .238 with 12 home runs over 86 games but was largely relegated to coming off the bench during the postseason.

Traded to the Kansas City Royals that winter, Soler battled injuries, demotions and inconsistency. In 2019, his talent re-emerged: He hit an American League-leading 48 home runs, drove in 117 runs and played in all 162 games. But then his performance slipped over the next two seasons.

On July 29 of this season, Soler was hitting .192 with 13 home runs over 94 games with the Royals. Desperate to reinvigorate a team that was floundering and had lost key outfielders such as Ronald Acuña Jr., Atlanta traded the next day for Soler — one of four outfielders the Braves acquired at the trade deadline

“It was challenging at first,” Soler said through an interpreter. “I felt a little out of my comfort zone. I didn’t really know people. It was kind of tough to go to a new place and start making those acquaintances and everything. Within a week, I felt right at home.”

Soler blossomed with Atlanta, helping the team reach the postseason. But during the National League division series against the Milwaukee Brewers, Soler, who was unvaccinated, tested positive for the coronavirus and missed 10 days. He returned for the final two games of the N.L. Championship Series, felt bad about not being there for his teammates and vowed to get vaccinated as soon as possible. He then went on a tear during the World Series.

“We’ve known what he can do for so long,” Atlanta first baseman Freddie Freeman said. “I mean, two years ago he’s hitting 50 homers. It’s actually pretty incredible what he did in the World Series, getting Covid and missing 10 days and then coming back and not missing a beat. That’s hard to do in this game.”

In the first at-bat of the World Series, Soler clobbered a home run. In Game 4, his solo homer put Atlanta on top in a seventh-inning comeback. And in Game 6, he put Atlanta up for good when he connected on a hanging off-speed pitch from the Astros pitcher Luis Garcia and silenced a loud home crowd in Houston.

“Off the bat, I was saying, ‘I think it’s got a chance,’” reliever Luke Jackson said. “Then I realized it might never be found again.”

The home run’s distance was estimated at 446 feet but felt longer. Because the Minute Maid Park retractable roof was open, the ball flew over the train tracks in left field and, according to security guards, landed in a courtyard.

“Oh my God, that was an absolute bomb,” Atlanta reliever Tyler Matzek said of Soler, who is listed at 6-foot-4 and 235 pounds. “He’s one of the most physically gifted people I’ve ever seen in my entire life. He’s like an N.F.L. tight end out there swinging the bat. It’s unbelievable.”

After the game, Soler’s father admitted that he thought about their escape from Cuba often because it was a harrowing experience and it is what landed them here, standing on the field after another World Series title, this time with a series M.V.P. trophy.