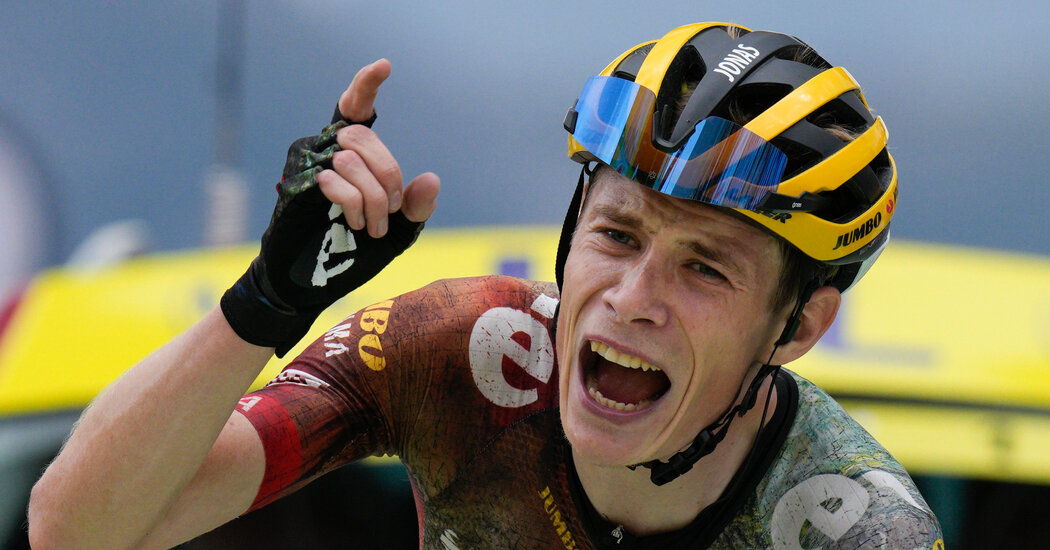 Jonas Vingegaard turned the Tour de France on its head on Wednesday with a sharp attack on the brutal final climb that won him the race’s 11th stage and snatched the leader’s yellow jersey from Tadej Pogacar.

On the day’s earlier climbs of the Col du Télégraphe and the Col du Galibier, Pogacar and Vingegaard traded attacks, with neither managing to get away for long. And at the bottom of the final climb of the finishing Col du Granon, just about all the key riders were massed together. In a cagey race, some might have expected that there would not be major changes to the overall standings at the end of the day.

But that theory didn’t reckon with the difficulty of the Granon, a punishing climb to nearly 8,000 feet above sea level that had been raced on the Tour only once before, in 1986. Simply put, Vingegaard thrived on it while Pogacar did not.

With about three miles to go, Vingegaard made a fierce attack. And Pogacar, who had controlled the race since it started on July 1, surprisingly did not — or could not — respond. Vingegaard caught a few riders who were up the road, raced on alone up the Granon and finished alone at the top of the mountain in impressive style.

An even more unlikely sight was playing out behind him on the mountain: Pogacar was clearly suffering. He seemed to crack in the final miles, falling back to finish seventh on the day, 2 minutes 51 seconds behind the winner. That gave Vingegaard the overall lead by 2:16 over Romain Bardet of France, who had a strong day. Pogacar dropped to third, now 2:22 behind.

Vingegaard, 25, of Denmark, emerged on the scene at last year’s Tour, when he was an unlikely second at the event’s finish in Paris, five minutes behind the favored Pogacar. Nevertheless, in the run-up to this year’s race, he was overlooked as a potential champion behind the Slovenes Pogacar and Primoz Roglic. But as Roglic faded over the opening 10 days, Vingegaard’s strong efforts made him the clear challenger to Pogacar.

Pogacar, the two-time defending Tour de France champion, still has time to claim a three-peat. Thursday’s Alpine stage ends with the signature switchbacks of Alpe d’Huez on Bastille Day. And there are tough stages to come in the Pyrenees next week as well as a time trial on July 23, a day before the race finishes in Paris. But Vingegaard has surely seized the advantage, along with the yellow jersey.

“It’s really incredible,” Vingegaard said after the stage. “It’s hard for me to put words on. This is what I’ve dreamed of.”

Of his many attacks, he said: “We wanted to make it a superhard race. We thought it was in my favor.”

Of Pogacar, he added: “On the Galibier over the top, he was really strong and he dropped everyone else, and I was a bit insecure if he was going full or not. And then on the last climb I was thinking, ‘If I don’t try, I’m not going to win.’”

Pogacar, racing for U.A.E. Team Emirates, shook Vingegaard’s hand after the race with a smile. But he had to be humbled by his own performance and wondering how he could possibly catch Vingegaard in the days ahead. Moreover, he has lost two of his seven teammates after they tested positive for Covid during the race, leaving him short of help in the high mountains.

“Tactically, they did a really good job,” Pogacar said of Vingegaard’s Jumbo-Visma team. “In the last climb, it was difficult. But we will see tomorrow. I want revenge. Le Tour is not over.”