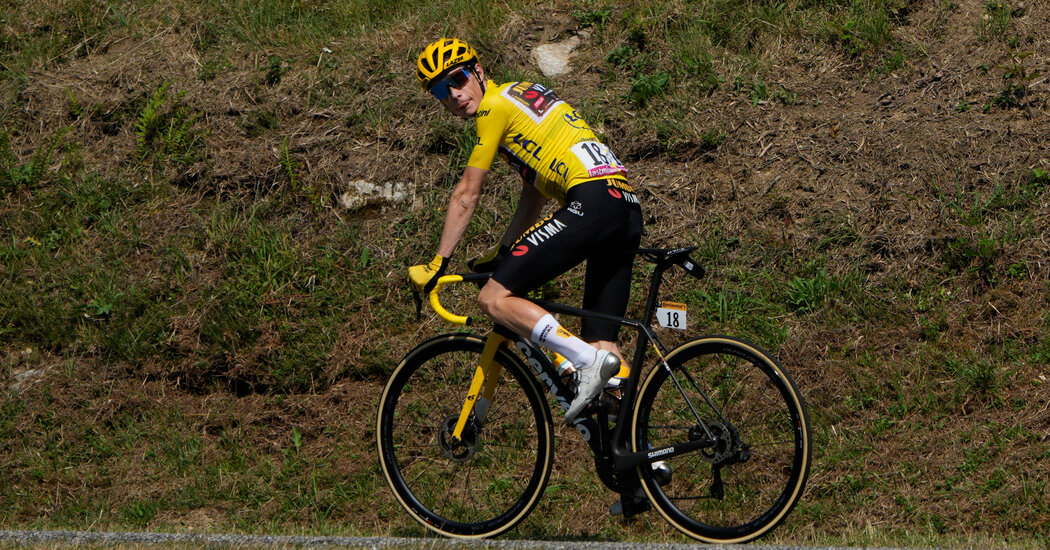 Tadej Pogacar’s last chance to position himself to win his third straight Tour de France arrived Thursday on the steep slopes of the Hautacam in the Pyrenees Mountains.

Pogacar had attacked the leader, Jonas Vingegaard, on the penultimate climb, but Vingegaard had answered. Now they were climbing the last big mountain of the Tour. With only a largely flat stage and a time trial to come before Sunday’s traditional celebratory ride into Paris, Pogacar knew that Thursday’s stage offered his last, best shot at shaving away most, or all, of the 2-minute-18-second margin between him and Vingegaard.

But his final attack never came. Instead, the Hautacam broke Pogacar. With two and a half miles to go, he silently slipped behind Vingegaard and his Jumbo-Visma teammate Wout van Aert, who was pacing him. Shortly afterward, Van Aert moved aside, and Vingegaard, wearing the race leader’s yellow jersey, mounted a solo ascent to the top of the mountain.

Rather than seeing Pogacar cut into his lead, Vingegaard had extended it, winning the stage by 1:04 and almost certainly clinching the Tour title. After factoring in a few bonus seconds, he now leads Pogacar by an effectively unassailable overall margin of 3:26, setting him up to win his first Tour at age 25.

“I was just happy that it finally ended,” Vingegaard said of Thursday’s final mountain stage, the 18th of 21 days of racing in the Tour. “It was incredibly hard, but of course I was really, really happy to win the stage.”

There had been two moments of drama on the descent before the big climb as Pogacar, looking for any opening, and Vingegaard, watching his every move, zipped downhill together. First Vingegaard, negotiating a gravelly road, wobbled and nearly fell

Advertisement
, one foot popping out of his pedals to keep his balance.

A moment later, Pogacar did fall, but he immediately climbed back on his bike, seemingly not too worse for wear. Vingegaard slowed to allow him to catch up, a show of sportsmanship acknowledged by a touch of hands between the rivals when Pogacar reached him again.

“I think he kind of missed the corner, and he went down into some gravel,” Vingegaard said of Pogacar. “And then he tried to steer it out, and the bike disappeared under him. Then I waited for him.”

Pogacar had come into the Tour as the favorite, his two straight wins giving the rider from Slovenia an aura of invincibility. He duly took the race lead this year, but lost it in the Alps when Vingegaard attacked on the Col du Granon. Vingegaard held on to the lead on the storied slopes of L’Alpe d’Huez, leaving Pogacar with little time to reclaim it.

Barring a crash, an illness or other calamity in the race’s final few days, Vingegaard, of Denmark, should have little difficulty holding that lead through a flat stage Friday, a time trail on Saturday and the ceremonial cruise to the Champs-Élysées in Paris.