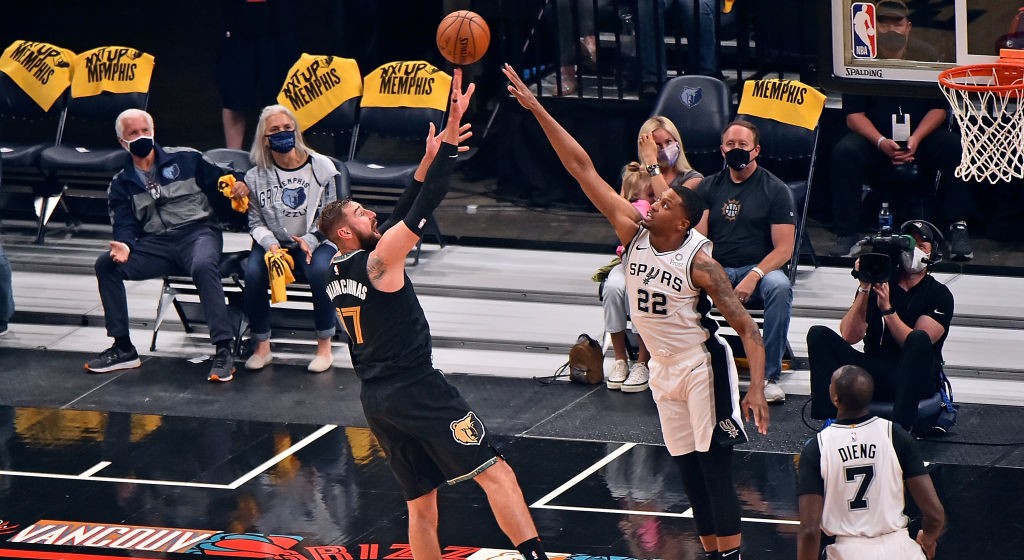 The Grizzlies played host to the Spurs on Wednesday night in the first play-in game for the Western Conference, with the winner moving on to play for the 8-seed and the loser going home. After a quarter of play, it looked as though we were in for a repeat of the East’s 9-10 matchup. Memphis ran out to a 38-19 lead going into the second, as San Antonio had no answers on either end of the floor for Jonas Valanciunas and Dillon Brooks.

However, the Spurs found their footing in the second, tying the game at one point thanks to a 22-3 run and ultimately only trailing by seven at the end of the first half. Dejounte Murray, Patty Mills, Jakob Poeltl, and Keldon Johnson all did their part in the second quarter run, and suddenly, we had a competitive game on our hands.

In the second half, it was once again a back-and-forth affair with Memphis in front most of the time, quickly ripping the lead back away from San Antonio any time the Spurs made a run to take a brief advantage. Valanciunas was nothing short of sensational, dominating inside on both ends with 23 points, 23 rebounds, and three blocks. The Grizzlies saw their lead evaporate every time he sat on the bench, and when he would return, it would grow again — with the end result being Jonas being a plus-26 on the night in a 100-96 win.

Brooks finished the game as Memphis’ leading scorer with 24 points, as he continues to impress with his two-way play and aggression on both ends. Brooks gave DeMar DeRozan fits for much of the night and on the offensive end he was in attack mode when the Grizzlies needed him to create some offense.

Closing things out was Ja Morant, who had a slow middle portion of the game but came alive in the fourth with some crucial buckets. He finished with 21 points, a team high six assists, and a highlight dunk early, as he is known to do.

For the Spurs, they just couldn’t find enough buckets against Memphis’ defense to make any of their runs stick. DeMar DeRozan and Rudy each had 20 points, but both needed 21 shots to get there. Murray had a triple double with 10 points, 13 rebounds, and 11 assists, but as just 4-for-17 from the field, and as a team they shot 35.1 percent from the floor. Memphis will now move on to face the loser of the highly anticipated nightcap between the Lakers and Warriors for the 8-seed, while San Antonio will go home for the second straight year without making the playoffs.