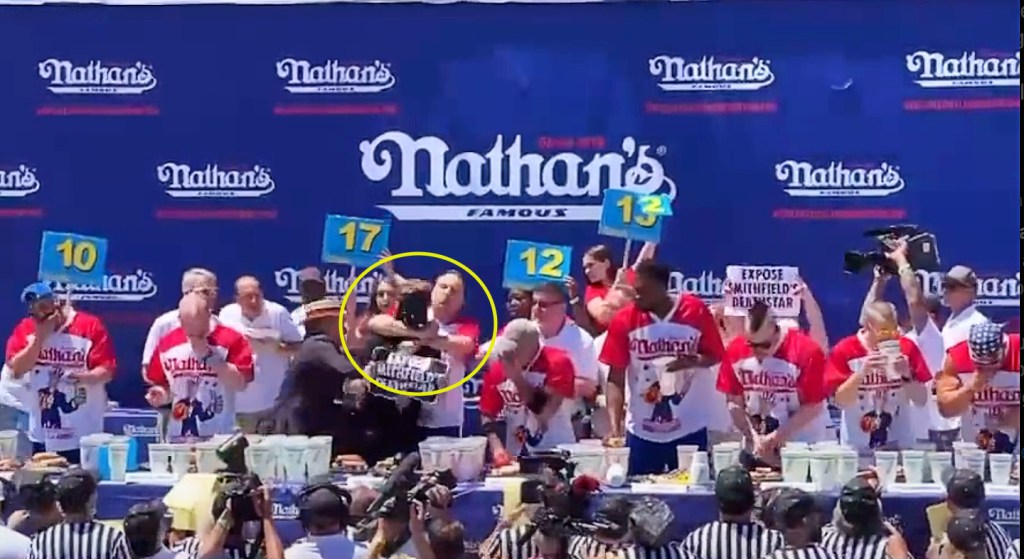 Joey Chestnut’s 15th Nathan’s Hot Dog Eating Contest championship was not without some drama. While he cruised to a win by downing 63 dogs, well shy of his world record but still enough to cruise to a 20 hot dog victory over the competition, he was interrupted briefly by a animal rights protester, who learned what happens when you get between Jaws and his dogs.

A protester wearing a Darth Vader mask and carrying a “Expose Smithfield’s Deathstar” banner rushed the stage and made it all the way to Chestnut before jumping in front of the champ to deliver his message. The problem was, Chestnut is about th at action and, despite being in a walking boot from a ruptured tendon, put the protester in a chokehold and threw them down, before getting right back to business and housing a couple more dogs.

The protester certainly got the publicity they wanted, but I’m not sure they were expecting to get wrassled to the ground by the champ in the process. Chestnut would rebound from that brief hiccup to dominate once again but this year’s feat might’ve been more impressive than his record-breaking performances, because none of those involved tackling someone mid-competition and then getting right back to it.