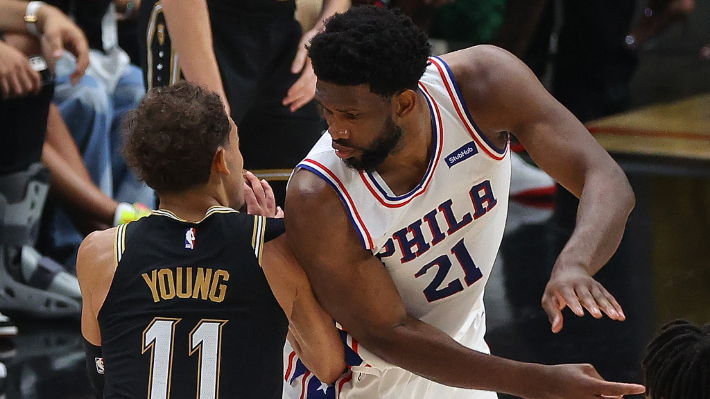 The Philadelphia 76ers forced a Game 7 in their Eastern Conference Semifinal series against the Atlanta Hawks on Friday night. While it wasn’t pretty, the Sixers were able to go into State Farm Arena and walk out with a 104-99 win, although their superstar big man did have one complaint about how things played out.

Following the game, Joel Embiid met with the media and expressed some frustration with the way things were officiated. He specifically pointed out the fact that Trae Young — who he referred to as “the point guard” — generally gets a pretty quick whistle, which does not always apply to him.

“I just felt like it wasn’t called both ways, especially because of the minimal contact that they get on the point guard, and when it comes to us, we don’t get the same thing,” Embiid said, per Dave McMenamin of ESPN. “So I just want it called both ways. If you’re going to call something like nothing on their point guard, it should be the same way and call the same thing [for] me when I get — if I get — touched.”

Embiid went on to claim that he was “hacked all night” by Atlanta’s various players. He does have a point that he didn’t spend a ton of time at the charity stripe — Embiid shot four free throws during the game and didn’t get to the line until the fourth quarter. Young, meanwhile, took five free throws on the evening.

There is a very real discrepancy between how much contact is needed for big men to draw a foul and how little is required for some guards. This is something Young knows, and is a major reason why he has earned a reputation for being one of the league’s most effective grifters. Now, no one in the league shot more free throws per game this season than Embiid, so he is really, really good at drawing fouls and getting to the line, but this feels, more than anything else, like an attempt to work the refs a little before a win-or-go-home game on Sunday.