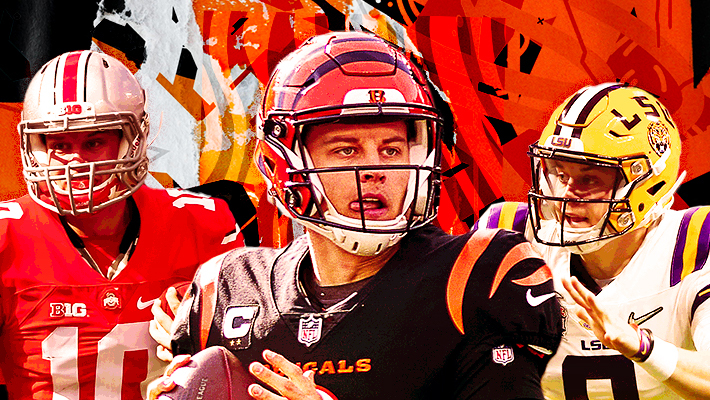 An argument can be made that Aug. 21, 2017 is the most consequential day in the recent history of the Cincinnati Bengals. About 110 or so miles away from Paul Brown Stadium, the Ohio State Buckeyes were in the midst of trying to figure out who would serve as the backup quarterback behind All-Big Ten signal caller JT Barrett.

One of the two guys battling for the job, three-star redshirt sophomore Joe Burrow, suffered a broken bone in his right hand. He got surgery the next day, and in the aftermath, four-star redshirt freshman Dwayne Haskins won the job. Burrow, an Ohio native, got a little run in Barrett’s stead the year before and looked good, but ultimately was not able to win the backup gig back. He threw 11 passes to Haskins’ 57 in 2017, and that following offseason, Burrow decided that the best thing for his career would be to transfer to LSU.

“I came here to play,” Burrow said after the Buckeyes’ spring game in 2018, per Eleven Warriors. “I didn’t come here to sit on the bench for four years. And I know I’m a pretty darn good quarterback. And I want to play somewhere.”

Things generally went pretty well in Columbus — Haskins took over in 2018, won the Big Ten, and led the Buckeyes to a victory in the Rose Bowl while finishing in the top-3 of Heisman voting before becoming a first-round pick — but of course, Burrow would go on to show that he is, indeed, a pretty darn good quarterback. After being a perfectly solid signal caller for an LSU team that went 10-3 in 2018, Burrow threw down quite possibly the best individual season for a college football player that these eyes have ever seen.

LSU’s offense in 2019 boasted an all-time great collection of skill position talent. The best wide receivers of the last two NFL Drafts came from Baton Rouge (Justin Jefferson in 2020, Ja’Marr Chase in 2021) and a third was a second round selection (Terrace Marshall Jr. in 2021). Add in first-round pick Clyde Edwards-Helaire at running back, and LSU had, quite literally, an entire starting unit of NFL players.

Still, Burrow was the straw the stirred the drink, and he did it better than anyone ever has in a single season. The team’s pass-happy offense saw its signal caller complete 76.3 percent of his passes for 5,671 yards with 60 touchdowns and six interceptions. Burrow was a unanimous All-American, won just about every award a quarterback can win, brought home the Heisman with the second-most first-place votes in history, and of course, parlayed all of this into a national championship and a No. 1 overall pick in the 2020 NFL Draft.

The thing that made Burrow so much fun to watch was his total control of his surroundings. Offensive coordinator Steve Ensminger and passing game coordinator Joe Brady built an offense around Burrow’s unflappable nature, accuracy to every part of the field, and the fact that the team’s pass catchers were so good that 50/50 balls were more like 70/30 balls when they were given a chance. Burrow’s deep accuracy, in particular, was put on display every week — his adjusted passing yards per attempt that season was the eighth-highest in FBS history, and stuff like this was commonplace.

It’s not hard to see why Burrow’s entire schtick would appeal to an NFL team, especially one like the Bengals, which had a decades-long history of bleak moments, could have really used someone who doesn’t really get shaken to be the face of the franchise, and also happened to have the No. 1 pick in the 2020 NFL Draft. Taking Burrow was as easy a selection as there was, and while he flashed during his rookie campaign, Cincinnati’s inability to consistently protect him eventually took its toll — in Week 11 against the Washington Football Team, Burrow dropped back and got hit in the leg, suffering a torn ACL that ended his season.

Cincinnati being bad last year afforded them the opportunity to get Burrow some reinforcements. The team had the No. 5 pick in the 2021 NFL Draft and saw Oregon standout offensive lineman Penei Sewell fall right to them, filling an obvious need. But instead of doing that, the team decided to bolster its already pretty good wide receiver room by reuniting Burrow and Chase. The pick raised some eyebrows — plenty of folks (the author of this piece included!) subscribed to the thesis laid out in this graphic — but the decision could not have worked out much better: Chase was a second-team All-Pro selection as a rookie.

The Bengals bet big on skill talent being able to make up for some holes up front, and so far they’ve been right. Chase (second) and Tee Higgins (18th) were among the league leaders in yards per reception, Tyler Boyd is a reliable third option, CJ Uzomah had a career year, and Joe Mixon gave the team a reliable option, both as a runner and a receiving option out of the backfield.

The biggest reason that gamble worked is because, well, Burrow is a pretty darn good quarterback. The sacks were again a problem — he was taken down 51 times, the most in the league — but Burrow didn’t allow constant pressure to rattle him. The second-year star led the NFL in completion percentage (70.4 percent) despite consistently attacking teams downfield — he also also led the league in yards per attempt (8.9). Burrow attacks secondaries with aplomb, but also understands the value of taking what a defense will give you if that’s the best option. Of all the traits that he put on display in college, though, none is more prominent than his ability to remain level-headed no matter the situation, something that Bengals coach Zac Taylor praised after the team knocked off the Kansas City Chiefs.

“When the game is on the line,” Taylor said, “he is going to figure it out.”

We’ve seen plenty of teams make it to the Super Bowl for the first time and promptly lose. Hell, the team that the Bengals are about to play made it to football’s biggest game in 2019 and got stuffed into a trash can by the New England Patriots. Losing in the Super Bowl has the potential to be an excellent learning experience … but of course, it’s far, far better to go out there and win the whole thing. We’ll find out in a little more than a week if that’s the case, but if the Bengals are able to lift the Lombardi Trophy for the first time in franchise history, it will almost certainly be because the guy who had to transfer because of a horribly timed injury has turned into one of the best quarterbacks in the sport.