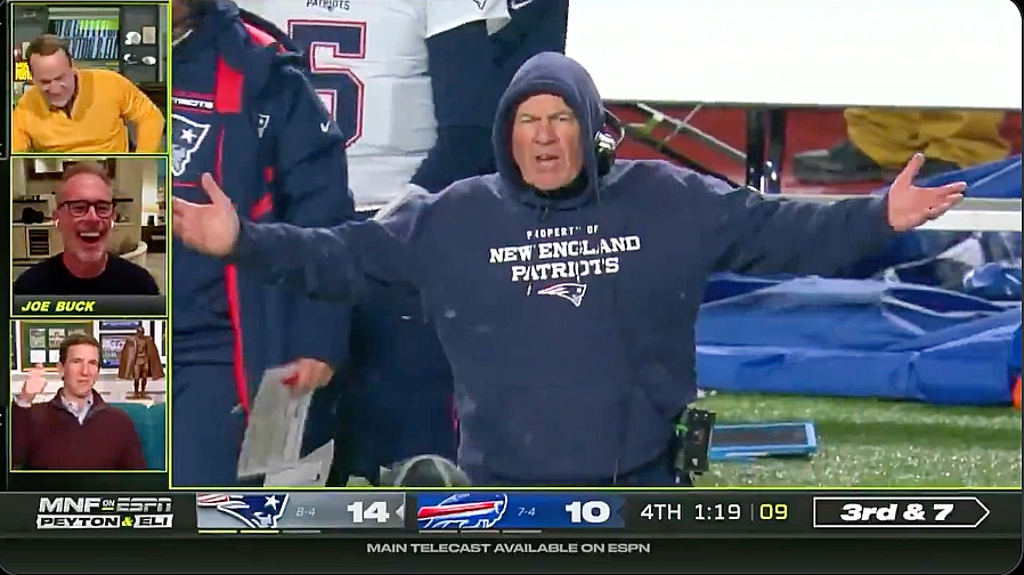 Monday night’s NFL matchup between the New England Patriots and the Buffalo Bills was fascinating on multiple levels. The headline was the weather conditions, prompting the Patriots to effectively stop throwing the ball entirely and forcing Buffalo into some incredible struggles that eventually led to a home loss. While the game was certainly interesting on its own, many observers drew even more enjoyment from watching the ESPN2 Manningcast with Peyton and Eli, and one of the best moments happened to involve Joe Buck in the closing moments of the night.

With the Patriots firmly in control in essentially clinching the win, Peyton asked Buck if he ever considered having a guest that Buck and Troy Aikman could interview to pass the time. The answer created fireworks and overall hilarity.

Buck roasting Peyton is A-plus television, and Eli’s reaction is also tremendous. Buck’s sense of humor is always sarcastic and dry in this way, but the delivery was perfect, burning Peyton about what might be the most painful loss he’s ever had, a 43-8 defeat in the Super Bowl at the hands of the Seahawks.

Granted, Peyton has had enough success to where that may not sting as much as one might think, but it really was the perfect answer to the question. Overall, this was another reminder of the Manningcast’s appeal, as it created a memorable moment even as the game was firmly in hand in the wee hours of the night.