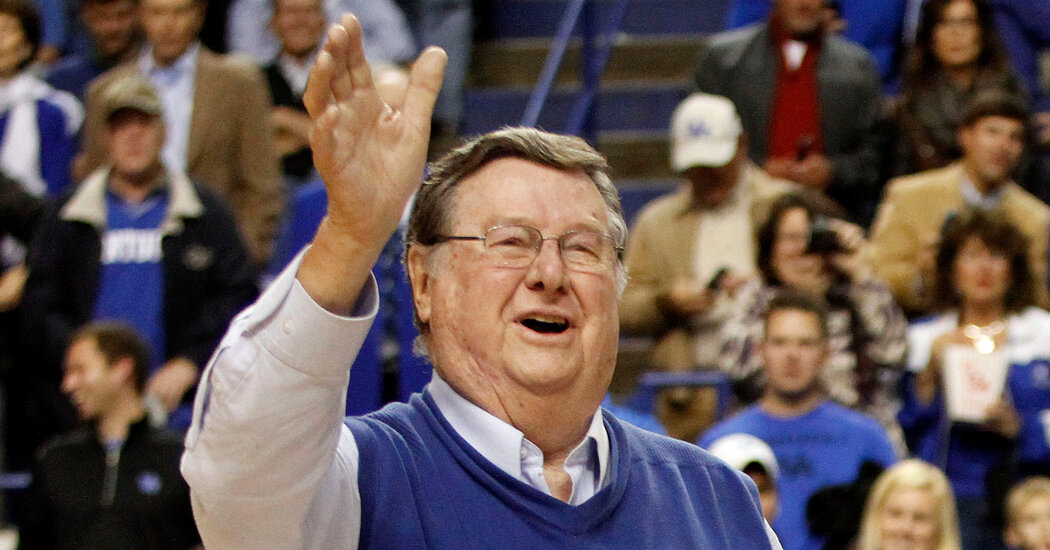 When Joe B. Hall became the University of Kentucky men’s basketball coach in 1972, he had no head coaching experience at a major college and he was succeeding one of the game’s legendary figures.

Hall’s predecessor, Adolph Rupp — the man they called the Baron — had turned basketball into as much a part of Kentucky’s landscape as its bluegrass and coal during his 42 seasons in Lexington. He coached four national championship teams, and at the time his 876 wins were the most of any coach in college basketball history.

In 13 seasons as Kentucky’s head coach (after seven as an assistant to Rupp), Hall faced second-guessing from some in the Wildcats’ fan base, which had a reputation for considering any season without a national championship something of a failure.

But Hall enjoyed considerable success. He coached Kentucky to an N.C.A.A. tournament championship and took the Wildcats to the Final Four three times. He was named coach of the year after Kentucky defeated Duke, 94-88, for the 1978 national championship, the Wildcats’ first N.C.A.A. title in 20 years.

His death was announced by the university, which did not say where he died.

Wearing thick glasses and speaking in a deliberate manner, Hall might have seemed a mild-mannered type. But he could be hard on his players.

After Kentucky was beaten by Louisiana State in February 1978, only its second loss of the season, Hall laced into his players when they faced the University of Mississippi.

“I’m through fooling with you,” The Courier-Journal of Louisville quoted him as saying. “It’s time you realize who you’re playing for. This is the big time, not some rinky-dink college.”

Kentucky beat Mississippi and then w on its next seven regular-season games before embarking on its tournament championship run.

Kentucky basketball teams had been all-white until 1970, when the 7-foot-2 center Tom Payne, who is Black, played in Rupp’s next-to-last season.

But Hall sought out Black athletes. Jack Givens, a forward, scored 41 points in the championship victory over Duke. Sam Bowie, Kenny Walker and Melvin Turpin, all outstanding Black players (and all of whom went on to play in the N.B.A.), were teammates on Hall’s 1983-84 squad, which went to the Final Four. Kentucky lost to Georgetown, the eventual national champion, in the semifinals.

Hall never had a losing season. His teams won eight regular-season Southeastern Conference championships, and he won 297 games while losing 100.

Not that Hall needed a reminder of the campus fixture whose place he had taken, but many of those victories came on the Wildcats’ downtown Lexington home court, opened in 1976: the 23,000-seat Rupp Arena.

Joe Beasman Hall was born on Nov. 30, 1928, in Cynthiana, Ky., where his father, Charles, ran a dry cleaning business and his mother, Ruth, had a flower shop. He played basketball and football in high school and built his strength by working on an uncle’s tobacco farm.

Hall played briefly as a sophomore on Rupp’s 1948-49 championship team, but transferred to the University of the South in Tennessee during the season to get more playing time.

He received a bachelor’s degree from Kentucky in 1955, coached in high school and was head coach at Regis College in Denver and Central Missouri State before he began coaching under Rupp.

Hall finally had an N.C.A.A. championship team in 1978, with the big men Rick Robey and Mike Phillips and the slick guard Kyle Macy starring along with Givens, but the coach and his players seemed burdened by high expectations.

Before the championship game with Duke, Hall said that Kentucky had experienced “a season without celebration” because of the pressure of being No. 1 in the national polls and the expectation that the Wildcats would win the national title.

Hall retired after the 1984-85 season, when Kentucky went 18-13 and was knocked out of the N.C.A.A. tournament in a West regional game. He later became a vice president of the Lexington Central Bank.

In October 1985, seven months after Hall coached his last game, The Lexington Herald-Leader reported that boosters had bestowed cash and other benefits on a number of his players over the years. The newspaper’s reporting — based on numerous interviews, many with Kentucky players from Hall’s tenure — won a Pulitzer Prize.

Hall said in a statement that he did not know any N.C.A.A. rules had been violated and that he “would not have permitted them had any been brought to my attention.”

The N.C.A.A. concluded in March 1988 that there was no proof of wrongdoing, but reprimanded Kentucky for not fully cooperating with its investigation.

In his later years, Hall was a co-host with Denny Crum, a former University of Louisville coach, on a sports radio program that aired in Kentucky.

The University of Kentucky had refused to put Louisville on its regular-season schedule for decades before agreeing to a game at the outset of the 1983-84 season. Kentucky won, 65-44.

Hall and Crum had been rivals, but time had a mellowing effect. As Crum told The Herald-Leader in 2011, “I don’t know how anyone could not like Coach Joe B.”