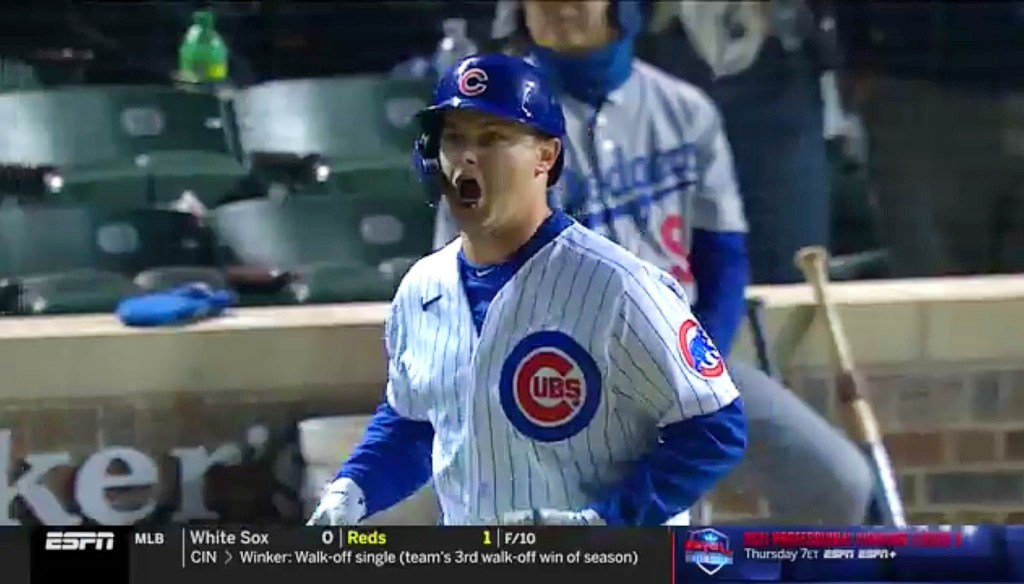 The Cubs and Dodgers found themselves locked in an extra innings battle on Wednesday night at Wrigley Field, with L.A. taking a 4-3 lead in the top of the 10th inning.

In the bottom of the 10th, Chicago got men on second and third with no one out after a walk and a wild pitch advanced the runners. Stepping to the plate in poetic fashion was former Dodger Joc Pederson. With a chance to win the game against his old team, Pederson got a hold of one and drove it deep to right center field. Pederson thought he’d hit a walk-off homer, and flipped his bat with some force across home plate in celebration.

There was one problem, he did not hit a home run and instead had hit a long sacrifice fly to tie the game.

Hitting a sacrifice fly is important, of course, but the Cubs were unable to capitalize further in the inning, as the Dodgers intentionally walked the next two batters and got Wilson Contreras to ground into a double play to send it to the 11th tied at 4-4. In case that wasn’t bad enough, in the top of the 11th, with runners on first and third, the Dodgers grounded into what should have been a double play, but instead scored the go-ahead run when Javy Baez tagged the runner at second assuming Anthony Rizzo had stepped six inches to his left to step on first before throwing it down. He had not, and the runner scored.

The good news was Matt Duffy had Pederson and Rizzo’s back, picking up a two-out RBI single in the bottom of the 11th to tie it up. Fittingly, it was Rizzo who, after a walk in front of him, got to atone for his fielding gaffe and hit a two-out single to plate Duffy and give the Cubs a win.

That means Joc gets to laugh about his bat flip rather than feel the shame of a premature flip in an eventual loss, and Rizzo got to right the wrong from the top half of the inning.