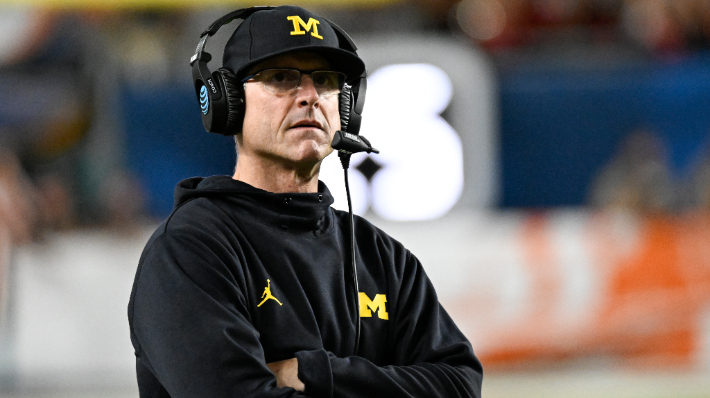 Jim Harbaugh is staying in Ann Arbor where he will continue to coach the Michigan Wolverines in 2022. After leading Michigan to a Big Ten championship, a berth in the College Football Playoff, and the program’s first win over Ohio State since 2011, reports indicated that Harbaugh was actively interested in a return to the NFL, interviewing with the Minnesota Vikings on National Signing Day.

While it had been reported for several weeks that Harbaugh was speaking to NFL teams about their job vacancies, Chris Balas of The Wolverine reported on Tuesday night that the expectation was Harbaugh would ink a deal with Minnesota. However, as Wednesday wore on, there was nothing indicating a deal was imminent, and in a rather stunning turn of events, Adam Schefter reported that Harbaugh was sticking with Michigan for the 2022 season and beyond, so long as the Wolverines want him.

Jim Harbaugh told Warde Manuel that this would not be a re-occurring issue and he would stay at Michigan as long as it wants him, per sources. https://t.co/d3NVS4EdLl

Prior to becoming the head coach of his alma mater’s football program in Dec. 2014, Harbaugh spent four seasons as the head coach of the San Francisco 49ers. He accrued a 44-19-1 record in that time and made the postseason during his first three seasons with the franchise, including a Super Bowl berth during the 2012 campaign where the Niners lost to the Baltimore Ravens, 34-31.

The general tone around Harbaugh’s future seemed to be the expectation that he was headed back to the NFL, but for whatever reason, he couldn’t part with Michigan and the Vikings coaching search will continue to other candidates. Whether Harbaugh’s long-term commitment to Michigan is genuine or just getting caught up in the moment will be something we’ll have to wait and find out about because his name has been in NFL rumors ever since he arrived in Ann Arbor.