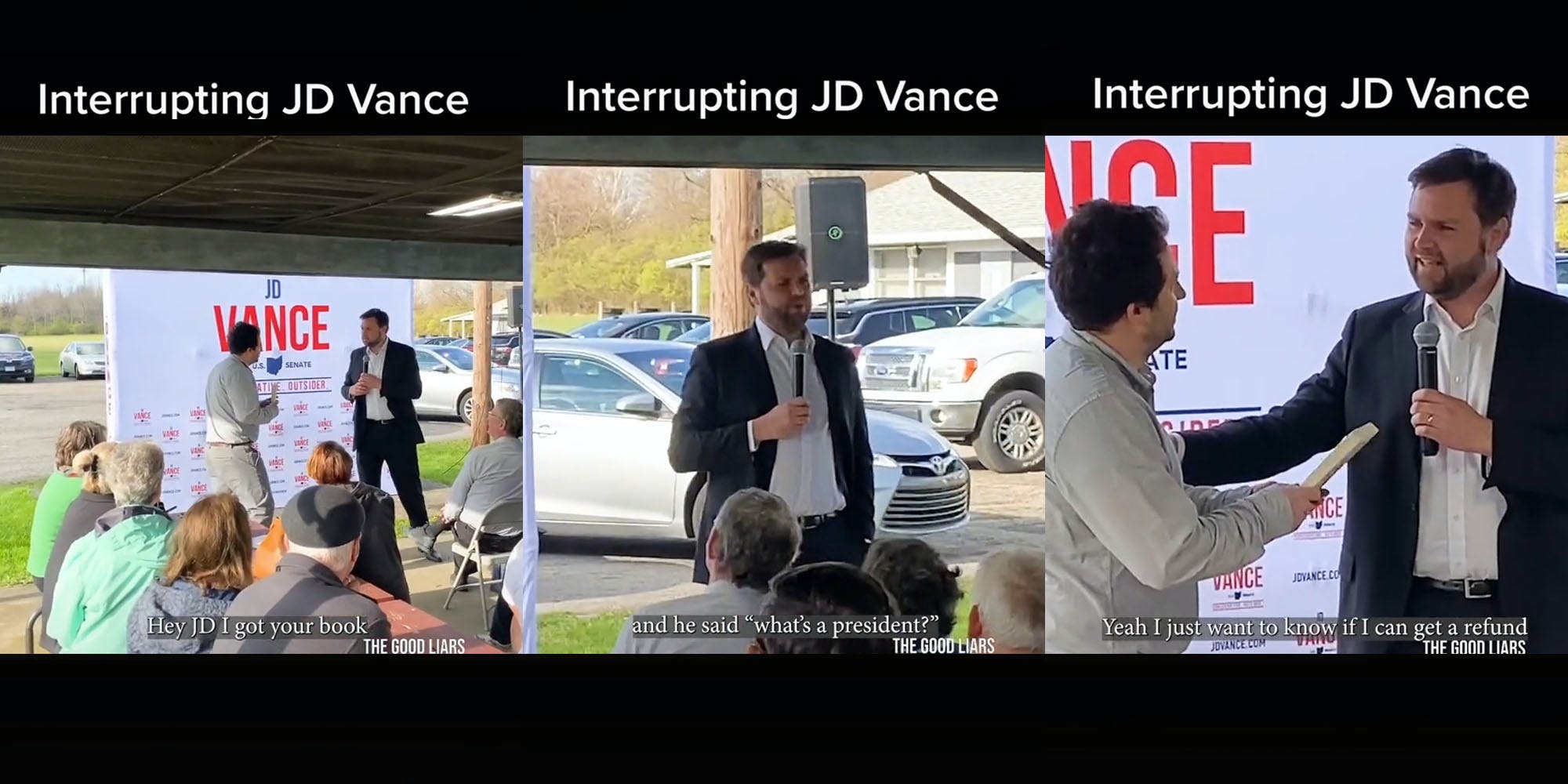 A comedy duo on TikTok pranked JD Vance and asked him for a refund on his book during a speech.

The video, which has nearly 40,000 likes and 350,000 views, shows a man approaching Ohio GOP Senate candidate JD Vance during a speech and asking for a refund on his book, Hilbilly Elegy.

“I just wanted to know if I could get a refund, I didn’t like the book very much,” the man says to Vance before being escorted away by two men who appear to be security.

“Do either of you guys have cash on you?” the man asks the security guards. “It just wasn’t that good, the main character wasn’t very likable.”

Hillbilly Elegy: A Memoir of a Family and Culture in Crisis was published in 2016 as a memoir by Vance about his upbringing in Middletown, Ohio, which is in the Cincinnati metropolitan area. The book paints a damaging portrayal of Appalachian culture and poverty, with Vance recounting his upbringing and experience with “hillbilly culture” and seeing the people around him, in his mind, encourage themselves and their peers to socially rot.

The book was praised on the right and subsequently panned by many on the left. Jared Yates Sexton wrote in Salon that the book was full of “damaging rhetoric” and praise of policies that “gut the poor.”

“The thesis at the heart of “Hillbilly Elegy” is that anybody who isn’t able to escape the working class is essentially at fault,” Sexton wrote. “Sure, there’s a culture of fatalism and “learned helplessness,” but the onus falls on the individual.”

Vance, after a surge in popularity following the Hillbilly Elegy movie on Netflix in 2020 and years of consideration, announced his candidacy for Senate in July 2021. Vance is running for the seat left open by retiring Sen. Rob Portman (R) and has moved further and further to the right since the announcement of his candidacy.

Vance previously tweeted that he was a “never-Trump guy” and called former President Donald Trump “reprehensible,” but has since taken back those remarks and adopted a Trump-like platform, leading to the endorsement of his campaign by Trump himself in April 2022.

Vance is leading in the polls ahead of the Republican primary next week, trailed by former Ohio State Treasurer Josh Mandel and investment banker Mike Gibbons.