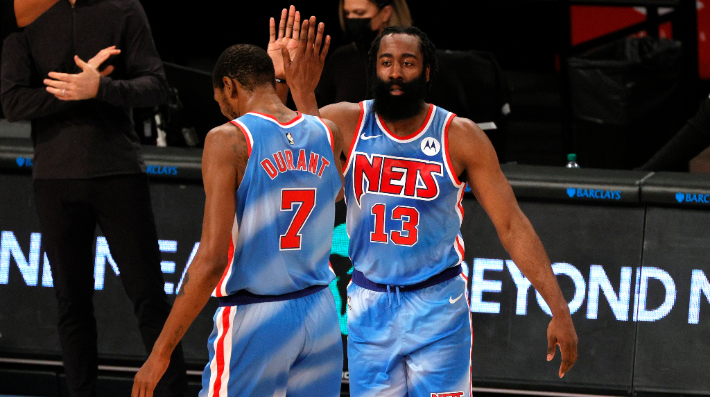 You’ll never believe this, but James Harden is still extremely good at basketball. Harden made his debut as a member of the Brooklyn Nets on Saturday evening against the Orlando Magic, and despite the fact the team was not at full strength — Kyrie Irving is still away on hiatus — Harden and his old running mate in Oklahoma City paired up to put on a show in a 122-115 win.

Harden, in particular, looked impressive, as he put up gigantic numbers despite not practicing with his new teammates before today. The Beard scored 32 points, dished out 14 assists, and pulled in 12 rebounds in the win, making him the first player in league history to have a 3o-point triple-double in his first game with a new squad. In fact, Harden became only the seventh player to register a triple-double in their first game.

It’s still pretty evident that Harden needs to figure some stuff out — he had a season-high nine turnovers in the win — but the big thing is that he looked far more loose and comfortable than he did at any point this season in Houston. Even when he was putting up big numbers, Harden was just visibly not happy with the Rockets, and it was fun to watch him show that he can be the MVP-caliber force we know he can be at his best.

This is something that is much easier to accomplish when you have a productive running mate, and Kevin Durant makes for one heck of one. Durant was sensational against the Magic, scoring a game-high 42 points on 16-for-26 shooting and hitting the 40-point mark for the first time as a member of the Nets.

As an added bonus, Durant managed to set a franchise record with his performance.

The Nets are, of course, not a finished product yet, as Harden needs to get fully integrated with his new squad and Irving’s return looms large. Saturday represented the first step on what will be a long journey, though, and the good news for Brooklyn is it did not trip up.