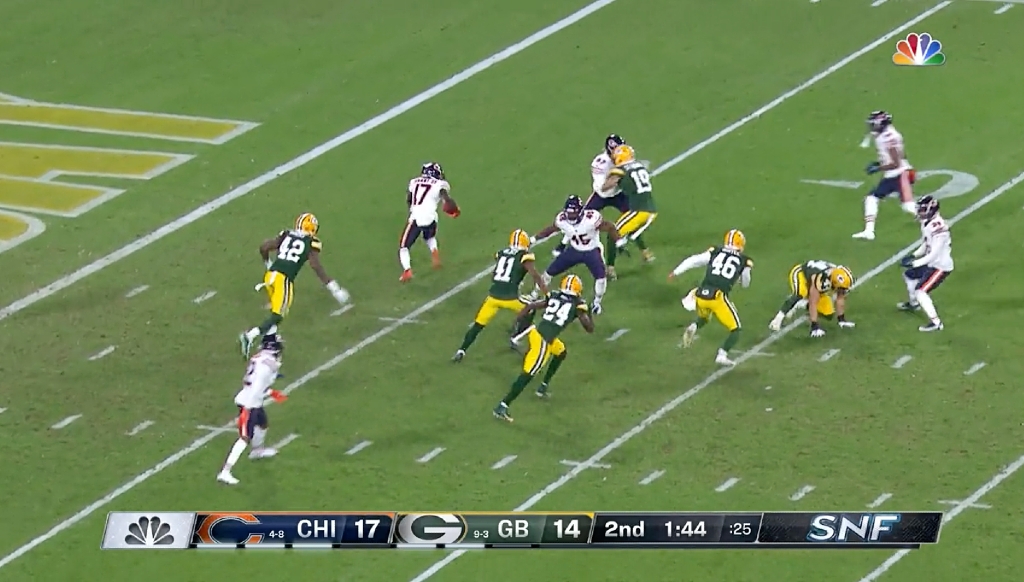 The Chicago Bears have been one of the NFL’s worst offenses this season, and while Justin Fields was returning to the starting lineup on Sunday night against the Packers, few anticipated a huge breakout coming against their rivals in Green Bay.

However, the Bears were keeping pace in an early shootout, leading 17-14 in the second quarter thanks to a pair of touchdown passes from Fields. After forcing a Packers punt near midfield, Chicago’s offense figured to be backed up as Jakeem Grant made what is usually an ill-advised decision to field a punt inside his own five yard line. The good news for the Bears was Grant, already with a touchdown on the night, made up for committing a cardinal sin of punt returners by somehow escaping a wall of Green Bay defenders to find the sideline and breakout for the first punt return touchdown in the NFL this season, going 97 yards to the house.

It’s certainly one way to give your offense a boost, scoring with them seated on the sideline. It’s a sensational job by Grant to set up a wall of blockers by darting right and then cutting back hard to the left sideline, causing the Packers coverage unit to overflow, get out of their lanes, and then it’s just all speed to get him to the end zone.

Unfortunately for the Bears, Grant’s touchdown might’ve been too quick, as the Packers had the answer to make it 24-21 going to halftime in a rather surprising shootout in Green Bay that went over the full game total in the first 30 minutes.