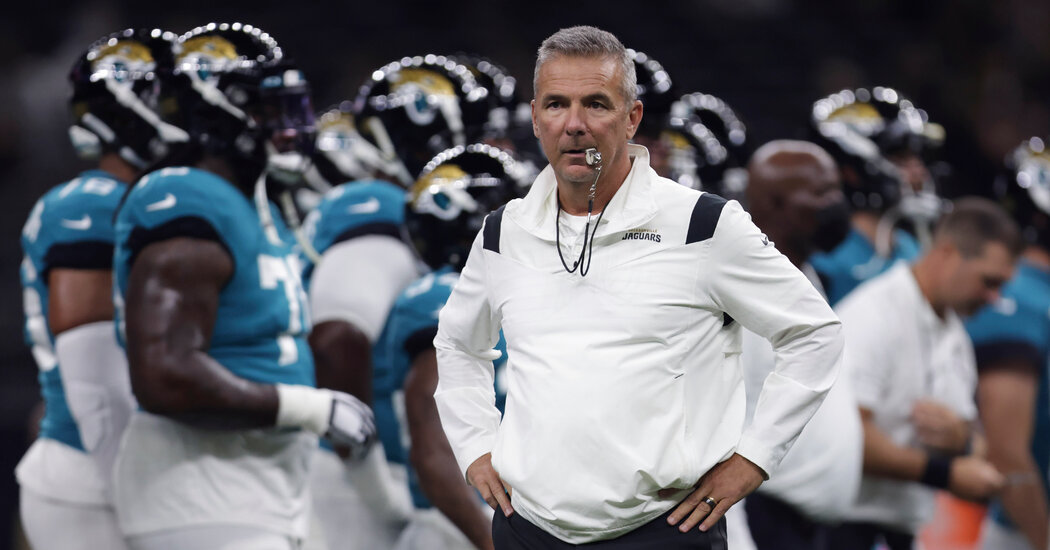 Urban Meyer was fired as coach of the Jacksonville Jaguars, ending his turbulent tenure in the N.F.L. — which was marked by tensions with coaches and players, and questions about his off-the-field conduct — after less than a season.

One of the most successful coaches in collegiate football history, Meyer was initially heralded as a savior for the troubled franchise. But his time in Jacksonville got off to a rocky start and only got worse on the field, where the Jaguars are 2-11.

“After deliberation over many weeks and a thorough analysis of the entirety of Urban’s tenure with our team, I am bitterly disappointed to arrive at the conclusion that an immediate change is imperative for everyone,” Shad Khan, the Jaguars’ owner, said in a statement issued after midnight Thursday in Jacksonville.

Meyer, 57, who won three national titles as coach for Florida and Ohio State, was at the heart of off-the-field drama from his start with the Jaguars.

The final straw appeared to come on Wednesday, when The Tampa Bay Times reported that a former Jaguars kicker, Josh Lambo, claimed that Meyer kicked him during warm-ups at a practice in August. Last week, an NFL Network report citing unnamed sources said that Meyer was condescending and contentious in his dealings with players and assistant coaches.

In October, after a loss to the Bengals in Cincinnati, Meyer did not travel back to Jacksonville with the team, saying he wanted to spend time with his grandchildren. A video soon circulated of a woman, who is not his wife, dancing near Meyer’s lap at a bar in Ohio.

The breach was highly embarrassing to the team, which was already off to a poor start. Khan declined to fire Meyer after the episode, saying in a statement at the time that Meyer’s actions were “inexcusable” and that he must “regain our trust and respect.”

Khan acknowledged the previous indiscretions in announcing his decision to replace Meyer. “As I stated in October, regaining our trust and respect was essential,” Khan said in the statement on Thursday morning. “Regrettably, it did not happen.”

Meyer enjoyed enormous success at the college level, where his teams were 187-32 (.854), but scandals and stress- and health-related issues caused him to resign or retire three times in his career. Thirty-one of his players were arrested during his time at Florida, while at Ohio State, he protected a longtime assistant with a history of domestic abuse.

The drama quickly followed Meyer to the N.F.L.

Less than two days after being hired, Chris Doyle, Meyer’s director of sports performance, resigned in February amid a public backlash over accusations that he made racist remarks and bullied people while he was a strength and conditioning coach at Iowa.

The N.F.L. fined both Meyer and the team in July for violating league no-contact rules for off-season practices, and the Jaguars were ordered to forfeit two organized team activity sessions in 2022.

The N.F.L. Players Association in late August opened an investigation after Meyer said in a news conference that the vaccination status of players influenced his decision to reduce the size of the team’s roster during training camp.

Compounding matters, the on-field product was poor. After Jacksonville finished 1-15 last season, Meyer was hired with high hopes that he could inspire a quick turnaround, but the Jaguars have won just two games and are tied for the second-worst record in the league.

Khan, whose team has made the playoffs just once since he bought the franchise a decade ago, hired Meyer after first meeting him years ago. They had an in-depth conversation at an N.F.L. party before the Super Bowl in February 2020 in Miami Gardens, Fla., and Khan said he was impressed with Meyer’s leadership traits.

Khan poached Meyer from a television analyst position at Fox Sports, despite competition from other teams, by convincing Meyer that he could remake the franchise in his image.

Meyer, already a hero to college football fans in northern Florida, drafted quarterback Trevor Lawrence with the No. 1 overall pick in April, as part of his plan to turn around an organization that has experienced only eight winning seasons since joining the league as an expansion team in 1995.

The aspirations were bold, especially considering that college coaches have traditionally struggled in the N.F.L. High-profile failures include Lou Holtz and Bobby Petrino, both of whom resigned in the middle of disastrous first seasons for the Jets and the Atlanta Falcons.

Only three coaches — Jimmy Johnson, Barry Switzer and Pete Carroll — have won both a college national championship and a Super Bowl.

At a staff meeting in March at TIAA Bank Field, nearly two months after he was hired as coach of the Jaguars, Meyer offered a self-imposed timeline for success.

Within three years, he said, if the Jaguars’ team logo was not respected, “then you’re probably looking for a new coach and we’ve not been very successful,” he told the 120 people listening.

Three years turned out to be too optimistic. Meyer did not even last one season, and the Jaguars logo has been tarnished once again.

The job for perspective candidates should be appealing, with a high draft pick in 2022, a young quarterback and a fan base craving some stability. The circumstances are essentially identical to the opportunity Meyer was handed.