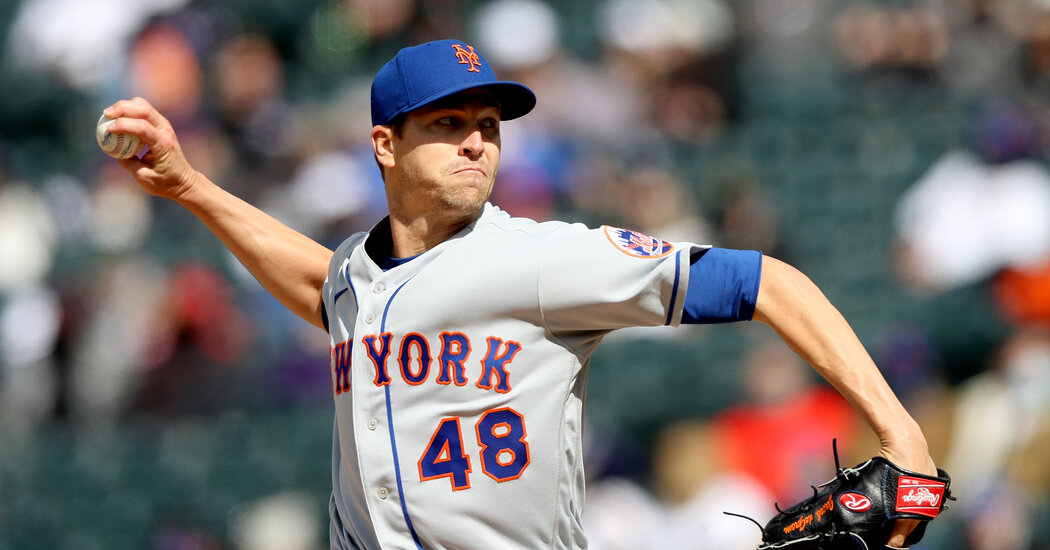 He fell short of the record and nearly missed a win.

DeGrom finished with 14 strikeouts to lead the Mets over the Rockies, 4-3, in the first game of a doubleheader.

German Marquez pitched a two-hitter for his second career complete as the Rockies won the nightcap, 7-2, stopping a seven-game losing streak and the Mets’ four-game winning streak. Josh Fuentes broke open the game with a three-run homer in the fifth off Jacob Barnes.

DeGrom, a two-time winner of the N.L. Cy Young Award, wound up with a win when trailing at his final pitch, just the third time that has happened and the first since 2015.

Seaver set the consecutive strikeouts record against San Diego on April 22, 1970, fanning his final 10 batters in a 19-strikeout performance.

“That would have been nice to reach but fell a little short,” deGrom said with a smile.

Coming off a 14-strikeout performance in a 3-0 loss to Philadelphia, deGrom became just the ninth pitcher to strike out as many as nine in a row.

“The fastball was the best weapon for him,” Mets manager Luis Rojas said. “It’s special. You don’t see that often. You talk about Jake getting better every year and he goes out there, and we talked about the challenge of the weather, so it’s a little bit of a different start. He makes an adjustment and does something special.”

The streak ended in the fifth inning, when the Rockies took a 3-1 lead with three unearned runs, but the Mets rallied to win a series opener delayed a day by snow when pinch-hitter Jonathan Villar hit a tying double off Daniel Bard (0-1) in the seventh inning and Dominic Smith had a sacrifice fly.

Pete Alonso had homered in the sixth to pull the Mets within a run.

By winning the opener of a doubleheader of seven-inning games under coronavirus protocols, the Mets extended a winning streak to four for the first time since 2019. Joey Lucchesi (0-1) allowed four hits and three runs over three innings in taking the loss in the second game.

DeGrom (1-0) allowed three unearned runs and three hits in six innings and walked one, lowering his ERA to 0.45.

No further explanation is necessary. The Reds beat Cleveland, 3-2.

Sluggish to start their A.L. title defense, the Tampa Bay Rays have found their bearings in the Bronx.

The Rays won their second straight in this series after enduring a 3-8 stretch, improving to 7-8 overall. Tampa Bay is 4-1 against the Yankees this season and 7-1 at Yankee Stadium since the start of 2020. They have won seven straight series against the Yankees, including last year’s division series, and have taken 17 of 22 games since September 2019.

“Whatever you’re going through before you get here, you better find a way to wipe it out,” Cash said. “Because you have to stay at the top of your game to compete here.”

The Yankees dropped to an A.L.-worst 5-9, the latest into a season the team has been at the bottom of the league since a 9-17 start in 1991, per the Elias Sports Bureau. Fans in the Bronx again booed the team as they lost their fourth straight, but the crowd was more restrained a day after some hurled baseballs and other items on the field late in an 8-2 loss to the Rays.

“I felt like we were much more in the fight today, which is at least a good thing,” Yankees Manager Aaron Boone said. “But we don’t want moral victories right now.”

Yankees catcher Gary Sanchez was hit in his right throwing hand by a foul ball in the fourth and exited an inning later. The club said X-rays were negative and that Sanchez is day to day with a contusion on his right index and middle fingers.

Limited to three hits Friday, the Yankees got only a single each from D.J. LeMahieu and Aaron Hicks over the first six innings. The team left seven on base and went 1 for 7 with runners in scoring position, dropping to 20 for 90 (.222) this season with men on second or third.