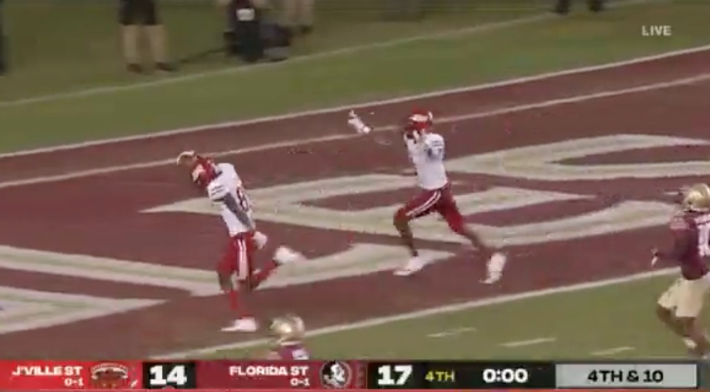 Last week, Jacksonville State took on UAB and got blown out, with the Dragons coming out on top, 31-0. The No. 16 team in FCS, Jacksonville State had to try and bounce back against another FBS squad this week in Florida State. The difference this time around was that the Gamecocks didn’t just win, they did so in spectacular fashion.

Jacksonville State entered the fourth quarter trailing 17-7. The team played stout defense, scored on an 11-play, 97-yard drive, stayed solid defensively again, and got the ball back with 1:23 left in the game and 83 yards between themselves and the end zone. What happened next: A 10-play, 83-yard drive that took up the duration of the clock and ended with a touchdown to shock the crowd in Tallahassee.

The game-winning score came on fourth-and-10 with six seconds left and the ball on the Gamecock 41. Former Clemson quarterback Zerrick Cooper dropped back and found Damond Philyaw-Johnson, who, with all due respect, absolutely should not have scored here. But he somehow managed to make two Florida State defenders miss and got one extremely good block to walk it off.

The call on Florida State radio was simultaneously mad and disappointed.

To celebrate, some players planted a flag at midfield at Doak Campbell Stadium.

The fine folks in Las Vegas had the Gamecocks as 28-point underdogs entering Saturday evening. While they’re usually spot on, Jacksonville State made sure they got this one quite wrong.

LeBron James Laughs at Your ‘Old’ Lakers Memes. After His Nap.

What We Learned From Week 3 of the N.F.L. Season