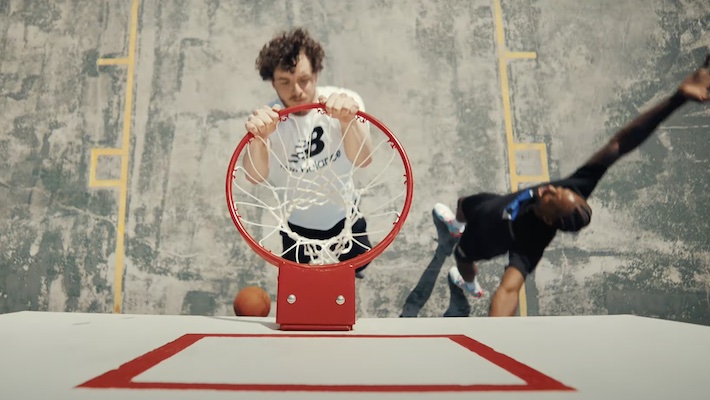 It seems as though Jack Harlow is tired of getting dunked on by Brandy, so why not let Kawhi Leonard have a turn instead? And while Leonard didn’t play a single game in the 2021-22 NBA season while he was rehabbing a knee injury suffered in the previous season’s playoffs, he showed in a brand new commercial for New Balance kicks that he’s ready to fly — although his defense might need some work before he’s at 100% again.

In the new spot for New Balance’s “We Got Now” campaign that is airing during the NBA playoffs, Harlow and Leonard are squaring off on a hilltop basketball court in a friendly game of one-on-one. Harlow, who’s set to star in the re-boot of White Men Can’t Jump, shows off his handles, before checking the ball to the Los Angeles Clippers star and the game begins. Leonard makes a fancy dribble before throwing down an uncontested dunk. They both sink an outside shot in each other’s face (Harlow with the skyhook!) before both taking the ball to the rack and throwing down a slam dunk. Now Kawhi can dunk in his sleep, but did anyone know that Harlow had that in h is arsenal?? The “First Class

Advertisement
” rapper is six foot three inches tall, but some people on social media weren’t so sure that this was a regulation hoop.

“Is the New Balance ad suggesting Jack Harlow can dunk on a full height rim?,” on Twitter user asked. “There’s absolutely no way in hell jack Harlow can dunk,” another protested. While a third got punny in saying, “Just saw an ad and jack Harlow dunked…? Wtf white men can dunk.”

Is the New Balance ad suggesting Jack Harlow can dunk on a full height rim? #nbaplayoffs

There’s absolutely no way in hell jack Harlow can dunk

Either way, the game between the pair was all love and we’ll see what Harlow brings to the Hollywood court in the upcoming flick.