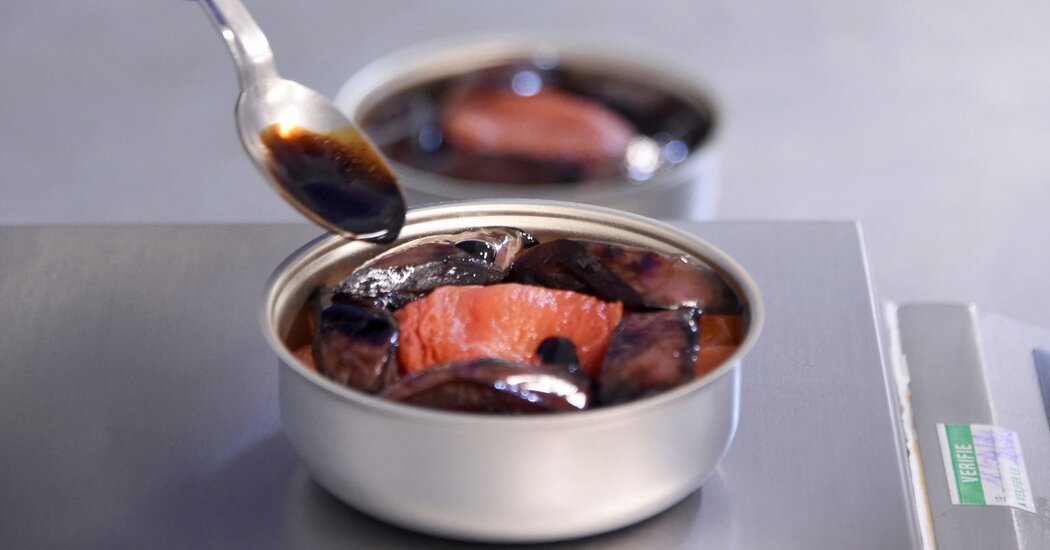 “There are small tricks like this to produce umami that will reveal certain flavors,” he said.

Mr. Marx’s dishes were assembled in the cans by hand to offer the visual flare of fine dining.

François Adamski, the corporate chef of Servair, also had to experiment with his recipes. A risotto-like dish used einkorn, an ancient wheat grain, instead of rice, to add some crunchiness, and sauces were thickened so droplets were less likely to float away.

The history of French chefs cooking for astronauts goes back to 1993 when a French astronaut, Jean-Pierre Haigneré, returned from a visit to Russia’s Mir space station and said everything in space went well except the food.

Richard Filippi, a chef and cooking instructor in southwest France, heard Mr. Haigneré’s complaints on the radio and contacted the National Centre for Space Studies — France’s equivalent of NASA — offering to help. Mr. Filippi and his students then cooked up beef daube, quail, tuna and lemon confit and other foods that accompanied French astronauts on subsequent missions to Mir in the 1990s.

When the French space agency looked to restart the program in 2004 for the International Space Station, Mr. Filippi had retired and suggested Mr. Ducasse.

The first of Mr. Ducasse’s food for the agency was eaten in space in 2007. Mr. Ducasse’s team has now come up with more than 40 recipes for astronauts, including recent additions like flourless, gluten-free chocolate cake and vegetarian options like carrot clafoutis with smoked paprika and quinoa cooked with saffron broth and vegetables.

“We have a lovely lobster, with some quinoa, with a lemon condiment,” said Jérôme Lacressonnière, the chef director of Mr. Ducasse’s consulting company, which is producing the space food. That is despite having to cook it longer and hotter than would be acceptable at a Ducasse restaurant on Earth.