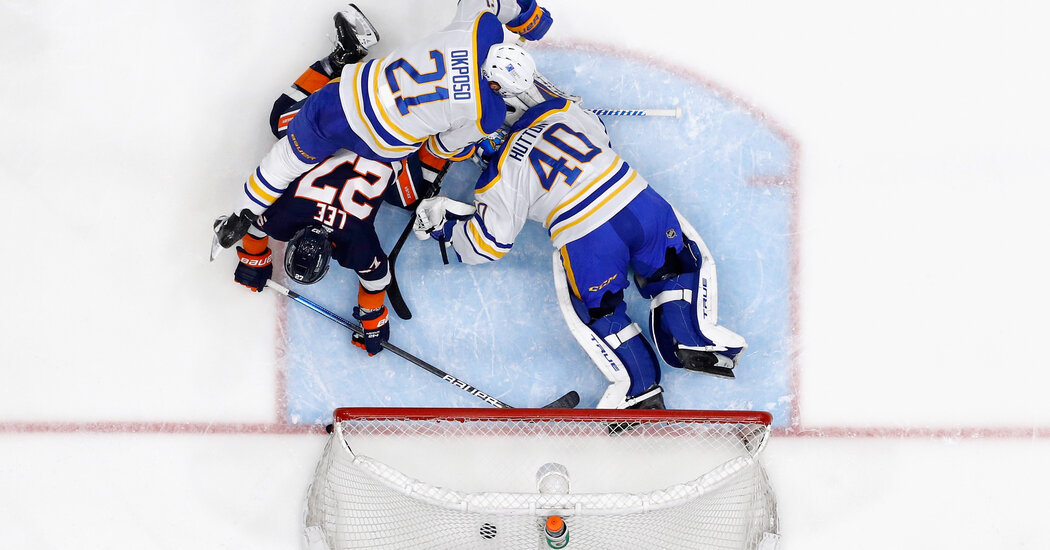 Anders Lee, the Islanders’ captain, will miss the rest of the 2021 season with a knee injury, Lou Lamoriello, the team president and general manager, said Wednesday.

Lee, 30, had injured his right knee during last Thursday’s home win over the Devils when he became entangled with the Devils forward Pavel Zacha. Lee is tied with Brock Nelson for a team-leading 12 goals on the playoff-contending Islanders (19-7-4). Lamoriello anticipated that Lee would be ready for next season following his recovery.

“It’s an A.C.L. and that’s as far as I will go,” Lamoriello said in a video news conference. “Doctors are extremely comfortable with 100 percent recovery because of the type of injury that he has.”

He added: “It will not be as bad as a lot of A.C.L. injuries are because there is nothing else damaged.”

Before the injury, durability had been a hallmark for Lee, who signed a seven-year, $49 million contract with the Islanders in July 2019. He was playing in his 295th consecutive game when he was hurt. Lee, drafted in the sixth round by the Islanders in 2009, has 184 career goals in 520 games.

Lee’s absence creates a dilemma for Lamoriello, who must decide whether to trade for a temporary replacement or stand pat with the current squad, whose 42 points is tied with the East Division-leading Washington Capitals with 26 games remaining in the regular season. The Islanders have a 9-1 record in their past 10 games and have been particularly strong at Nassau Coliseum throughout the season, holding a 12-0-2 record there heading into home games against Philadelphia on Thursday and Saturday.

With Lee on long-term injured reserve, the Islanders will have some salary cap flexibility for the rest of the season and thus the chance to acquire a scoring forward like Buffalo’s Taylor Hall or the Devils’ Kyle Palmieri, who will become unrestricted free agents after the season.

“It certainly changes our focus,” Lamoriello said. “You lose a player like that, the role that he plays — our leading goal-scorer up until his injury. If we can get ourselves better, we will. But we will not do something just for the sake of doing it.”

Lee brings a fierce presence to the lineup, unafraid to place himself in front of an opponent’s net to screen the goalie and take the physical punishment that comes from it. He has thrived on a line with the winger Jordan Eberle and the scoring center Mathew Barzal.

In Lee’s absence, Islanders Coach Barry Trotz had placed the 22-year-old winger Kieffer Bellows into Lee’s spot. Bellows, drafted in the first round by the Islanders in 2016, also has a rugged style of play and scored three goals in two wins over the Devils last weekend.

Lee’s quiet leadership had benefited the Islanders, who have reached the playoffs the past two seasons under Trotz and appear to be poised to make their third consecutive postseason appearance, but this time without their captain. Lee also missed the team’s playoff run in 2016 when he suffered a broken left fibula in a late-season game against the Rangers.

Lee has earned the respect of teammates and Islander alumni alike through his play and organization of charity events. When the Islanders retired the four-time Stanley Cup winner John Tonelli’s No. 27 last year, Tonelli made a point of praising Lee, who continues to wear No. 27 with Tonelli’s approval.

As the Islanders move forward without Lee, Lamoriello maintains confidence in his players, who reached the conference finals last summer.

“We’re not asking someone to do anything different, just to maximize their talents,” he said. “Collectively that’s how you have success. I have said this day in and day out through my whole career, individual players will help you win games but teams will win championships. All teams go through these types of obstacles. You just have to overcome them.”