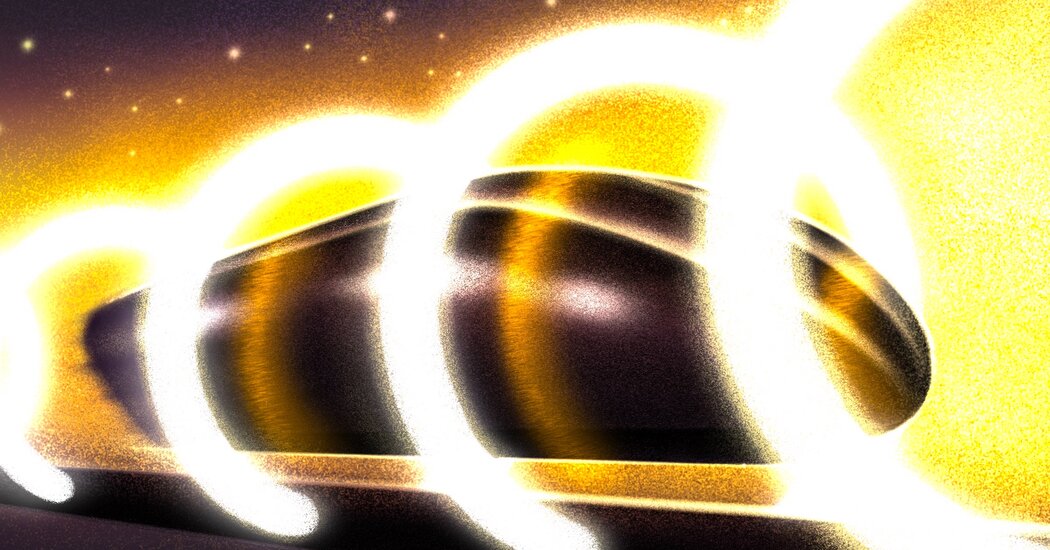 This article is part of our series on the Future of Transportation, which is exploring innovations and challenges that affect how we move about the world.

It has been a transportation dream for over 150 years: In the 1870s, a test system used a pneumatic vacuum tube to propel people under Manhattan from Warren Street to Murray Street.

By the 2010s, a new and much improved version of vacuum tube technology called hyperloop promised to transport people not a few blocks, but between cities at speeds that rival air travel, moving magnetically levitated passenger pods at over 600 miles per hour.

Yet while companies have raised hundreds of millions of dollars to design and construct hyperloop systems — with projects in India, the Netherlands, Saudi Arabia and the United States — the technology remains an aspiration.

The concept got a boost in November 2020, when Virgin Hyperloop (then known as Hyperloop One) became the first company to move people using the technology. In its hyperloop test facility outside Las Vegas, two employees traveled in a full-scale vacuum tube at 107 miles per hour on a 500-meter (about 1,640-foot) test track. Though a far cry from the promise of 600 miles per hour, the test, company executives said at the time, proved that the system could work.

“This is the first new form of mass transportation in over 100 years,” said Jay Walder, the company’s chief executive at the time. The test passengers “are real people. This test shows that we are a culture of safety.”

Yet barely a year later, the company retrenched and scaled back its ambitions. Walder departed in February 2021; Josh Giegel, his successor as chief executive and the company’s co-founder, followed last October. And in January, Virgin Hyperloop fired half its staff (more than 100 employees), stopped development of a certification center in West Virginia, put on hold development of a route in India and pivoted its focus to cargo transport. (Virgin Hyperloop did not respond to multiple requests for comment.)

The company’s downsizing and shift in focus are emblematic of the difficulties facing the hyperloop industry, transportation analysts say.

“Time and again you see technological innovations attracting a lot of investment, and you can make a lot of money during the hype cycle,” said Juan Matute, deputy director of the Institute of Transportation Studies at the University of California, Los Angeles. However, the technology doesn’t anticipate the significant technical challenges associated with creating an entirely new infrastructure. “Then interest wanes,” Mr. Matute said.

While such challenges might eventually be solved, some industry observers believe that regulatory, financial and political hurdles may doom hyperloop as a viable high-speed alternative to air travel.

The central impediment: While new types of transport such as electric vehicles can easily be integrated into the existing system of roads, a hyperloop system would require creating an entire infrastructure. That means constructing miles-long systems of tubes and stations, acquiring rights of way, adhering to government regulations and standards, and avoiding changes to the ecology along its routes.

The halt of the project was “more of a regulatory and political issue. They had a shift in priorities,” said Daniel Van Otterdijk, group chief communications officer for DP World.

TransPod, based in Toronto, had planned to build a half-scale-sized hyperloop test track in Limoges, France, by 2019, but that was delayed; construction has started, said Sebastien Gendron, the company’s chief executive and co-founder. “The plan is to make it three kilometers in length,” he said, “but it may be shorter.”

The company is also planning an aboveground system connecting the Calgary and Edmonton airports. Its first phase will be a test track running five kilometers, about three miles, from Edmonton. The company expects that to be completed by 2025, followed by a two-year certification process, allowing it to begin construction to Calgary by 2027.

The company envisions a system that will carry cargo and, eventually, people. “Not having a system for passengers would be stupid,” Mr. Gendron said. Still, he acknowledges that funding continues to be a major obstacle.

“Our biggest challenge has been access to capital,” Mr. Gendron said. The company needs $550 million for construction and $300 million to run the company. Government buy-in has also been a stumbling block. “Our world is risk-averse,” he said.

Hyperloop TT, based in Los Angeles, had as recently as 2019 promoted its work building a system in the United Arab Emirates, but has shifted to other projects, said Andrés De León, its chief executive.

Its U.S. project furthest along in development is planned for the Great Lakes region, where the company is looking for private funding to conduct a two-year environmental study before trying to build out the route.

The company also hopes to be awarded the right to plan a system between the Italian cities of Venice and Padua. If it receives the contract, it would first build an 800-million euro (about the same in U.S. dollars) test track of 10 kilometers, about six miles, over three years; but construction on that would not start until the completion of a two-year feasibility study.

“We need to advance a system that carries passengers, light freight and containers in parallel,” Mr. De León said. “We see a huge opportunity in freight, as air transport costs 10 times as much as would hyperloop.”

Indeed, a passenger-viable system would cost considerably more than a cargo-centric one. With people on board, track curves would have to be less angled to avoid discomfort and safety guarantees would need to be paramount, to ensure that sabotage or a system failure in the tube does not cause a catastrophic loss of pressure or lack of oxygen for those traveling.

“Making hyperloop work for people is a really big obstacle,” said Hugh Hunt, professor of engineering dynamics and vibration at the University of Cambridge. “Landing people on the moon cost 10 times as much as sending an unmanned spacecraft.”

Others disagree about the value of creating a freight-transport system using hyperloop technology. Virgin Hyperloop’s decision to de-emphasize development of a passenger system in lieu of a cargo one was a strategic error, said Mr. Walder, who had headed the M.T.A. in New York and Transport for London before joining the company.

“Can we create a passenger hyperloop system in 10 years? Probably not,” he said. “But it’s not that compelling to create a system for freight. The benefits are much more limited.”

Others see a hyperloop system designed solely to transport cargo as a solution in search of a problem.

“I don’t know of any case where cargo is in such a hurry,” said Carlo van de Weijer, director of smart mobility at Eindhoven University of Technology in the Netherlands. “Most cargo takes two and a half weeks to come from China. Why do you suddenly need to move it somewhere in 10 minutes? We’re perfectly satisfied with a truck that goes 50 miles per hour.”

But Virgin Hyperloop believes its switch to a cargo-first strategy makes sense, especially if it can connect shipping hubs. “Ports are heavily congested, and that will continue to get worse; we need a different system,” Mr. Van Otterdijk said. “By the end of this decade we’ll have a commercialized hyperloop system somewhere in the world.”

Even if hyperloop systems are able to charge passengers less than they would pay if they traveled by plane, Mr. Matute of U.C.L.A. doesn’t expect the airline industry to stand still. “A private jet company can price their travel lower to outcompete hyperloop,” he said.

Mr. Van de Weijer believes the “immense” infrastructure costs associated with hyperloop — including the construction of tubes, tunnels and pillars — do not justify the expense.

“Eventually we’ll have sustainable fuels for airplanes,” he added. “Saying we should build a hyperloop system is like saying because Netflix streaming uses too much energy we should invest in VCRs. We should make streaming more efficient.”

Whether hyperloop succeeds or not, though, the effort to perfect such a system may be worth attempting.

“There are so many good things about pursuing hyperloop that, even if it’s not the answer, it will have generated lots of ideas and allowed people to think things through,” said Professor Hunt of the University of Cambridge.

“Hyperloop is a very nice project for students,” he said. “You’re training very good engineers by working on this.” But, he added: “Hyperloop does not solve a significant problem that justifies it. While small test tracks might be built, there will not be a hyperloop system constructed that will transport either goods or passengers — or I’ll eat a tractor.”