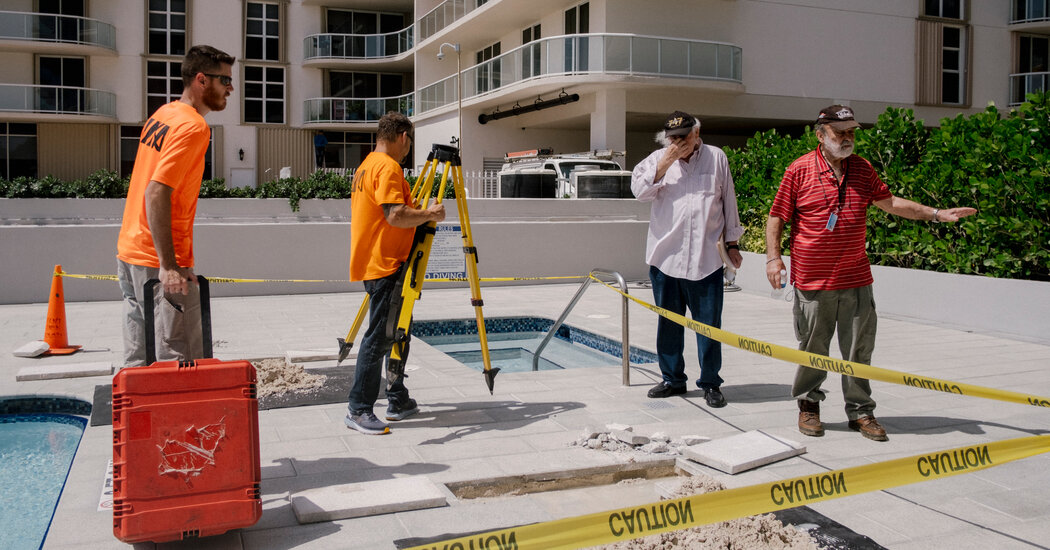 Although widely acknowledged to have been in better shape, the Champlain Towers North was engineered and designed by the same companies as the building that fell. The details are not exactly the same — it has fewer apartments and the balconies are arranged differently — but Mr. Kilsheimer says the two buildings are similar enough that he hopes to glean information hidden in the concrete and steel.

“What I’m comparing is McIntosh apples with another kind of apple. They’re still apples,” he said when asked whether the two buildings made for an apples-to-apples comparison.

“So since I don’t have the South to look at standing up, I’m looking at the North.”

An examination of everything structural — concrete, metal, chunks of slab from the ground — is the first step in what is expected to be a lengthy process to determine what caused the catastrophic collapse. He plans an exhaustive review of the drawings of both buildings to see how they compare to what he actually found.

He can give lengthy recitations about reinforcing steel (he will wince if you call it “rebar”), waterproofing, weight-bearing loads and those disturbing photographs taken by the pool just before the collapse. But he has no prevailing theories, and suspects that he will wind up settling on a mix of factors.

On Friday, his crew went to several apartments in Champlain Towers North, removing drywall and drilling for samples of concrete, called “cores.” (Or as he explained it in layman’s terms: “a little round thing with a bunch of rocks.”) He studied the multicolored specs and identified the sand and tiny pockets of entrapped air.

“This looks good,” he declared, noting that it did not come apart in his hands.

The next step will be sending the samples to labs in Minnesota and North Carolina, where they will be examined under a microscope and tested for things like chemical composition and how much weight or tension they can bear.

The strength of the reinforced steel will be tested, and so will whether rust has led to metal loss. Ground-penetrating radar will determine the thickness of the concrete. Along with the samples and strength tests, that should shed light on whether the building was constructed according to its initial drawings and the building code of the time.