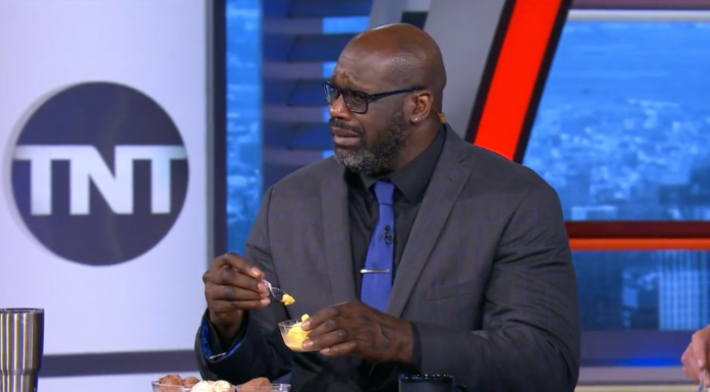 Every now and then, the fine folks behind Inside the NBA decide to do something really silly that has nothing to do with the great game of basketball, all for our entertainment. We got an example of that on Tuesday night, when Chuck, Shaq, Kenny, and Ernie got to chow down on some ice cream.

The catch: Some of the flavors were a little bit weird. Two of them were pretty normal, as the second ice cream was dark chocolate and the fourth one was chocolate peanut butter. But the first flavor that everyone tried (other than Kenny Smith, because he dove right into a separate flavor) really did not sit well with Shaquille O’Neal, as he was visibly disgusted by the Kraft mac and cheese flavored dessert.

Now, in fairness to Shaq, while I am willing to try anything once, I can see why this might not taste especially great. There was also a pizza flavored ice cream, which appeared to catch everyone off guard — Kenny thought it was cookie dough or cookies and cream, Shaq agreed on cookie dough, and Charles Barkley went with cherry vanilla. They were all extremely wrong.

Anyway, between this and Chuck saying “fool, coffee is chocolate,” which Kenny quickly swatted away as Shaq stood up from his chair and laughed, we have our latest example that Inside the NBA consistently gives us some of its best content when the focus shifts away from basketball.