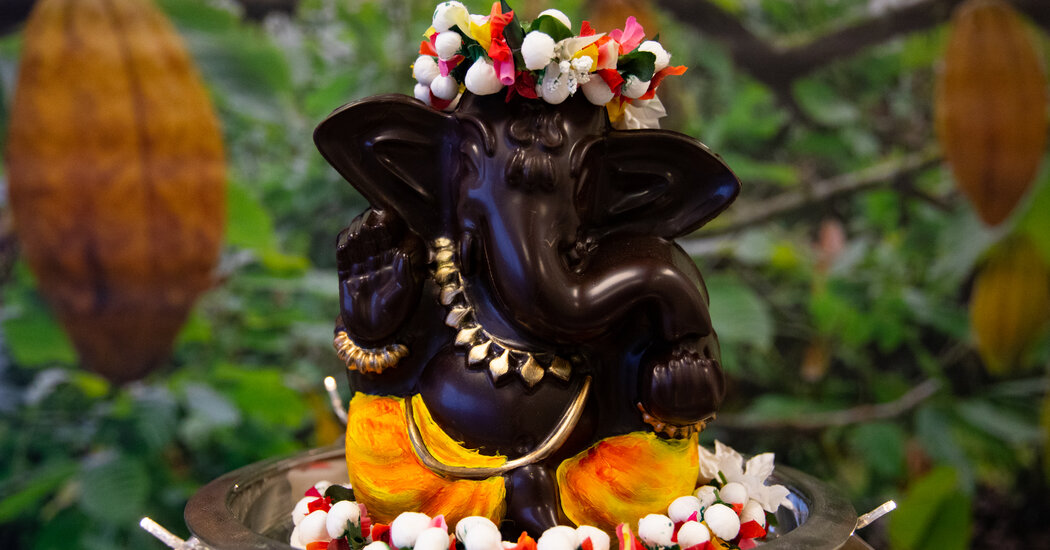 In India, few foreign confections have been more eagerly embraced than chocolate — and no brand defines this affinity more than Cadbury.

“Cadbury is in our blood,” said L. Nitin Chordia, who runs a small chocolate company, Kocoatrait, in Chennai with his wife, Poonam. “It is a completely Indian product to us.”

First imported to the country by the British during colonization, chocolate — most of it milk chocolate — is now a daily habit for one in five Indians, said a 2019 report by the market-research company Mintel. And one brand, Cadbury, accounts for two-thirds of all sales, according to 2019 data from Nielsen.

Cadbury does particularly brisk business around Diwali, the festival of lights celebrated across South Asia (Nov. 14 this year), when it has become popular to give chocolate instead of just mithai, traditional Indian sweets.

This brand loyalty endures even among members of the Indian diaspora, like Rajani Konkipudi, 47, who grew up in Visakhapatnam, in Andhra Pradesh, and now lives in the Detroit area. Her father used to bring back Cadbury fruit-and-nut bars — rich, silky-smooth and studded with raisins and almonds — from work trips to Birmingham, England, where the company was founded.

In 2005, she visited Cadbury’s factory in Birmingham to make, as she called it, the “holy pilgrimage.”

A decade later, she is one of several smaller competitors seeking to challenge the dominance of Cadbury, and of milk chocolate in general, among Indians.

Ms. Konkipudi’s business, Dwaar Chocolate, in East Township, Mich., sells small-batch chocolate that is a far cry from her corporate rival’s. Her beans come from family-run farms in Ecuador and India, and wind up in cardamom- and pistachio-speckled bars meant to mimic the taste of pistachio kulfi, or truffles inspired by paan, a crunchy, sharply flavored after-dinner snack in which she replaces betel nuts with cocoa nibs.

Her customer base is diverse, but she is focused on the Indian diaspora, hoping to inspire a greater appreciation for bitter, dark chocolate and an interest in supporting independent businesses, like hers, that oversee every step of the chocolate-making process, from bean to bar, and produce their bars in small batches, using ethical practices.

In India and abroad, more Indians are getting into the chocolate business, hoping to capitalize on the treat’s popularity. Their biggest challenge isn’t financing or distribution, but the enduring nostalgia throughout India and the diaspora for Cadbury.

After India won independence in 1948, Cadbury permanently set up shop in the country. Other European chocolate brands — Ferrero Rocher, Lindt, Godiva — would win fans in subsequent decades. But their products were seen as luxurious imports. “Chocolate was considered a rich man’s gift, a status symbol,” Ms. Konkipudi said.

Cadbury found success by doing the opposite: framing the brand as part of Indian culture and marketing its chocolates as an alternative to mithai. Today, Cadbury bars are ubiquitous, priced as low as five rupees (less than 10 cents) and available in 2.5 million stores.

Like mithai, a broad category of milk- and nut-based confections that are exchanged during any festivity — weddings, graduations and especially holidays like Diwali — Cadbury’s prime offerings are very sweet, heavy on dairy, and often include nuts and fruits. The company formalized this connection in 2003, introducing the slogan “Kuch meetha ho jaaye” (“Let’s have something sweet” in Hindi). A year later, sales had grown tenfold.

“Overnight, people understood that chocolate could be something that was for a celebration. That really unlocked the way we told stories,” said Anil Viswanathan, the senior director of chocolate marketing for Mondelez India. (Mondelez International is Cadbury’s parent company; in the United States, the Hershey Company has a licensing agreement to manufacture Cadbury’s chocolate, using a different recipe than that used overseas.)

Growing up in Ahmedabad, Gujarat, Alak Vasa, who owns Elements Truffles in Union City, N.J., used to make frequent trips to the store with her grandfather to buy Cadbury chocolate. She founded Elements in 2015 with her husband, Kushal Choksi, seeking to emphasize the health benefits of dark chocolate and make sweets free of refined sugar, as a wholesome alternative to mass-market brands.

But when Ms. Vasa, 43, hosted an early tasting for friends and family in Ahmedabad, many said her dark chocolates were too bitter. Some were also surprised that a bar cost $7 — even though that price accounted for high-quality beans and fair compensation for farmworkers.

Ms. Vasa discovered that the most successful way to woo this audience was to incorporate flavors familiar to Indians like rose and cardamom — essentially countering people’s fond memories of Cadbury with other tastes they loved.

Madhu Chocolate, started by Elliott Curelop and Harshit Gupta in 2018 in Austin, Texas, has adopted a similar strategy; its most popular offering is a masala chai dark-chocolate bar whose mild sweetness is tempered with heady ginger and clove.

“When we talk about masala chai, people are like, ‘This is how my mom makes chai,’” Mr. Gupta said.

Mr. Curelop added, “You are going up against people’s emotions at the end.”

The wide consumption of dried fruits and nuts in India — as well as the cult popularity of Cadbury’s fruit-and-nut bar — informs Zeinorin Stephen’s offerings at Hill Wild, a chocolate company she founded in 2017 with her husband, Leiyolan Vashum, in Ukhrul, Manipur. She channels those flavors by incorporating locally harvested sesame and perilla seeds, plum and wild apple in her bars.

With Diwali approaching, some of these companies are hoping to build on the momentum generated by Cadbury for giving chocolate during cultural festivities, but with a new generation of South Asians.

Last year, the Madhu partners — Mr. Curelop, 35, and Mr. Gupta, 34 — put out a Diwali box almost as an afterthought. It sold out so quickly that this year, they are producing 25 times as many boxes, featuring chocolates mixed with India-grown coconut and black pepper, and packaging adorned with a folksy, jewel-toned illustration of a peacock, India’s national bird.

Young South Asian-Americans, who make up half of Madhu’s customers, are a big market for these boxes. They don’t have as deep an attachment to Cadbury as their elders, Mr. Gupta said, and are more knowledgeable about food.

If the flavors can draw people in, Mr. Curelop added, “the onus is on us to educate people” about the ethics of chocolate making, and to explain that “everything costs a lot more because the people down the line are getting what they should be making.”

Surbhi Sahni, 45, who owns Tagmo Treats, in Yonkers, N.Y., draws a similarly young, savvy crowd for her chocolate-coated besan ladoos and kaju katli. About 40 to 50 percent of her annual sales occur during Diwali.

She believes that Cadbury chocolates will lose relevance among younger Indians. “I don’t see us going to buy Cadbury for giving gifts for Diwali,” she said. “I see us buying locally and supporting smaller companies.”

In India, Hill Wild and Kocoatrait have been joined by a growing number of independent chocolate businesses, including Soklet and Mason & Company, that offer dark chocolate and heavily tout their sustainable-farming methods.

Recognizing this rise in environmental consciousness — particularly among Generation Z, Mr. Viswanathan said — Cadbury refocused its marketing starting in 2018 to emphasize its relationship with cocoa farmers and its efforts to raise their income and train them in sustainable cocoa cultivation.

Mr. Chordia, 41, of Kocoatrait, said Cadbury’s flavors are too deeply ingrained in the Indian consciousness for any company to change those preferences completely. Even Cadbury has struggled to get customers to branch out. In 2008, it introduced a dark-chocolate bar, Bournville, whose sales, Mr. Viswanathan said, have paled in comparison to its sweeter milk-chocolate counterparts.

Mr. Chordia recalled an ill-fated attempt to give his older cousins in Mumbai a box of Kocoatrait’s dark chocolates last Diwali. “They were wondering why there is not enough sweetness in the chocolate,” he said. “If it is not sweet, you would never get any appreciation of the gift.”

“Products that are sugary and creamy, that is what will always be the majority in India,” he added. “You cannot undo the work of the last century.”