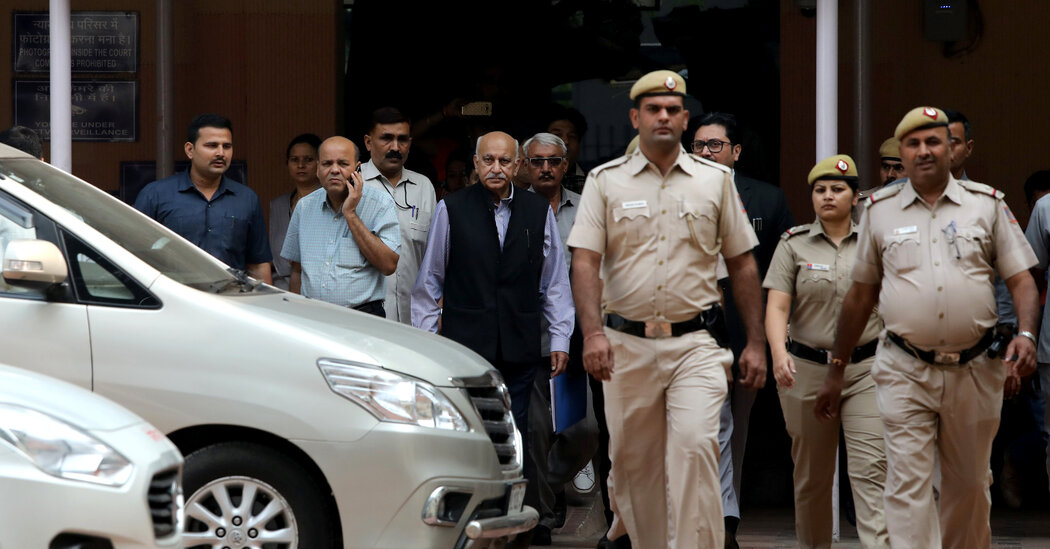 NEW DELHI — A court in New Delhi on Wednesday acquitted an Indian journalist of defamation after she accused M.J. Akbar, a prominent former government minister and newspaper editor, of sexual harassment, a dispute widely seen as a barometer of the country’s fledgling #MeToo movement.

Mr. Akbar said the allegations of the journalist, Priya Ramani, amounted to criminal defamation. But the court found that Mr. Akbar failed to prove his case, saying that Ms. Ramani’s disclosure was in the interest of preventing sexual harassment in the workplace.

The court said in its order that the “right of reputation can’t be protected at the cost of right to dignity.”

“I feel vindicated on behalf of all the women who have ever spoken up on sexual harassment in the workplace,” Ms. Ramani told reporters outside the courtroom.

She said she hoped the verdict would “discourage powerful men from filing false cases against women who share their truths.”

“Despite the fact that it was me the victim who had to stand as the accused,” Ms. Ramani said, “I’m happy that sexual harassment got the attention it deserves.”

Had Ms. Ramani been found guilty of defamation, she could have been imprisoned for up to two years, fined or both. Under Indian law, individuals can make a criminal defamation claim in the courts, though the legal standard is higher than for civil defamation cases.

Supporters of Ms. Ramani — particularly other women journalists — cheered the judgment as a significant victory for the #MeToo movement in India, which has been slow to address persistent sexual harassment in the workplace.

“A day to remember that #MeToo is not a movement but a consciousness about demanding and expecting safe workplaces, whether at home or outside,” Ghazala Wahab, a journalist who testified in Ms. Ramani’s case about her own alleged abuse by Mr. Akbar, wrote on Twitter.

Even though Ms. Ramani was acquitted, experts say the defamation suit could still have a chilling effect among women seeking to come forward to complain of harassment and violence at the hands of powerful men. Mr. Akbar, a member of the Indian Parliament, mustered a team of nearly 100 lawyers to press his defamation claim. He has the opportunity to appeal the decision.

In court, Mr. Akbar argued that if Ms. Ramani’s complaint had merit, she should have turned to the justice system rather than a “social media trial.”

The court, though, agreed with Ms. Ramani’s defense that there was no clear remedy in 1993 when the harassment is said to have occurred. At that time, sexual harassment at work was not explicitly illegal in India.

“The time has come for our society to understand the sexual abuse and sexual harassment and its implications on victims,” the court said.

The Supreme Court passed guidelines in 1997, and protections for women were further codified in 2013 when lawmakers passed the Sexual Harassment of Women at Workplace Act.

The law, known as the Posh Act, mandates that employers set up internal committees to investigate sexual harassment complaints. The committees were designed as a workaround to India’s notoriously clogged court system and meant to empower women, including those with informal jobs who rights groups say are often targeted for sexual abuse.

The committees have the power of civil courts to impose fines or order remedies. Complaints have risen in the years since the Posh Act became law, according to industry lawyers.

But it is difficult for women to win sexual harassment cases, even with this legal framework. The Posh Act requires that complaints in most instances be made within 90 days.

The court in Ms. Ramani’s case said that “the woman has a right to put her grievance at any platform of her choice and even after decades,” the court said.

“That is a great step in recognizing the fact that merely passage of time would not invalidate the claim of the woman that she suffered harassment,” Ms. Ojha said.

Still, Ms. Ramani’s case may have limited judicial impact. The same line of argument would have to be taken up in a constitutional setting, either a high court or India’s Supreme Court, to set broader legal precedent.

In 2018, the Bollywood actress Tanushree Dutta told several TV news channels that a sexual harassment complaint she had filed against a much older co-star had languished with the police for a decade — a message that helped galvanize the #MeToo movement in India. The police dropped the investigation the next year, citing a lack of evidence.

“The reason women spoke up in the public domain via social media rather than going to court is because due process doesn’t serve women enough,” said Karuna Nundy, a Supreme Court lawyer.

Over his career, Mr. Akbar, 71, has moved between politics and journalism. He served in Parliament, then founded and edited several newspapers and magazines before returning to politics.

He has been the most prominent figure in Indian public life to face accusations of sexual harassment. He is a member of the Bharatiya Janata Party, led by Prime Minister Narendra Modi, and was part of the team that helped bring Mr. Modi to power in 2014.

He resigned as minister of state for external affairs in 2018 after Ms. Ramani’s sexual harassment allegations prompted 20 other women to sign a letter making similar accusations. Mr. Akbar has denied all of the women’s allegations.

Ms. Ramani’s accusations focused on Mr. Akbar’s tenure at The Asian Age, the newspaper he started in the early 1990s.

In October 2017, she wrote an article for Vogue India in which she described an uncomfortable hotel room encounter with a senior editor during a job interview more than 20 years earlier. She described him as a legend in the news industry but did not include his name.

A year later, in October 2018, as the #MeToo movement swept Indian social media, with Bollywood stars and journalists speaking out, Ms. Ramani tweeted a link to the Vogue story. This time, she identified Mr. Akbar, then a junior foreign minister in Mr. Modi’s cabinet.

“Lots of women have worse stories about this predator,” she wrote. “Maybe they’ll share.”

Within days, other journalists came forward with allegations ranging from harassment to rape by Mr. Akbar during his tenure as a senior editor with various Indian publications. By the end of the month, 20 additional women had published their allegations. They said, in the letter and elsewhere, that Mr. Akbar had used his position as a senior editor to harass and intimidate them, mostly young women starting their careers in journalism.

Mr. Akbar resigned amid the allegations but filed a defamation suit against Ms. Ramani the following day. Ms. Ramani has since deactivated her Twitter account. Mr. Akbar has said the deactivation amounted to evidence tampering.

Mr. Akbar has not filed cases against any of the other women. He declined an interview request, referring questions to his lawyer, Sandeep Kapur. Mr. Kapur did not respond to calls and messages seeking comment.

In a court hearing in September, Ms. Ramani’s legal team said her allegations did not amount to defamation because they were true and in the public interest.

“When you fight powerful people, you only have truth on your side, so it becomes very relevant to you personally,” said her lawyer, Rebecca John. “This was probably the most important case of my career.”