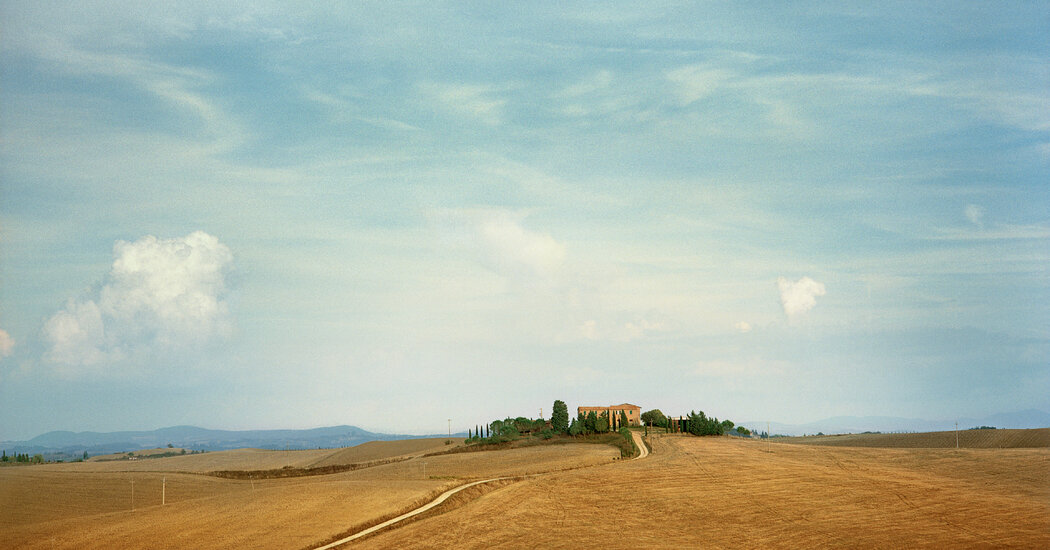 WHEN RENÉ CAOVILLA, the 82-year-old Venetian shoe designer, was first shown the Tuscan villa he bought in 1977, he fell in love with it instantly. He wasn’t only taken with the house, a 15th-century red brick monastery that had undergone a slow transformation into an austere 20-bedroom private home in the 17th century, but the Chianti landscape as well — the whole of classical history evoked in a flash. Even now, the approach to the 1,200-acre property is just as it must have been centuries ago: a long, winding ride through pale, undulating fields, leading to a dignified hilltop retreat. The three-story ivy-wrapped building is ringed by 20-foot obelisk-like cypress trees — a private citadel entered through a wrought-iron gate. Beyond the vista of olive groves, another fortresslike outcropping is visible in the distance: the mottled russet city of Siena, three miles away.

“All the great Italian painters of the 14th and 15th centuries — Leonardo, Michelangelo — were born near here,” says Caovilla’s wife of 49 years, Paola Buratto Caovilla, on a warm September day. “When you come to this area, you breathe in everything they left behind. There’s a special light.” When her husband first saw the house, she says, “It made him dream of the paintings he’d seen since he was a little boy.”

Buying a piece of Italy’s storied artistic past was, for Caovilla, a sign that he had arrived at last. His family came from modest origins in the Riviera del Brenta, an area 20 miles west of central Venice known both for its vast Renaissance-era villas and, since the beginning of the 20th century, its production of high-end footwear. His father, Edoardo, began his own company in 1934 in the hamlet of Fiesso d’Artico, making loafers and elegant pumps for the Italian bourgeoisie. In the 1950s, René took over, cultivating the emerging jet set and producing whimsical evening shoes for the designer Valentino Garavani and, later, Christian Dior’s John Galliano and Karl Lagerfeld at Chanel. In 1969, Caovilla designed what has become the label’s signature: the Cleo, a bejeweled high-heeled sandal with a strap that snakes its way up the ankle like a Roman serpent bracelet. Since 2011, René Caovilla’s son, also named Edoardo, 43, has been the company’s creative director and chief operating officer. He focused the brand on developing its own designs and visibility, cultivating relationships with stars like Rihanna and Bella Hadid.

LIKE THE COMPANY, the house, which Edoardo Caovilla visits as much as he can with his own wife and children (their primary residence is four hours north, in Milan), has also evolved with time. It was originally built for an order of monks based in Siena known as the Jesuati (not to be confused with the Jesuits), whose patron was Giovanni Colombini, a patrician businessman who renounced his wealth and spent the rest of his life ministering to the infirm. The sect, known for its strict self-mortification practices, was referred to as the “aquavitae fathers” because of the alcoholic medicinal waters they brewed and distributed to heal villagers.

The property has a private chapel, as well as fields for grazing sheep and a large pond over which herons fly in the early morning. The family believes that in the ’40s it was bought by an Italian-Russian aristocrat named Anita Stross. Over the course of World War II, she enlisted the help of the radical landscape designer Pietro Porcinai

Advertisement
, who had been a chief contributor to Domus magazine, founded by the architect Gio Ponti, and had designed the gardens of the Brion family cemetery in Treviso for the Venetian Modernist Carlo Scarpa. Porcinai made some small interventions to the interior — adding an exaggerated white stucco fireplace to the living room, for example — but mostly concentrated on the gardens. Near the house, there are discrete beds of irises, dahlias and camellias along paved paths, but as the hill descends, the vegetation disappears into the fields, a marked contrast to the Italian tradition of high-clipped, hedged mazes and topiaries. “The garden is wild,” says Paola, who has added a vegetable patch and a bed for medicinal plants like those the monks likely grew: valerian, thyme, mint. “It is not a violation.”

Inside, the family prefers to live surrounded by a well-burnished past. The antiques and furnishings have no fidelity to a particular time: In an entryway, which has floors made of local green-and-white diamond travertine laid by the monks, hangs a 17th-century tapestry by the Flemish artist David Teniers II, whose pastoral influence can be seen in the Rococo work of the French painter Antoine Watteau. Nearby sits a curvy Art Nouveau-inflected wooden rocking chair, its seat covered with mustard linen appliquéd with white fabric swirls. In a parlor, an 18th-century painting depicts the Battle of Montaperti, the 1260 clash between the Guelphs and the Ghibellines in which Siena defeated Florence, as described by Dante in his “Inferno.” In the hunting lodge, a one-room outbuilding several hundred yards from the main house (the family hunts pheasant twice a year, and keeps a kennel of trained dogs for that purpose), there are vintage campaign chairs, coffee-table books about antique pistols, wall-mounted rams’ horns and 19th-century dioramas of taxidermied pheasants.

In addition to shooting parties, the family’s social life has long revolved around the Palio, a historic horse race held in Siena since medieval times on July 2 and Aug. 16. Ten jockeys ride bareback, attired in the colors of the city’s contrade, or wards. The Caovillas have become an integral part of this local celebration, in which each of the old families in the area — the Frescobaldis, the Antinoris — throws a huge party. Their event takes place on the day of the race, with Paola decorating the tables in the colors of the winning team. As if to preserve these fleeting moments of summer, Paola converted the former monks’ cells along a lengthy hall into a series of guest bedrooms, each decorated with antique velvet banners — embroidered with animals like unicorns, eagles or owls — associated with a particular riding team. The banners, in dusky shades of umber and olive, reflect the warm and vivid landscape outside, as well as a deep sense of familial pride. That relative newcomers like the Caovillas have become part of the ancient region’s landscape and history is certainly a testament to their infectious joie de vivre, but also to their dedication in adopting Tuscan traditions into their home as well as their hearts. “Over the years, people here have become very respectful of our family,” says Edoardo, “and of what we have done.” And so, the lush emotional terroir of an age-old European aristocracy continues on in a small but meaningful way: A piece of the land belongs to you, but you also belong to it.