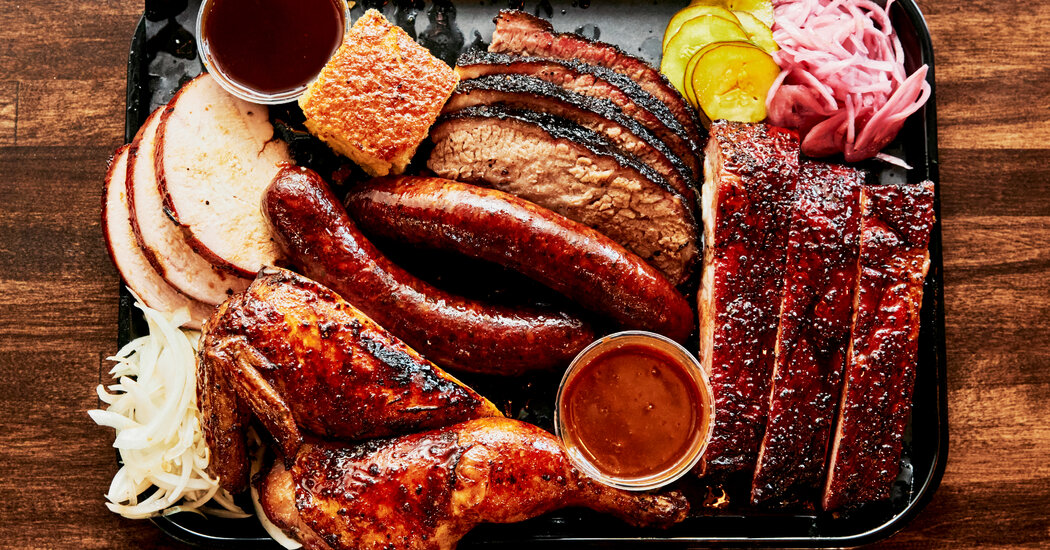 The Compton-born pitmaster Kevin Bludso, of Bludso’s Bar & Que, has never understood why pitmasters in California are often left out of the national barbecue story, which has a rich history well beyond Santa Maria-style.

“At one point, L.A had so many barbecue restaurants, stretching from Watts to Compton,” he said. “As African Americans migrated here from Texas, Mississippi, Alabama and other places, they brought their styles, changed them up, and they built legendary restaurants in L.A. through the 1970s.”

Around that time, when Mr. Bludso was about 8 years old, he used to walk down Slauson Avenue with his brother and sister to get snacks: ice cream for them, Woody’s Bar-B-Q for him. His order was a soda, a half-slab of ribs and a few pieces of soft white bread.

Most summers, Mr. Bludso went to stay with his grandmother in Corsicana, Texas, where his family came from. She smoked meats every weekend to sell at the juke joint she ran next door.

He learned the craft from her, but he worked with red oak and put a gentler smoke on the meats than his granny. And he quickly learned to cook a thicker barbecue sauce — Angelenos flat-out rejected his grandmother’s thin, almost watery gravy. This wasn’t a problem: Like the pitmasters who had established themselves here before him, he tweaked the style he had learned.

When he opened Bludso’s in Compton, in 2008, Mr. Bludso cooked ribs and rib tips, but also chickens. These were rubbed to mimic the spicy, comforting flavors of the pollos asados turned out by the street vendors who used makeshift grills all over his community, but they weren’t cooked on grills. The chickens were cooked low and slow in the pits, as his granny might have done. The chickens were kissed with red-oak smoke.