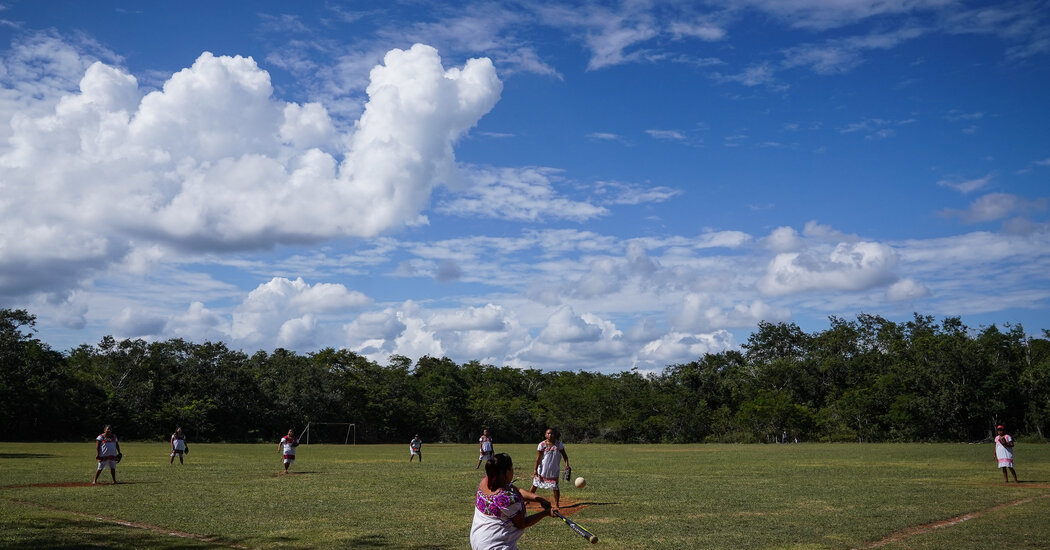 A Mayan team from a small community on the Yucatán Peninsula has caused a sensation by excelling as its athletes play barefoot and wear traditional dresses, breaking barriers with every game.

The team recently delivered a 22-2 thumping to its opponents, the Felines, for another triumph in a season that has made the Little Devils a national sensation, for not only their style of play but also who they are: a group of Indigenous women from a traditional community that once discouraged women from pursuing sports, which were seen as the province of men.

And the Little Devils now have company, the Yaxunah Amazonas, who also play shoeless and in traditional attire and have helped upend sports culture in the Yucatán.

“Here a woman serves the home and is not supposed to go out and play sports,” said Fabiola May Chulim, the team captain and manager of the Little Devils, known here as Las Diablillas, their name in Spanish. “When a woman marries, she’s supposed to do chores and attend to her husband and kids. We decided a few years ago that’s not going to impede us anymore from playing a sport when we want.”

Four years ago, women in the team’s small community, Hondzonot, began playing a modified version of baseball in the afternoons. The idea was to get some exercise after completing household chores, and it grew from there. The Diablillas had no gloves and only a homemade bat whittled from wood. They played with a tennis ball. The game followed the rules of baseball, though as in kickball, a runner would be considered thrown out if struck with the ball.

A women’s team in a nearby town also played the modified baseball game with a tennis ball and challenged the Diablillas to a match. The women of Hondzonot won, received 1,500 pesos (about $75) and uniforms, and were assigned a coach by the local municipality to teach them the rules of softball.

Though they now had jerseys, the Hondzonot women preferred to play softball as they had before — barefoot and in huipil dresses, which they make themselves and wear often in the community. This decision would become the defining feature of the Diablillas, and it helped propel them to fame.

“We wear the huipil with a lot of pride, and it is something that represents us as Mayan women,” May Chulim said. “We also aren’t accustomed to wearing shoes, and when we did we just got blisters. Why would we wear something that makes us uncomfortable?”

As the Diablillas play more games, all friendlies because there is no established softball league for them, in the Mexican states of Quintana Roo and Yucatán, their fame in the region grows. Now, just a few years after learning the rules of softball, they have played in stadiums before thousands of fans, and their faces are on a mural in the nearby resort town Playa del Carmen. Last spring President Andrés Manuel López Obrador of Mexico invited May Chulim to appear at one of his daily news conferences in Mexico City.

The team’s stardom has brought change in perceptions among men in the town. While members of the Diablillas used to request permission for something as simple as leaving the home, they now say they feel more liberated and empowered.

“As we have improved on the field, my life has improved as well,” said Alicia Canul Dzib, who plays second base and pitches for the Diablillas. “I used to really only leave the house to help my husband with our crops. Now, thanks to softball, I have permission to leave the house, enjoy myself with friends and visit new towns. It motivates me to keep playing and set an example for my daughter.”

The example set by the Diablillas has made women on the Yucatán Peninsula — and in the rest of the country — hopeful about more resources for a sport that, despite a fourth-place finish by the Mexican team at the Summer Olympics in Tokyo, has received intermittent and limited support at a national level. Though for nearly a century Mexico has had a countrywide professional baseball league that at times features Major League Baseball players, women’s softball leagues are offered only at state and municipal levels.

There is hope, however, that the popularity of the Diablillas and the Amazonas will represent a “watershed moment” for the growth of the sport in Mexico, Abel Fernández, president of the Quintana Roo state baseball association, said in a recent telephone interview.

“It’s not common for Mayan or Indigenous women to be involved in sports in their communities, and the Diablillas are breaking those stereotypes,” Fernández said, adding that Quintana Roo had recently created a state softball association. “They’ve generated a lot of attention, and now we’re seeing a boom in interest in softball and sports among women in the region.”

At a recent practice, the Amazonas, 15 players ages 15 to 64, communicated in a mix of Mayan and Spanish, roared with laughter and tossed the ball around the diamond as some of their goats bleated from the outfield, where they were tied to trees.

Like the Diablillas, the Amazonas have become increasingly sought as opponents for teams of women who wear cleats and typical uniforms. And in July, the Amazonas were invited to appear on the field of the Yucatán Leones, the professional baseball organization based in Mérida, the state capital.

The team captain, Fermina Dzid Dzul, said that since forming three years ago the team had fought to alter gender paradigms about sports participation in Yaxunah.

“When I first started playing, the men in my family said jokes and comments like ‘You’re just wasting your time playing softball,’” said Alvi Yajaira Diaz Poot, who plays several positions for the Amazonas. “Now when I come home from games they are eager to know how the game went and even bring me something to drink.”

And while the Amazonas and Diablillas know of each other and are aware of their similarities, neither is pushing for a head-to-head match to determine the best Mayan women’s softball team on the Yucatán Peninsula.

They understand their success and inclusion in the sport mean that they have already both won.