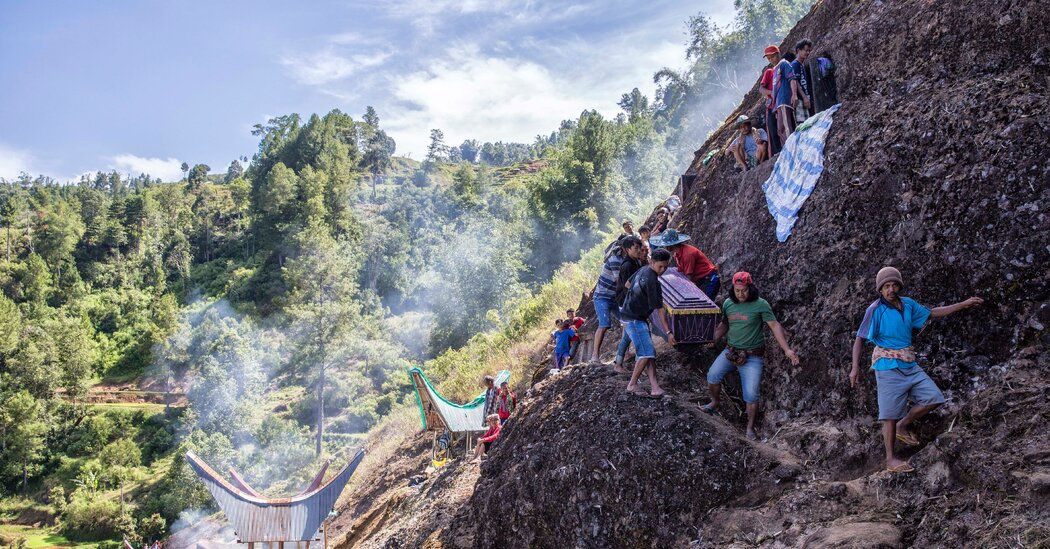 Editor’s note: This photo essay contains images of human remains that may disturb some readers.

Sobbing beside her family’s grave in the mountainous subdistrict of Rindingalo, Odiya Sulu, 38, clutched a photograph of her mother and spoke haltingly about how much she missed her. Her mother, Elis Sulu, had died in 2015 at age 65. But a year later, in 2016, when her coffin was carried outside and opened by relatives, her body was remarkably intact — the results of local preservation techniques.

Still weeping, Ms. Sulu stroked her deceased mother’s face. Her brother placed his hand gently on one shoulder. The daughter soon felt calmer — calm enough, at least, to fetch a broom and begin cleaning the grave while her mother’s body lay in the sun.

Odiya Sulu and her family are members of the Toraja people of southern Sulawesi, one of Indonesia’s largest islands. Known for their elaborate death rituals, which involve preserving and exhuming the dead and sacrificing livestock, Torajans invest vast sums of time and money on the funerals (and subsequent rites) of their loved ones.

Many families embrace the presence of tourists — and all of the families depicted in this story welcomed my taking and sharing of these photographs. (In more recent years, since the rites have gained international attention, it has become easier for outsiders to learn when and where rituals will be held. In some cases, the schedule for rituals is even uploaded on the local government’s tourism website.)

When I visited North Toraja for the first time, in August 2016, the Sulu family was performing a ritual called ma’nene’, during which the bodies of deceased family members — long after their elaborate funerals were held — are exhumed, cleaned and left in the sun to dry before being dressed in new clothes.

I was born and raised in Indonesia and have worked for nearly a decade here as a documentary and travel photographer. I’d heard about Torajan culture and had long dreamed of chronicling their unique traditions. But Rindingalo wasn’t easy to reach. From Makassar, the largest city on Sulawesi, an eight-hour bus ride carried me to the small town of Rantepao, the capital of the North Toraja district. From there, I rode a motorbike another hour and a half before arriving in Rindingalo.

I spent my first night in a village called Pangala, then decided to spend the next few days touring the nearby mountains, hoping to find a family who was performing ma’nene’ that week. On my fourth day there, I met Odiya Sulu and her relatives, who were about to begin the ritual. They warmly shared coffee, snacks and their family’s stories with me. From them, I learned about other ma’nene’ ceremonies in Rindingalo, which I also later attended.

For Torajans, death is a gradual — and social — process. The bodies of people who have recently died are kept at home and preserved by their families, sometimes for years, until the family has enough money to pay for a funeral. The spirit of the dead is believed to linger in the world before the death ceremony is held. Afterward, the soul will begin its journey to Puya, the land of the spirits.

The longer the deceased person remains at home, the more the family can save for the funeral — and the bigger and more expensive the ceremony can be. Elaborate funeral ceremonies can last for 12 days and include the sacrifices of dozens of buffalos and hundreds of pigs. Such ceremonies can cost as much as hundreds of thousands of dollars.

As a Balinese, I find certain elements of Torajan culture (and many other Indigenous traditions in Indonesia) quite similar to my own. For both the Torajan and Balinese, death does not represent an ending or a goodbye. Torajan people believe the spirit of the dead will continue protecting their families. And so, too, do Balinese. The dead never leave us. Thus, we worship them. For both peoples, this way of thinking helps when coping with grief. It has offered profound meaning — especially now, during the pandemic.

Today, Torajans are largely Christian, but their age-old funeral practices — which predate their conversion to Christianity — persist. Ma’nene’, for example, which is carried out every one, two or three years (or more, depending on the family’s agreement), is meant to be a way to honor deceased relatives. According to the belief, performing the rite will result in a better harvest in the following year.

According to local legend, the ritual of ma’nene’ is rooted in the story of a hunter named Pong Rumasek, who, hundreds of years ago, found an abandoned corpse in the Torajan jungle. Moved by the stranger’s misfortune, Rumasek took care of the dead body and dressed it up in his clothes. From then on, he was said to be endowed with good luck and bountiful harvests.

Locally, though, that origin story is often considered apocryphal.

“Nobody knows when, where and how exactly the tradition was first invented,” Endy Allorante, a photographer from Toraja who has documented Torajan death rites since 2006, told me.

Once Elis Sulu’s grave house, or patane, was clean, her relatives removed her body from its coffin and redressed it in new clothes — but not before taking pictures with the dead body.

After completing the ceremony, the family headed back to Odiya Sulu’s home to share a meal of traditional Torajan food that had been prepared earlier in the morning. The meal signaled the end of the rite.

“I’m longing for my mother so much,” Ms. Sulu said. “Seeing her body heals my heart, but after this, I have to wait for two years to see her again, on the next ma’nene’.”

The 13 days I spent in North Toraja in 2016 weren’t nearly enough to explore the Toraja people’s many traditions. So I kept returning each year — until the Covid-19 pandemic hit.

As is true everywhere in the world, the pandemic has upended many aspects of life here, including local death rituals. Some families in Rindingalo are still performing ma’nene’, despite the dangers of large familial gatherings. But others have decided to put the rites on hold.

Such a change might be seen as a dramatic, if tragic, reversal for the Toraja: For now, at least, the welfare of living family members must be prioritized over the welfare of the dead.

Putu Sayoga is a documentary and travel photographer based in Bali. You can follow his work on Instagram.