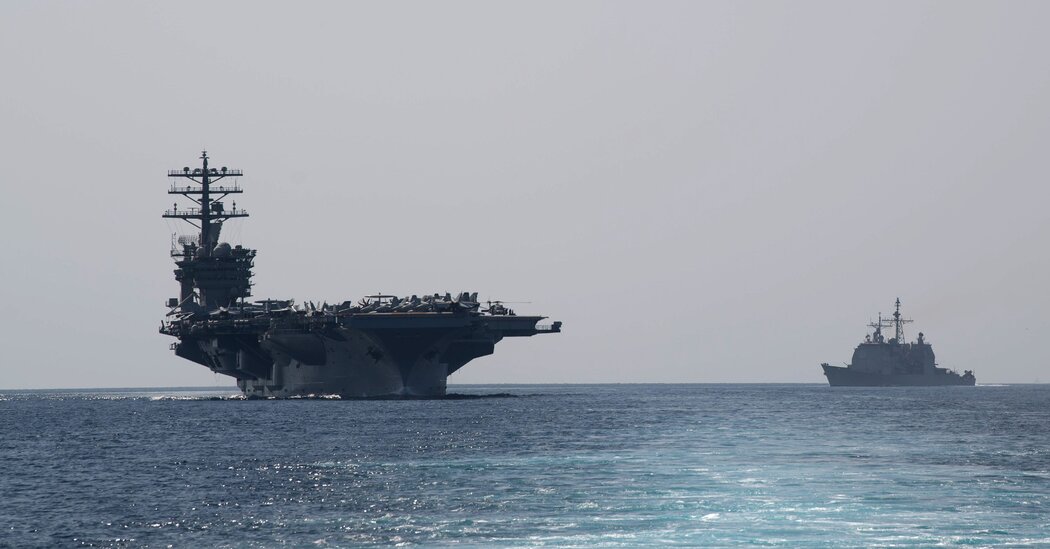 WASHINGTON — The Pentagon has abruptly sent the aircraft carrier Nimitz home from the Middle East and Africa over the objections of top military advisers, marking a reversal of a weekslong muscle-flexing strategy aimed at deterring Iran from attacking American troops and diplomats in the Persian Gulf.

Officials said on Friday that the acting defense secretary, Christopher C. Miller, had ordered the redeployment of the ship in part as a “de-escalatory” signal to Tehran to avoid stumbling into a crisis in President Trump’s waning days in office. American intelligence reports indicate that Iran and its proxies may be preparing a strike as early as this weekend to avenge the death of Maj. Gen. Qassim Suleimani, the commander of Iran’s elite Quds Force of the Islamic Revolutionary Guards Corps.

Senior Pentagon officials said that Mr. Miller assessed that dispatching the Nimitz now, before the first anniversary this Sunday of General Suleimani’s death in an American drone strike in Iraq, could remove what Iranian hard-liners see as a provocation that justifies their threats against American military targets. Some analysts said the return of the Nimitz to its home port of Bremerton, Wash., was a welcome reduction in tensions between the two countries.

“If the Nimitz is departing, that could be because the Pentagon believes that the threat could subside somewhat,” said Michael P. Mulroy, the Pentagon’s former top Middle East policy official.

But critics said the mixed messaging was another example of the inexperience and confusing decision-making at the Pentagon since Mr. Trump fired Defense Secretary Mark T. Esper and several of his top aides in November, and replaced them with Mr. Miller, a former White House counterterrorism aide, and several Trump loyalists.

“This decision sends at best a mixed signal to Iran, and reduces our range of options at precisely the wrong time,” said Matthew Spence, a former top Pentagon Middle East policy official. “It calls into serious question what the administration’s strategy is here.”

Mr. Miller’s order overruled a request from Gen. Kenneth F. McKenzie Jr., the commander of American forces in the Middle East, to extend the deployment of the Nimitz and keep its formidable wing of attack aircraft at the ready.

In recent weeks, Mr. Trump has repeatedly threatened Iran on Twitter, and in November top national security aides talked the president out of a pre-emptive strike against an Iranian nuclear site. It is unclear whether Mr. Trump was aware of Mr. Miller’s order to send the Nimitz home.

The Pentagon and General McKenzie’s Central Command had for weeks publicized several shows of force to warn Tehran of the consequences of any assault. The Nimitz and other warships arrived to provide air cover for American troops withdrawing from Iraq, Afghanistan and Somalia. The Air Force three times dispatched B-52 bombers to fly within 60 miles of the Iranian coast. And the Navy announced for the first time in nearly a decade that it had ordered a Tomahawk-missile-firing submarine into the Persian Gulf.

As recently as Wednesday, General McKenzie warned the Iranians and their Shia militia proxies in Iraq against any attacks around the anniversary of General Suleimani’s death on Jan. 3.

But on Thursday senior military advisers, including General McKenzie and Gen. Mark A. Milley, the chairman of the Joint Chiefs of Staff, were surprised by Mr. Miller’s decision on the Nimitz.

The Navy had sought to limit more extensions to the carrier’s already lengthy deployment, but commanders believed the warship would stay at least another several days to help counter what military intelligence analysts considered a growing and imminent threat.

American intelligence analysts in recent days say they have detected Iranian air defenses, maritime forces and other security units on higher alert. They have also determined that Iran has moved more short-range missiles and drones into Iraq. But senior Defense Department officials acknowledge they cannot tell if Iran or its Shia proxies in Iraq are readying to strike American troops or are preparing defensive measures in case Mr. Trump orders a pre-emptive attack against them.

“What you have here is a classic security dilemma, where maneuvers on both sides can be misread and increase risks of miscalculation,” said Brett H. McGurk, Mr. Trump’s former special envoy to the coalition to defeat the Islamic State.

Some top aides to Mr. Miller, including Ezra Cohen-Watnick, one of the White House loyalists newly installed as the Pentagon’s top intelligence policy official, raised doubts about the deterrence value of the Nimitz, especially when balanced against the morale costs of extending its tour. Some aides also questioned the imminence of any attack by Iran or its proxies, an assessment reported earlier by CNN.

Pentagon officials said they had sent additional land-based fighter and attack jets, as well as refueling planes, to Saudi Arabia and other gulf countries to offset the loss of the Nimitz’s firepower.

On Friday the top commander of Iran’s paramilitary Islamic Revolutionary Guards Corps said his country was fully prepared to respond to any American military pressure amid heightened tensions between Tehran and Washington in the waning days of Mr. Trump’s presidency.

“Today, we have no problem, concern or apprehension toward encountering any powers,” Maj. Gen. Hossein Salami said at a ceremony at Tehran University commemorating the anniversary of General Suleimani’s death.

“We will give our final words to our enemies on the battlefield,” General Salami said, without mentioning the United States directly.

Iran’s foreign minister, Javad Zarif, said on Thursday that the Trump administration was creating a pretext for war.

“Instead of fighting Covid in US, @realDonaldTrump & cohorts waste billions to fly B52s & send armadas to OUR region,” Mr. Zarif said in a tweet. “Intelligence from Iraq indicate plot to FABRICATE pretext for war. Iran doesn’t seek war but will OPENLY & DIRECTLY defend its people, security & vital interests.”

In another provocation from Iran on Friday, Tehran notified international inspectors that it was about to begin producing uranium at a significantly higher level of enrichment at Fordow, a plant that is deep under a mountain and thus harder to attack. The move seemed primarily aimed at putting pressure on President-elect Joseph R. Biden Jr. to rejoin the nuclear agreement with Iran. There was little activity permitted at the Fordow plant under the 2015 deal.

The notification to the International Atomic Energy Agency in Vienna, the United Nations group that oversees the production of nuclear material, said that Iran would resume production of uranium enriched to 20 percent purity. That is the highest level it produced before the nuclear deal, which the country justified at the time as necessary to make medical isotopes for its Tehran Research Reactor.

Fuel enriched to that level is not sufficient to produce a bomb, but it is close. It requires relatively little further enrichment to get to the 90 percent purity that is traditionally used for bomb-grade fuel.

The move was not unexpected. Iran’s Parliament passed legislation recently requiring the government to increase both the quantity of fuel it is making and the enrichment level. But the choice of doing that production at Fordow, its newest facility, was telling. The plant is built deep underneath a mountain at a well-protected Islamic Revolutionary Guards base, and successfully striking it would require repeated attacks with the largest bunker-busting bomb in the American arsenal.

It would take months for Iran to produce any significant amount of fuel at the 20 percent enrichment level, but the mere announcement could be another red flag for Mr. Trump to rekindle bombing options.