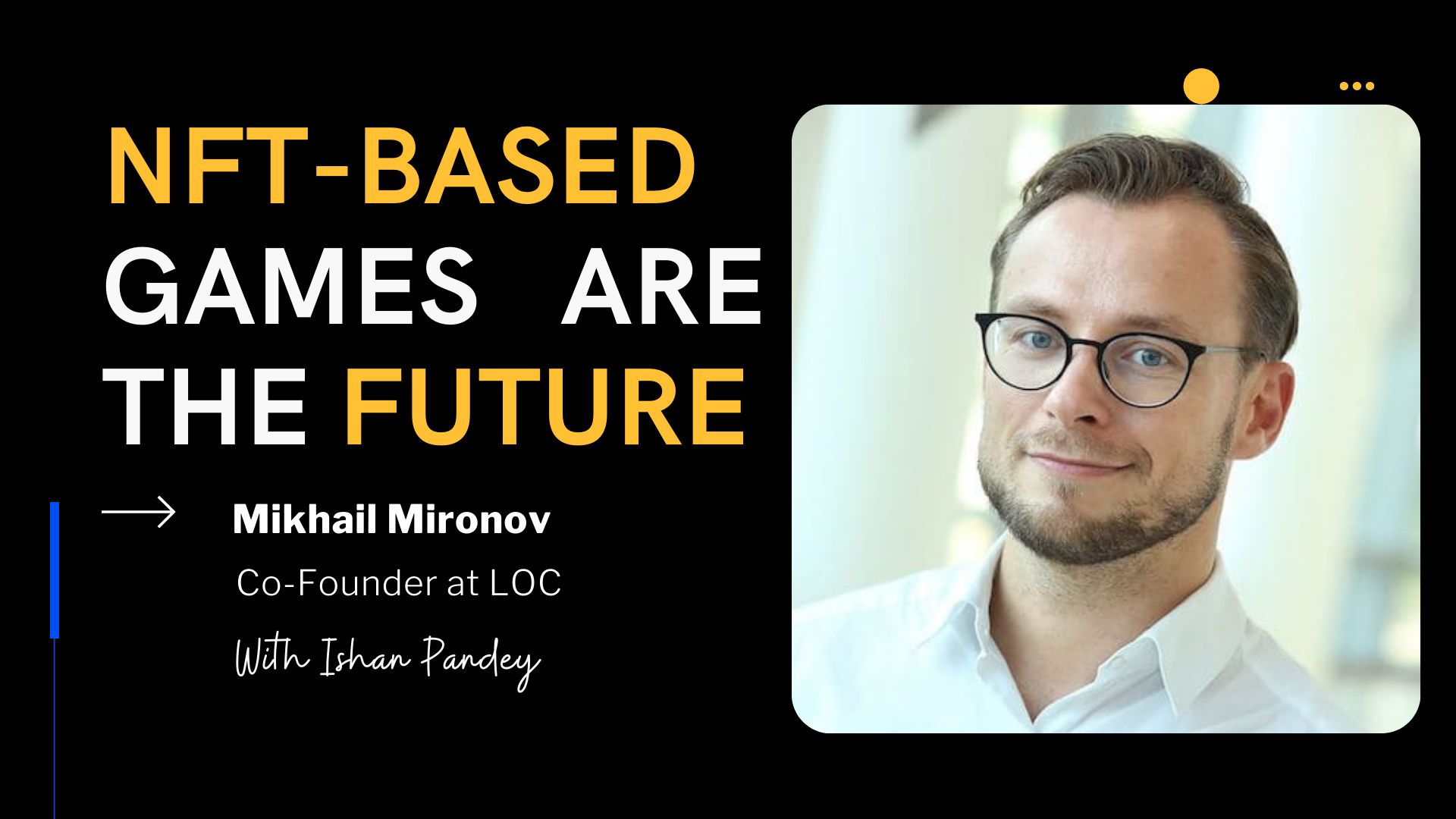 Student of law working on code and everything law.
Founder: Blockchain Research

Ishan Pandey: Hi Mikhail, welcome to our series “Behind the Startup.” Please tell us about yourself and the story behind Legends of Crypto?

Mikhail Mironov: I am a banker turned entrepreneur. An Airbnb and ABN AMRO Bank alumni. I have been in the blockchain space since 2015, professionally in the crypto industry from 2017 with ICORating. I am the founding partner of SMC Capital, a non-profit Global ICO

Transparency Alliance (GITA.foundation) and a co-founder of Cryporebel.io. Now I am heading the Rbl Labs – the new blockchain NFT gaming studio where we work around the clock on our first game – LegendsOfCrypto (LOCGame).

Ishan Pandey: Please tell us how the game economy behind NFT-game works?

Mikhail Mironov: The token and game economics for each NFT game are different and are dependent upon the game’s theme. Designing the NFT game ultimate theme and coding the game logic is critical and should be the first step while designing a game from scratch. Further, it is crucial to create a token economics model that uses NFTs to complement the game-play. For example, we have designed the LOCGame as an NFT-powered type of Top Trump Card Game on blockchain where players can collect and win valuable tokens and NFT items. The Genesis Edition is a tribute to the beloved crypto industry to the people and characters who made this crypto revolution possible. In the game design, there are many DeFi perks which create unique opportunities for the players to be a part of the game economy. Players will be able to stake NFT cards and get rewarded in tokens, 10% of all the prize pools being played with those staked cards. Gaming economy models such as these can be implemented as the NFT token mechanisms defining the underlying token economics.

NFT games are going to be complex and therefore, it is critical to communicate the use of the NFT inside the game to the gamers, so their intended use-case is utilized in-game with a constant demand attached to the game.

Ishan Pandey: NFT games aims to provide its players and collectors with educational and learning opportunities. How is an in-game incentivization model designed in an NFT-based game economy?

Mikhail Mironov: Top Trumps are both fun and educational card games. When playing and having fun, the player gets lots of information about the crypto industry, such as professions and characters that make up this industry—expanding to cities as another category, so players learn many facts about urban geography. In addition, the game has the earn-to-play element that rewards players, tournaments, and several partnerships with other crypto startups in the pipeline to provide exciting rewards to the community.

It is critical to building a vibrant community around the NFT game to ensure that the in-game NFT economy increases at a sustained pace year by year. The community creates value for in-game NFT and it is recommended that the community is allowed to contribute ideas to the team to keep growing the ecosystem.

Ishan Pandey: How do gamers use tokens for farming new rare NFT items? Further, how is the rarity of the NFTs be determined in an NFT-based game economy?

Mikhail Mironov: This is an excellent question! It is critical to establish a system that rewards users based on the amount they stake, with stakers getting more cards and decks for staking more tokens. The staking period is 60 days, with the option to withdraw after the first 30 days. As far as the rarity of the cards is concerned, we, for example, have two rarities – a visual rarity and game-play rarity. Visual rarity will be essential for the collectors as we have a scarcity element embedded into the NFT issuance system. Background colours, clothing, card frames all have a role in a visual rarity.

Ishan Pandey: How can blockchain and NFT technology improve the player experience?

Mikhail Mironov: Blockchain gaming is already not a very early stage, but nevertheless, it is still early in its adoption cycle for gaming to marry blockchain. As a technology, it provides vast benefits, with NFTs, DAOs and DeFi being the most valuable, in my opinion. For decades players were spending billions of dollars on gaming assets, with profits going solely to game producers. Blockchain allows players to become a part of the game economy where you are rewarded for playing the game. NFT items can be traded outside of the game ecosystem and can be staked or lent/borrowed with rewards. As a part of DAO design, players can actually influence essential decisions in game production, the introduction of the new rules and, for instance, in our case, to which good cause 10% of our NFT sales will be donated.

Ishan Pandey: Gaming is expected to be the first legitimate use case for blockchain, according to experts, reshaping the industry and making games more engaging than ever before. Do you think that Play-for-Play and Play-to-Earn is the future of gaming?

Mikhail Mironov: Well, I do think play-to-earn has a great benefit to gamers. However, it is not something new and though being a trendy word among the crypto folks thanks to the popularisation of it by Axie Infiniti, the future of gaming is a fair reward to players, participation in the decision-making of the game ecosystem by voting, gaming assets becoming an investment class used inside and outside of the gaming ecosystem thanks to the NFTs.

Ishan Pandey: How does DAO and governance tokens work in an NFT game?

Mikhail Mironov: DAO became a trendy word in 2021 across almost all NFT games that were fundraised this year. We do have a DAO introduction on our roadmap to make LegendsOfCrypto decentralized and help players be involved in our decision-making. However, I do know from my own experience running a DAO for two years – Global ICO Transparency Alliance or GITA.foundation, it is not an easy road. Therefore based on this experience, DAO decision-making will be introduced gradually. First, our players and token holders will get a chance to vote on the allocation of NFT sales to particular charities. Then introduce voting on new decks/packs designs and later decision-making about the game-play and game development. It is further recommended to set up a gaming council, such as how we have planned the LOCG Council that will oversee the governance of the game. To sit in the council, one will need a certain amount of tokens locked and used for voting. Such logic rules can be created to ensure that the governance model of the game works in the best interest of the overall gaming ecosystem and does not create a ‘vested interest’ based problem as that can stall the growth of a game.

Ishan Pandey: According to you, what new trends are we going to see in the NFTs market, especially in the gaming industry?

Mikhail Mironov: I am watching two major trends at the moment that will have a huge impact on gaming. The first one is able to play the same NFT assets in different games. The second one is a convergence of the NFTs with Virtual Reality. Lots of exciting things are happening.

The purpose of this article is to remove informational asymmetry existing today in our digital markets by performing due diligence by asking the right questions and equipping readers with better opinions to make informed decisions. The material does not constitute any investment, financial, or legal advice. Please do your research before investing in any digital assets or tokens, etc. The writer does not have any vested interest in the company. Ishan Pandey.