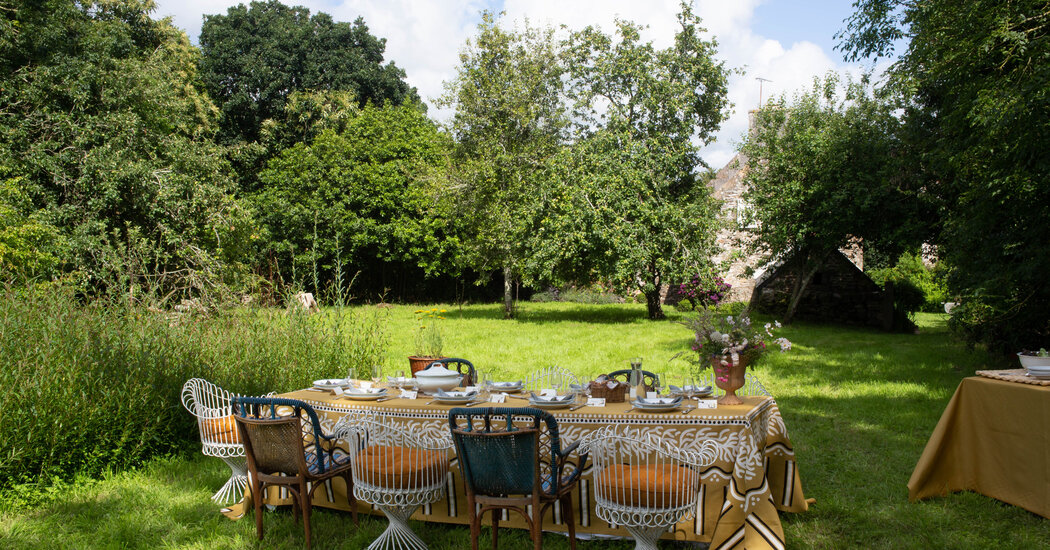 “We haven’t seen anyone properly for a year,” said Watson. “So it’s this special moment when we are able to get together for a little party.” For the occasion, he and Rauzy set up a long farmhouse table in the small willow field to the west of the house. Established with the careful guidance of the local expert Gaël Davoli, another lunch guest, the fine mahogany-hued variety of the plant, which grows to around six feet tall and is also known as petite grisette, has thrived in the region’s temperate climate. Davoli, Watson and Rauzy harvested the first crop of 2,000 seedlings by hand in February and the next is expected to come to fruition this winter. The aim is for Atelier Vime to be able to cultivate enough willow to realize its own small-scale wicker creations using it, and to begin controlling the manufacturing cycle from seed to finished product.

The studio’s new Atlantique collection — which includes rope-wrapped globular lamp bases, a pair of boldly patterned table linens with coral and woven rattan motifs by the artist Marie-Victoire de Bascher and handmade vegetable-wax candles in terra-cotta urn containers — draws from the Bretagne way of life, if not from its fields. “This is such a humble place,” said Watson, who found inspiration for the lamps in the traditional glass floats once used by local fishermen in the nearby Baie d’Audierne harbor. The same maritime mood infused the menu. Served in six courses with glasses of white Meursault and red Châteauneuf-du-Pape, the meal began with pollock carpaccio and smoked sardines prepared by Rauzy and Watson with olive oil and garden herbs, followed by fresh lobster with homemade mayonnaise, a hearty Île de Sein lobster soup and a flower-strewn garden salad. To finish, there were local farm cheeses and two desserts — a charlotte, a Chantilly and génoise confection created by the hosts and dressed with fresh raspberries and blackberries from the garden, and a noisette cake made by Fouin. The feast was cooked entirely with regional ingredients, from Homard Breton lobster to apple juice pressed from fruit collected in the property’s orchards.

“We wanted to preserve the bohemian atmosphere first created here by my parents,” said Rauzy, recalling how they had an open-door policy, hosting their circle of writer and artist friends — whose work still lines the bookshelves and adorns the walls — from the 1960s until the mid-1980s. True to this spirit, the lunch conversation centered on art and local traditions, ranging from Seiz Breur, a 1920s-era art movement that originated in the area, to techniques for preparing spider crabs, another regional delicacy that the guests enjoyed. Plans were hatched for Rauzy and Watson to create wicker beehives — they have late 19th-century examples in their archive in Provence that were made in their house there, a former wicker workshop in Vallabrègues — that will join the five wooden hives already installed and in use on the grounds.

After the last bite of the charlotte aux framboises was consumed, the friends made their way to an arrangement of antique rattan lounge chairs at the edge of the orchard, where they shared memories of the Parisian illustrator Pierre Le-Tan, who died in 2019 and whom Emmanuel Pierre knew well, over an herbal tea made with sage and verbena from the garden. And when the sun, which had miraculously shown up the moment lunch was served, retreated behind a cloud, they gathered fallen wood and built a large fire in the living room, where they continued talking long into the night. Here, Watson and Rauzy share their tips for hosting a similarly rustic but refined Breton-inspired déjeuner sur la mer.

How the Cream Cheese Shortage is Affecting NYC Bagel Shops

What to Cook This Weekend