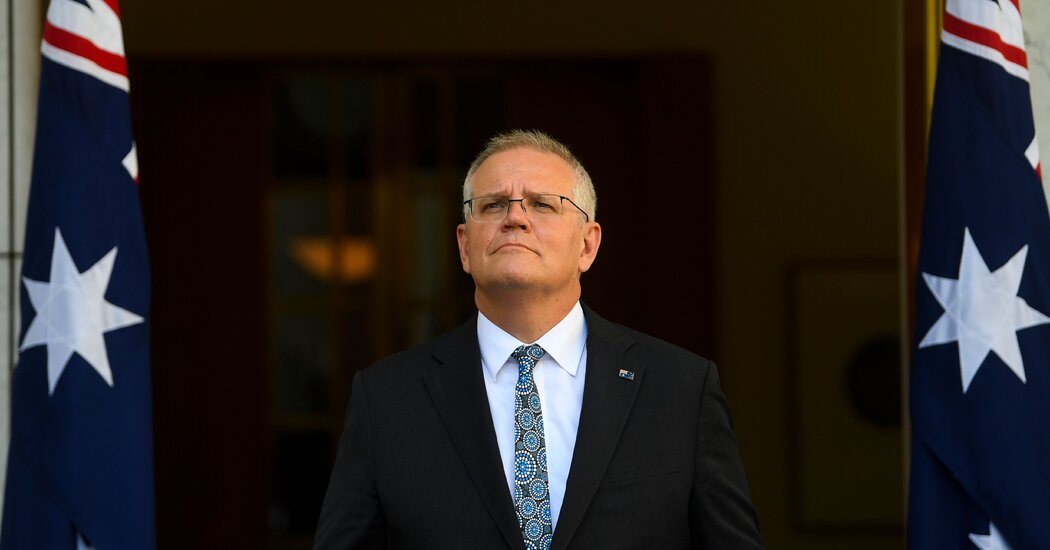 SYDNEY, Australia — Novak Djokovic received the bad news on Thursday at 7:42 a.m. His entry visa into Australia was canceled and he was being detained, despite his arrival with a medical exemption from the country’s vaccine mandate for international visitors.

“Rules are rules, especially when it comes to our borders,” Mr. Morrison wrote. “No one is above these rules.”

At first, the visa cancellation for a celebrity opponent of Covid vaccines must have looked like an obvious political winner. Australians respect mandates, from vaccinations to compulsory voting. Mr. Djokovic isn’t always a sympathetic character. And with an election on the way by May, Mr. Morrison was returning to a well-tested tactic: stirring voter support with appeals to tough border enforcement.

But now that Mr. Djokovic has been released and his visa restored — after a blistering hearing before a federal judge on Monday — Mr. Morrison’s eagerness to portray him as an arrogant violator of Australia’s egalitarian ideals has started to look like an unforced error.

A nation preoccupied in recent weeks with an economy-crippling surge of Omicron infections and a shortage of Covid tests is now debating the fairness and competence of its government and questioning the priorities of its top leader. The sudden turn has twisted Mr. Morrison’s conservative supporters in knots and angered critics who already see him as a smug opportunist who prefers performance to substance and struggles with taking responsibility.

The prime minister now faces a difficult choice: whether to double down, or to fold and let Mr. Djokovic try to win his 10th title in the Australian Open, which starts on Monday.

The law allows Australia’s immigration minister to deport Mr. Djokovic or any other visa holder for even the smallest of violations: a slight risk to public health, an incorrect statement on immigration forms or a perceived deficit of character. Alex Hawke, 44, an ambitious party loyalist who took on the immigration portfolio about a year ago, said Monday night that he was still considering whether to rescind the tennis star’s visa for a second time.

On Tuesday, immigration authorities said they were investigating whether Mr. Djokovic could be charged with a crime for apparently stating falsely on an entry form that he had not traveled internationally in the 14 days before his flight from Spain to Australia via Dubai. (Social media appeared to show him celebrating Christmas in his native Serbia.)

Mr. Djokovic had told government officials that Tennis Australia completed the form for him, but it was not clear whether that could save him.

His opponent in this case — Mr. Morrison — is a political combatant who came to power during the presidency of Donald J. Trump and relished their friendship. Letting Mr. Djokovic remain in the country would not just mean accepting legal defeat for the prime minister; it would also mean defying his own past and his political inclinations.

When Mr. Morrison served as immigration minister in 2013 and 2014, he was responsible for a military-led campaign called Operation Sovereign Borders, which took a zero-tolerance approach to any asylum seeker trying to reach Australia’s shores by boat.

Thousands were turned back or detained, even as human rights activists deplored what they called an inhumane approach to immigration. Many of those refugees are still in Australian custody in offshore detention centers. About two dozen are at the Park Hotel in Melbourne, where Mr. Djokovic was held until Monday’s hearing.

That connection was made immediately by advocates for immigrants, many of whom camped out in front of the hotel with signs reminding voters of the harsh policies Mr. Morrison favors.

Elaine Pearson, the Australia director of Human Rights Watch, said that Mr. Djokovic had accidentally shined “a much-needed spotlight on Australia’s cruel, inhumane system of mandatory detention.” She added that it had perhaps made the world and average Australians question Australia’s tendency to detain first and ask questions later.

That’s precisely the predilection that Monday’s hearing involving Mr. Djokovic confirmed. The celebrity athlete believed he had done everything he could to comply with the rules, the judge determined. It was the government officials who did not act fairly and reasonably, he said.

Mr. Djokovic had documents proving that he had obtained a medical exemption from Tennis Australia, the tournament organizers. The exemption, based on what Mr. Djokovic said was a Covid infection he had in December, had been endorsed by a doctor and an independent panel from the state of Victoria, where the Open is held.

As he was questioned for hours by border agents, Mr. Djokovic repeatedly offered to seek whatever else the government needed later that morning after he could call his agent and organizers from Tennis Australia.

The transcript of that airport interaction, shared by the court after Mr. Djokovic’s release, proved even more revealing than what the judge had paraphrased.

“We want to give you every opportunity to provide as much information as you can,” the official said.

A few hours later, after the agent left the room — presumably to talk to bosses — and returned, the tone had changed. Mr. Djokovic was advised that the process of canceling his visa had begun.

The Novak Djokovic Standoff with Australia

How it started. The standoff began when Djokovic, a vaccine skeptic, received an exemption that would allow him to defend his Australian Open title. Upon arrival, federal officials said he did not meet the requirements for entry because he was unvaccinated, and canceled his visa.

What happens next. Australian officials hinted they may make a new attempt to cancel Djokovic’s visa, even as the tennis champion, freed from detention, returned to the court. The standoff also presages headwinds he may face if he attempts to travel the world without being vaccinated.

“I just really don’t understand what is the reason you don’t allow me to enter your country,” he said. “Just I mean, I have been waiting four hours and I still fail to, to understand what’s the main reason — like — lack of what papers? Lack of what information do you need?”

Eventually, the officer agreed to let Mr. Djokovic have more time, to call his agent after 8 a.m. Then, around 7:30 a.m., the government “reneged” on that promise, as the judge, Anthony Kelly, put it.

If rules are rules, Judge Kelly concluded, the rules of procedure were not followed.

Whether that will alter voters’ views of Mr. Morrison may depend on where the “Djokovic affair” goes next.

Sean Kelly, a former Labor Party adviser and the author of a new Morrison biography, “The Game,” said the prime minister had a habit of overdramatizing the trivial and being passive with bigger challenges.

Throughout the pandemic, he’s sought to push responsibility onto the states. It’s partly what led Mr. Djokovic, a complicated figure known for outbursts and the promotion of junk science, to look more like a political victim. Mr. Morrison’s government provided mixed messages to Tennis Australia about whether vaccination exemptions were handled at the state or federal level, and Mr. Djokovic seemed to have done what he could, short of getting vaccinated, to follow along.

Mr. Kelly said it was hard to see a political benefit to dragging out the drama as what appears to be a close election looms.

“If, in the next few weeks, Australians have a sense of the pandemic running out of control,” he said, “that’s when an issue like the government choosing to make a show out of the Djokovic issue starts to play badly.”

Some of Mr. Morrison’s allies are nonetheless still calling for Djokovic to be deported, arguing that Australians have lined up for vaccines and endured quarantines, so he should too. But the prime minister is also confronting warnings from usually silent corners to stand down.

John Alexander, a member of Mr. Morrison’s center-right Liberal Party and a former professional tennis player, broke ranks Monday night and said that it was in the “national interest” to let Mr. Djokovic stay.

Watch The Trailer For ESPN’s ‘The Greatest Mixtape Ever’ Doc