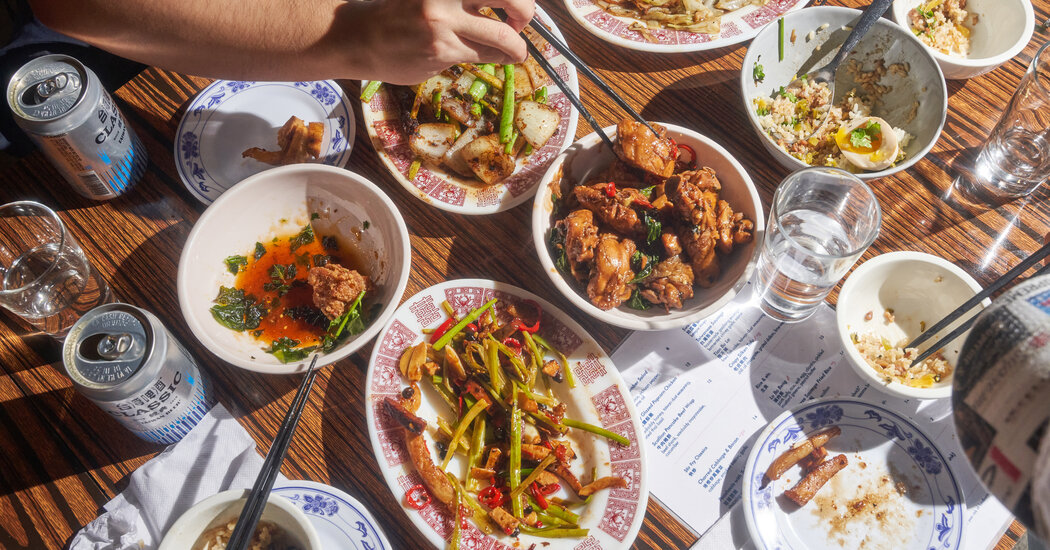 As the Covid-19 vaccines rolled out in the spring, many New Yorkers anticipated a summer filled with rampant pleasure and maskless debauchery. The overwhelming energy was: We’re off the hook, and it’s time to party.

Restaurant staffs and owners braced themselves for a rush of guest turnout, mile-long drink bills and raucous behavior. And, for a brief, shining moment, they got it. Through June and July, the kind of New Yorkers who treat restaurants as nightlife had the hot vax summer they were promised. The pent-up desire to go out, eat and drink with abandon, and stay out until all hours was sated. In that fleeting moment of apparent safety — before the Delta variant became such a threat, and masks returned — dining out was a joyful and unburdened experience.

As Bandits fully reopened for indoor dining in May — requiring guests to show vaccine cards a few weeks ahead of the citywide mandate — Mr. Stampa-Brown felt guests’ excitement mingled with some trepidation. “It was kind of lovely watching people be this new version of themselves and make mistakes like you’re at a high school prom every night.”

After that initial awkwardness, the party was on.

“With a lack of inhibition and a lack of social decorum comes a sense of wanting to be as extra as humanly possible for the sake of catching up on lost time,” Mr. Stampa-Brown said. He’d expected more of a sit-and-eat crowd through the summer, but watched as Bandits became a late-night dance spot before his eyes — the bar filling up when the disco ball turned on every night at 10 p.m.

Kevol Graham, who co-owns the Caribbean restaurant Kokomo in Williamsburg, Brooklyn, with his wife, Ria Graham, said that opening indoors and allowing bar seating created a convivial environment between strangers, an element of New York dining that was wiped out entirely by the pandemic.

“Now that people are allowed to go to the bar, there’s more socializing,” Mr. Graham said. “People are more comfortable asking other tables or asking someone at the bar, ‘Hey, what is that you’re drinking?’”

Caroline Schiff, the executive pastry chef at the Downtown Brooklyn steakhouse Gage & Tollner, also saw months of anxiety give way to excitement. “In those glorious first weeks, people would put in a note in their reservations or talk to their server like, ‘It’s our first meal out now that we’re fully vaccinated,’ and people were coming out to celebrate that,” she said.

Eric Sze, an owner of the Taiwanese restaurant 886 on St. Marks Place in Manhattan, was amazed at the energy that materialized when it reopened fully. “People were throwing parties for no reason,” he said. “‘Party for 20? What’s the occasion?’ ‘Oh, I just miss my friends.’ It was every night, every week, for a solid month and a half.”

And those parties didn’t hold back. “The first day we opened indoor dining in the spring, the very first night, a six-top sat inside and started doing coke on the table middinner,” Mr. Sze said. “We weren’t even mad. We were like, ‘Welcome back!’”

Guests’ checks were also higher than ever. “People were spending money like never before,” Mr. Sze said. The vibe was, he said, “‘I’m over-ordering food, I want everything on the menu, and a sake bomb to begin with.’”

The shift was most apparent to Ms. Schiff at Gage & Tollner’s pastry station. The $24 baked alaska for two, once described by the New York Times restaurant critic Pete Wells as a “brown blob the size of a well-fed house cat,” was an even bigger hit than their team had hoped. “I’ve never sold dessert like this before,” Ms. Schiff said. “It kind of shocked all of us. Whatever we projected for dessert sales, it almost doubled. It was insane.”

In fact, large-format desserts became a theme on menus this summer. There was a sundae for two at the Williamsburg brasserie Francie, which opened briefly before the pandemic and subsequently closed until February 2021. At the new Momofuku Ssam Bar at the South Street Seaport, guests were encouraged to share extra large bowls of bingsu. Carne Mare, also at the South Street Seaport, added a baked spumoni for two to the menu this summer. There was another baked alaska for two, at Nat’s on Bank in the West Village. And at Tokyo Record Bar in Greenwich Village, a towering sake-drenched kakigori was served for the entire table to share.

Ms. Schiff also noticed that requests for gluten-free and dairy-free dishes dropped off. “I’ve worked in a lot of restaurants where you get in a lot of allergy or dietary restriction tickets,” she said. “For pastry, that’s usually gluten-free or dairy-free. I would say that has dropped by 85 percent.”

She hadn’t counted on such a bread binge. “I sell out of Parker House rolls almost every single night here,” Ms. Schiff said. “I’ve scaled up this batch like four times now, because we sell out every night. Not too long ago, there were a lot of people in New York who would not eat bread.”

She chalked it up to the crazed, life-affirming energy that this summer brought out of New Yorkers. “Obviously there’s a percentage of the population that is allergic and gluten-intolerant, and they’re always going to eat that way, but I do think people are like, ‘I want bread.’”

Now, as the summer comes to a close and the Delta variant is still on the rise, the party is winding down. “Right when the summer began, our ticket average shot up from $25 to $40 per person,” Mr. Sze said. “Now it’s getting back to where it used to be,” he said. “I do feel like people have started reverting back to their old habits.”

Optimism still reigns, and guests are still coming to restaurants and dining indoors often, but it’s become clear that the bounce back from Covid will be a longer haul than anticipated. Mr. Stampa-Brown has noticed that prevaccine uneasiness trickling back in at Bandits. “We have people who come in, and they’re fully vaccinated, and they still stand at the bar wearing a mask,” he said.

“There’s definitely fear, there’s a possibility that something bad could happen again, and we could go into another lockdown,” he said. “And people are thinking: ‘I’m going to get it in while I can take it. There’s a chance that we could go back in time, and this time we’ve had is all for naught.’”