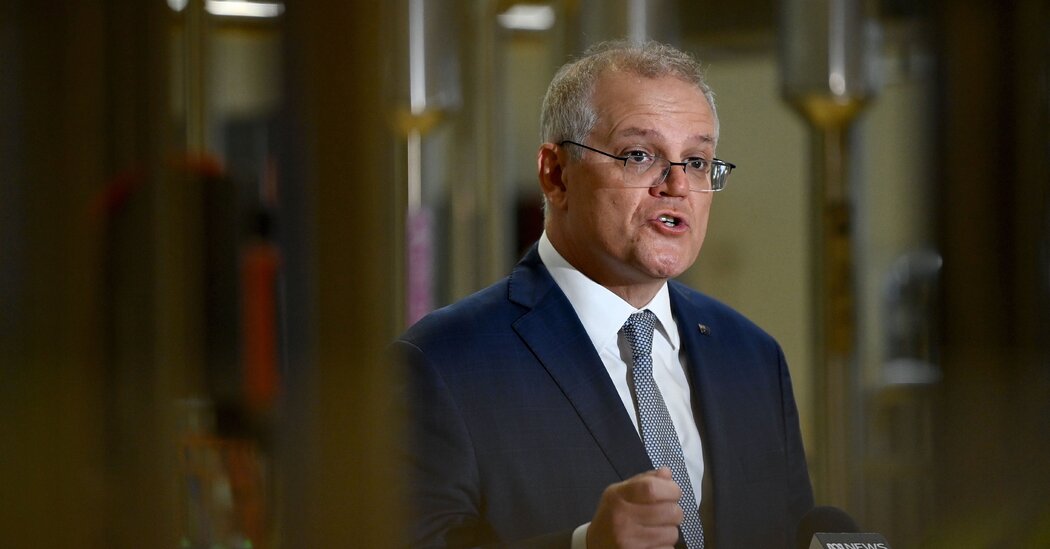 MELBOURNE, Australia — When Prime Minister Scott Morrison of Australia opened his public WeChat account in 2019, it was during the lead-up to a federal election. He said it would allow him to directly communicate with Chinese-Australians and better understand the issues that concerned them.

On Monday, reports emerged that not only had Mr. Morrison been frozen out of his account on the hugely popular Chinese messaging app since last year, but his photo had also been removed and the account was now in the control of a Chinese company under a new name.

Mr. Morrison’s posts are still present, as are his 76,000 followers. But the episode, initially reported by The Daily Telegraph in Australia, set off a furious response from members of Mr. Morrison’s conservative party, with some calling the loss of the WeChat account a hijacking.

Other conservative politicians accused the Chinese social media platform of trying to interfere with Australia’s upcoming federal election by suppressing free speech — presumably Mr. Morrison’s. The episode also stirred debate about whether lawmakers should even be using WeChat to communicate with the country’s 1.2 million residents with Chinese ancestry. A spokeswoman for Mr. Morrison declined to comment.

It all added up to another tense chapter in the fraying diplomatic ties between Australia and China.

James Paterson, a senator from the prime minister’s conservative Liberal Party and chairman of the powerful Joint Intelligence and Security Committee, said in a statement that the seizure of Mr. Morrison’s account had been an effort by the Chinese Communist Party at “interference in our democracy and silence our free speech.”

He noted that the opposition leader, Anthony Albanese, still had his WeChat account.

“We cannot allow a foreign authoritarian government to interfere in our democracy and set the terms of public debate in Australia,” Mr. Paterson said.

For his part, Mr. Albanese said the news of his rival’s WeChat problems was of “real concern,” but he stopped short of promising to boycott the platform.

There is no direct evidence that the Communist Party had a hand in the loss of Mr. Morrison’s account. Typically, when top Chinese officials run afoul of Beijing, their social media accounts disappear, with censors wiping any references to them or their posts.

WeChat is owned by the Chinese tech giant Tencent. The app, with 1.26 billion users worldwide, is popular with residents in China and members of the Chinese diaspora, who use it to chat with family and friends, read the news, make payments and more. It has been used for spreading misinformation and Chinese government propaganda, and is known to censor content. President Donald J. Trump tried to ban WeChat, along with the Chinese-owned TikTok, from operating in the United States, saying it was a national security threat. A federal judge later issued an injunction.

In a statement confirming the changes to Mr. Morrison’s account, Tencent said: “There is no evidence of any hacking or third-party intrusion. This appears to be a dispute over account ownership.”

But much remained unknown about how the transfer had occurred. For a public WeChat account to change hands, the original owner must fill out a paper form, have it notarized and upload it to WeChat, according to Tencent’s website.

China’s Cyberspace Administration, which is in charge of the country’s internet affairs, could not immediately be reached for comment.

Zhao Lijian, spokesman for China’s foreign ministry, said at a regular news conference on Monday evening that he was not aware of the specifics of Mr. Morrison’s account, but added: “The accusation of China interference is nothing but unfounded denigration and smear. We do not and have no interest in interfering in other countries.”

Mr. Paterson said that Mr. Morrison’s team began having trouble logging into the account in mid-2021. The government wrote to WeChat asking the social media platform to restore the account, but to no avail, according to Mr. Paterson. Mr. Morrison’s last post was in July 2021, when he outlined economic support for residents who had lost work because of pandemic lockdowns.

Because of WeChat’s rules that public accounts must be registered by a Chinese national, Mr. Morrison had registered his account through a Chinese intermediary.

Tencent confirmed the transfer. “The account in question was originally registered by a P.R.C. individual and was subsequently transferred to its current operator, a technology services company,” it said in its statement, using the initials for the People’s Republic of China.

Huang Aipeng, a legal representative for Fuzhou 985, said in a phone interview that the company was now, indeed, the owner of the WeChat account. But he insisted he had no idea its previous owner had been the leader of Australia.

“We didn’t know what this public account was used for,” Mr. Huang said.

This is not the first time that Mr. Morrison has clashed with the Chinese social media giant. In 2020, a WeChat post by the prime minister criticized a doctored image, posted on Twitter by the spokesman for the Chinese foreign ministry, that showed an Australian soldier holding a knife to the throat of an Afghan child. WeChat censored the prime minister’s post, saying it violated its guidelines.

More broadly, Canberra has long accused Beijing of meddling in Australia’s affairs. The relationship hit a new low in 2020, when Australia called for an investigation into the origins of the coronavirus and China imposed tariffs on Australian goods, including wine and barley. Australia has also spoken out about the crackdown on ethnic minorities in Xinjiang and joined the diplomatic boycott of the Winter Olympics in Beijing to protest China’s human rights record.

With the loss of Mr. Morrison’s account, some Australian officials vowed to dump WeChat. The Hong Kong-born parliamentarian Gladys Liu, whose electoral district includes constituents with Chinese heritage, was among them.

“In an election year especially, this sort of interference in our political processes is unacceptable, and this matter should be taken extremely seriously by all Australian politicians,” she said in a statement. “Because of these concerns, I will no longer be using my official or personal WeChat accounts to communicate until the platform explains itself.”

Alex Hawke, the immigration minister, has not used his WeChat account since 2019. But he, too, said he had “no intention to use it in the near future.”