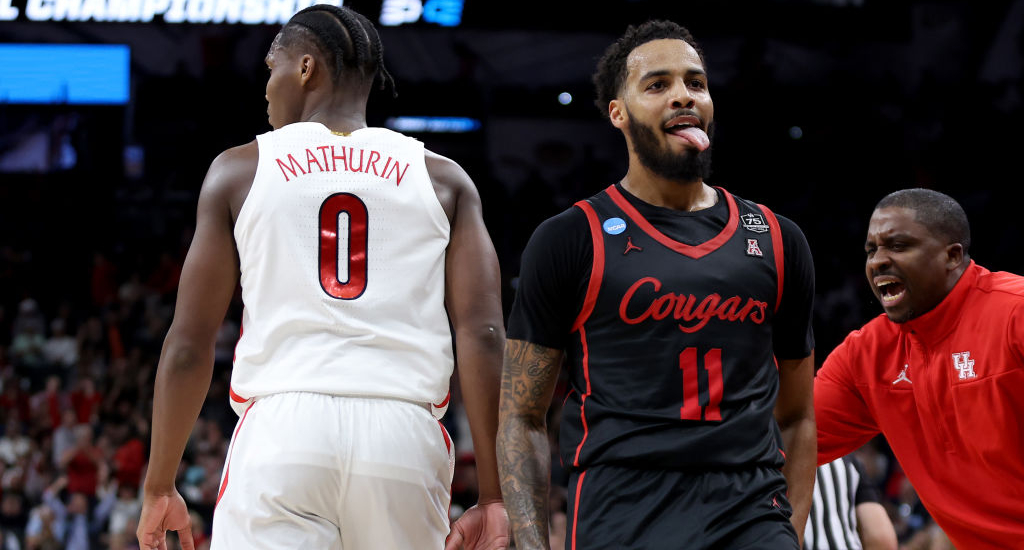 In the opening game of the Sweet 16 on Thursday evening, the No. 1 overall seed Gonzaga Bulldogs were upset by the Arkansas Razorbacks, setting the stage for a wild night in the 2022 NCAA Tournament. Mike Krzyzewski avoided retirement in leading the Duke Blue Devils to a come-from-behind win over Texas Tech but, in the finale of the evening, another No. 1 seed went down when the Arizona Wildcats were knocked off by Kelvin Sampson and the No. 5 seed Houston Cougars.

From the opening tip-off, Houston was in relative control, taking a 14-4 lead and never trailing over the course of 40 minutes.

Houston is firing on all cylinders early

While the Cougars were not a traditional No. 5 seed in that Houston entered the night at No. 2 on KenPom and with a 31-5 record, Arizona was flummoxed most of the way. The Wildcats did climb within a single possession on multiple occasions in the second half, however, and Arizona did keep things interesting for the majority of the night.

Christian Koloko throws down the alley-oop to bring @ArizonaMBB to within three!

Still, Houston stiffened on defense, holding Arizona to 33 percent shooting and forcing double-digit turnovers. The Cougars made enough big shots (including 9-of-20 from three-point range in the game) to build a double-digit lead late in the game and, while Arizona was within two possessions in the final two minutes, Houston was able to hold the line.

No easy buckets against @UHCougarMBK

Big three for @UHCougarMBK and they're up by 10!

Houston led for the ENTIRE game

In some respects, Houston was a brutal draw for Arizona in the regional semifinal, simply because of the pedigree of the Cougars. Houston made the Final Four a year ago under Sampson, and the Cougars are battle-tested and talented. Still, Houston did lose leading scorer Marcus Sasser for the season back in December, and the performance of the Cougars should not be understated against a legitimately elite Arizona team.

From here, Houston will face the No. 2 seed Villanova Wildcats on Saturday with a chance to reach the Final Four for the second straight season. There is nothing assured about that contest but, in a wild twist, Houston is likely to enter the Elite Eight matchup as the betting favorite against the higher seed, and the Cougars earned a great deal of respect with a wire-to-wire upset on Thursday.