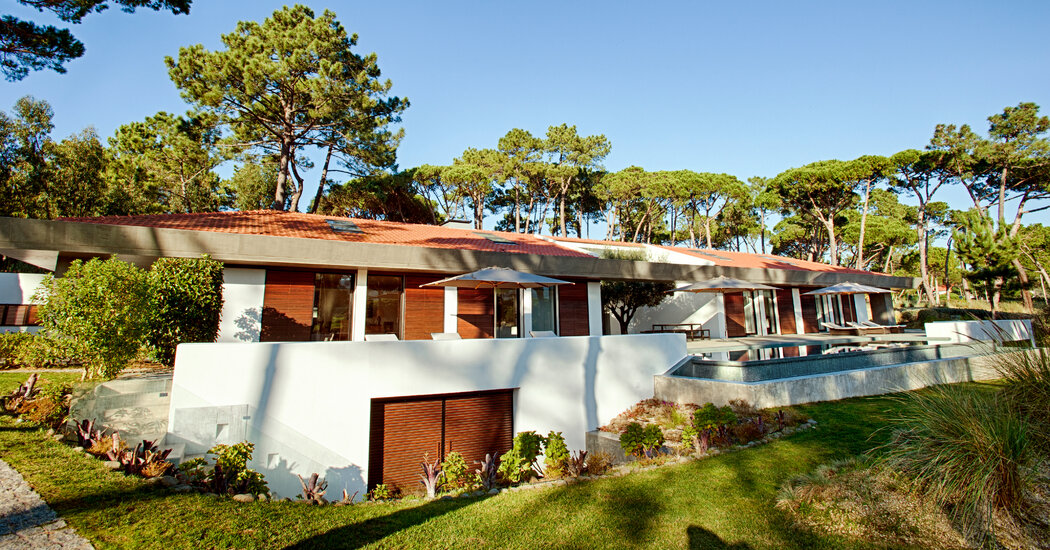 This contemporary villa sits on nearly three acres in the tourist-friendly town of Sintra, about three miles from Portugal’s southwestern coastline and about 25 miles west of Lisbon. Built in 2008 from concrete and glass, the approximately 10,700-square-foot house has five bedrooms and five and a half baths, with natural light pouring in through floor-to-ceiling windows and doors throughout.

The low-slung villa all but disappears into its surroundings, with three stories anchored by a central courtyard with a lone, grand olive tree. From the driveway, the front door leads to an entrance hall with a half bath. Just beyond is the courtyard, visible through glass walls. To the right is the open living room, with warm-hued Brazilian oak floors, a courtyard view and doors that open to the expansive terraces, a swimming pool and gardens. The adjacent dining room opens to a covered terrace and barbecue area that connects to the pool deck. The galley kitchen has a casual dining area and garden access.

To the left of the entrance are four bedrooms, each with sliding doors that open to the pool area. Three bedrooms share two bathrooms, while the bathroom in the primary suite has a rain shower, a large soaking tub and a glass wall with garden views.

A mezzanine has lounging and entertaining spaces including a TV room, sitting areas and office space. The basement is equipped for a versatile fitness and wellness regime, with a gym, game room, heated indoor swimming pool, Jacuzzi and sauna. Outside, the 40-foot pool is flanked on one side by a long terrace with lounge and dining furniture, and on the other by a lawn and landscaped garden.

The villa also has central heating and air-conditioning, a staff bedroom and bathroom, and a four-car garage. It is situated in Colares, a village in the town of Sintra, a UNESCO World Heritage Site known for its 18th-century architecture, wineries and resorts at the foot of the Sintra Mountains. Lisbon, Portugal’s capital and largest city, is a 40-minute drive east.

“It’s a very unique place,” said Rafael Ascenso, the general manager of Porta da Frente Christie’s, which has this listing. “It’s a paradise for the ones who like nature and like the rough beaches for windsurf, surf. It’s a paradise for cycling.”

Before the pandemic year of 2020, Portugal had seen house prices rise steadily for nearly a decade, thanks in part to the country’s Golden Visa program, which allows real estate investors to acquire residency and citizenship, and to its nonhabitual resident program, which offers tax benefits to certain nonresidents. That growth slowed as travel restrictions and border closures dampened demand, but foreign buyers seeking to take advantage of the visa program kept the market active, agents and market experts said.

The median appraised value of homes across Portugal settled at 1,144 euros a square meter ($126 a square foot) in November 2020, according to data from the National Institute of Statistics. That marked a year-over-year increase of 6.3 percent — notably down from the previous year’s growth of 11.1 percent.

But in keeping with the growing market and seller confidence, asking prices have been considerably higher. Idealista, the Madrid-based property search portal, reported the average asking price for a home in Portugal in March 2021 to be 2,181 euros a square meter ($241 a square foot) — up from $129 a square foot five years ago.

Foreign buyers eyeing Lisbon should note that Portugal’s government recently announced that investments in that city, as well as other high-density areas like Porto and the Algarve, will be excluded from the Golden Visa program beginning in 2022.

During 2020, “many investment buyers purchased apartments off-plan as rental investments or to ensure they secure the golden visa” before it expires, said Oliver Banks, a senior negotiator with Knight Frank.

Meanwhile, he added, domestic buyer activity “has increased as people reconsider their environments.”

Mr. Ascenso, of Christie’s, said the pandemic “affected our business, but we sold a lot of properties at a distance. Last week we sold a 4 million euro property with a video conference. So it’s incredible how the market can adjust to these kinds of difficulties.”

He is “optimistic” that when border restrictions cease, buyers will act on properties they were eying from afar.

In the downtown area, homes in the priciest areas — specifically the neighborhoods of Baixa and Chiado — sell for an average of 6,575 euros a square meter ($727 a square foot), said Patricia Casaburi, the CEO of Global Citizen Solutions, an investment migration consulting firm. “Prices are rising fast. Rent prices in this area are also very high, making it an ideal location for investment,” she said.

She also pointed to two “up-and-coming” districts, Marvila and Beato, onetime industrial areas that now have “a number of creative spaces and industries, as well as microbreweries, and can be a good choice when it comes to investing in property in Lisbon.”

Mr. Banks noted that new developments in the pipeline will also favor buyers. Lisbon is seeing smaller, boutique developments of 10 to 20 homes, he said, with developers “having to work hard to ensure their development stands out.” The result is higher quality construction and finishes, and more amenities.

At the higher end, Mr. Ascenso characterized the market as “steady,” after five years of rising prices and demand, with Lisbon’s suburbs (particularly Sintra, Estoril and Cascais) in greater demand than the city center, “because people are looking now for more space, more outside area.”

Who Buys Around Lisbon

Mr. Banks said that 40 percent of the Lisbon market is made up of international buyers, “typically from Brazil, Britain, Ireland and France.”

Last year, there was a sharp increase in buyers from the U.S. “As other European countries experienced harsher lockdowns or more insecurity, economic or physical (or both, e.g. France, or Britain with Brexit’s economic uncertainty), those living in the U.S. (not necessarily Americans) who were looking to move back to Europe chose Portugal instead of their home countries,” he said.

Mr. Ascenso also noted a spike in American buyers. “It was something that had never happened before. This is new for us,” he said. “This demand is increasing every month.”

Property ownership by foreigners is not restricted in Portugal, said João G. Gil Figueira, a partner with the Lisbon-based law firm GFDL Advogados.

“Legal fees, notary and registration fees for a typical residential property transaction are in the 1 to 2 percent range,” he said. Buyers also pay a stamp duty of 0.8 percent of the purchase price and a property transfer tax, which varies depending on whether the property is a first or second home.

Foreigners, especially those making their first purchase in Portugal, should hire a lawyer to craft the contracts and negotiate terms and conditions, he said, “but particularly for the due diligence on the property.” Older homes require permits before they can be restored or altered, he added.

Mr. Banks said properties are sold in euros. “This is important,” he said, “as currency plays a big part in investment for international purchasers.”

Ms. Casaburi said local banks prefer income rather than assets when considering a loan, and often ask for a 30 to 40 percent down payment from nonresidents.