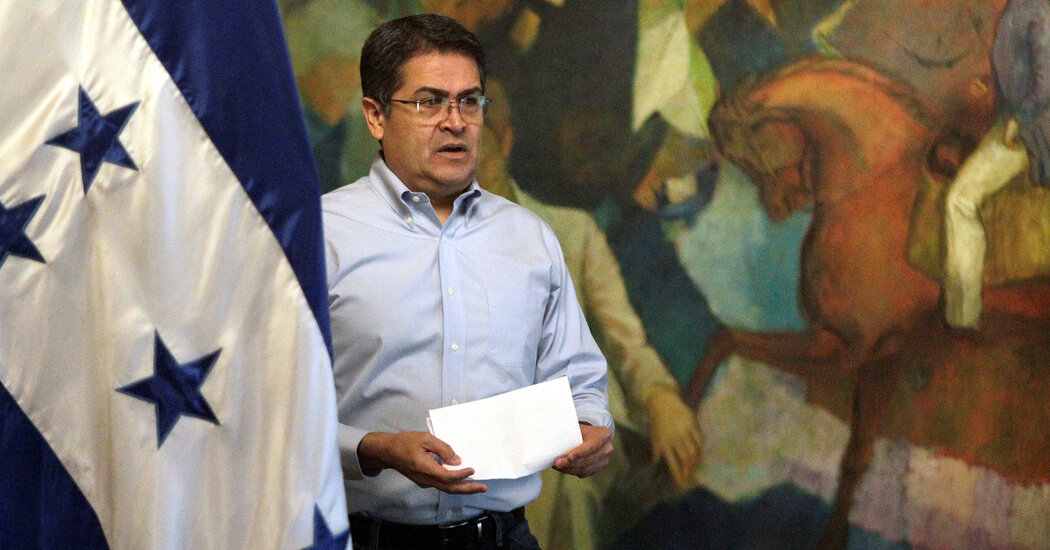 He received briefcases stuffed with cash. He held clandestine meetings with drug traffickers in a rice factory. He sought to invest in a cocaine lab. He vowed to flood the United States with drugs. And he did all of this while pursuing the highest office in Honduras.

These were some of the accusations made about President Juan Orlando Hernández of Honduras in a federal courtroom in New York this month.

Mr. Hernández, who has repeatedly denied any association with drug traffickers, was not standing trial in the case and has not been charged with any crimes. Rather, Geovanny Fuentes Ramírez, a Honduran citizen, was the defendant; he was convicted on Monday on all counts, including conspiracy to traffic cocaine and arms possession.

But evidence presented in court over two weeks provided a searing assessment of the president, whose government’s failure to build a lawful state and a robust economy has helped drive hundreds of thousands of despairing citizens to emigrate in recent years, with most trying to reach the United States.

The trial added to the growing mound of evidence gathered by federal prosecutors in recent years that casts Mr. Hernández as a key player in Honduras’ drug-trafficking industry. The proceedings led analysts to believe that formal charges against Mr. Hernández himself may not be far away.

“It’s yet another nail in his coffin,” said Eric L. Olson, director of policy at the Seattle International Foundation and an expert on Latin America. “But more than what this means for Juan Orlando, this sends another message to the people of Honduras that there’s no future for them, and what’s the point of hanging around?”

The swirl of corruption allegations around Mr. Hernández has been building for years.

In 2017, international observers documented many irregularities in his election to a second term, prompting weeks of violent protests around the country. The opposition said he should not have been on the ballot in the first place, arguing that Mr. Hernández had unfairly stacked the Supreme Court with his supporters, who then lifted the nation’s constitutional ban on re-election.

More recently, federal prosecutors in the United States have sought to show that the president built a symbiotic relationship with drug traffickers who provided financial support for his political ascent in return for protection from prosecution.

In 2019, Mr. Hernández featured as an unnamed but plainly identifiable “co-conspirator” in the prosecution of his brother, Tony Hernández, who was convicted in federal court in New York on drug trafficking charges and is scheduled to be sentenced next week.

The accusations made by American government lawyers over the years have made for a jarring contrast with the United States’ continued political support for Mr. Hernández, who has cast himself as a willing partner in the effort to stem the flow of migrants to the U.S.-Mexico border.

In testimony during the trial this month, Devis Leonel Rivera Maradiaga, who once ran a violent drug gang called Los Cachiros, testified that in 2012 he gave $250,000 in cash to Mr. Hernández — transferring it by way of the president’s sister, Hilda Hernández — in exchange for the promise that he would not be arrested and extradited to the United States. Mr. Hernández, at the time, was running for his party’s presidential nomination.

Another witness, a Honduran accountant who testified under the pseudonym José Sánchez, said he witnessed Mr. Hernández accepting bribes from Mr. Fuentes and negotiating access to the drug trafficker’s cocaine lab during meetings at the offices of Graneros Nacionales, the biggest rice producer in Honduras.

“I couldn’t believe what I was watching,” Mr. Sánchez said of an encounter in 2013, when Mr. Hernández was running for president on his party’s ticket. “I was looking at the presidential candidate meeting with a drug trafficker.”

Mr. Sánchez said that in those meetings, Mr. Hernández was twice given bribes of cash stuffed into briefcases, one with $15,000 and the other with $10,000. The accountant said he was personally responsible for counting the cash: $20 bills wrapped in rubber bands.

Mr. Sánchez, who fled the country and is seeking asylum in the United States, also said he heard Mr. Hernández assure Mr. Fuentes that he planned to cancel the extradition treaty with the U.S., making his associates “untouchable.”

“He then took a sip of his drink,” Mr. Sánchez said of Mr. Hernández. “And he said, ‘We are going to stuff the drugs up the gringos’ noses, and they’re never even going to know it.’”

A prosecutor said during closing statements that the relationship between Mr. Fuentes and Mr. Hernández was so important to both men that Mr. Fuentes continued bribing the president in exchange for protection as late as 2019.

The evidence presented at trial, and the “readiness” of prosecutors “to explicitly allude to his culpability, suggests that Hernández is very much in the government’s sights,” said Daniel Richman, a professor at Columbia Law School.

Mr. Hernández has denied the allegations of corruption and has argued that the testimony in the Fuentes case, as in the trial of his brother, came from unreliable witnesses who were trying to punish him for his efforts to clean Honduras of drug trafficking. Moments after the jury returned its verdict on Monday, he took to Twitter to defend himself, citing what he called an “unprecedented 95 percent reduction” in drug trafficking across Honduras.

The trial played out in Honduras against the backdrop of presidential and congressional campaigns that have further underscored the degree to which corruption riddles the political system.

Several candidates who competed in primaries on March 14 were under investigation for or suspected of corruption. And though the votes are still being tallied, the front-runner to be the nominee for the Liberal Party, one of Honduras’ two main political parties, was released from a U.S. prison last August after serving three years for a money laundering conviction.

But corruption is so embedded in society, and Mr. Hernández so widely despised by Hondurans, that the latest allegations against him will most likely have little impact, analysts said.

“One would think he’d be crippled by these allegations, but there have been so many shadows over the legitimacy of his presidency and he’s still been able to hold the office,” said Charles Call, an associate professor of peace and conflict resolution at American University in Washington.

Following the verdict this week, Hondurans expressed a sense of fatigue, and widespread cynicism that anything would change.

“We do not live in a state of law,” said Edwin Kelly, 35, a data analyst from La Ceiba who lamented “the power of the narco-president.”

The latest revelations might, though, drive even more migrants to head north.

There are many reasons more Honduras have been leaving in recent years, among them insecurity and poverty, said Mr. Olson, of the Seattle International Foundation.

“But there’s a meta-story, which is the failure of government,” he said “We need to give the people of Central America a sense of hope. And that starts with fighting corruption and ending this ridiculous theft of Hondurans’ future.”