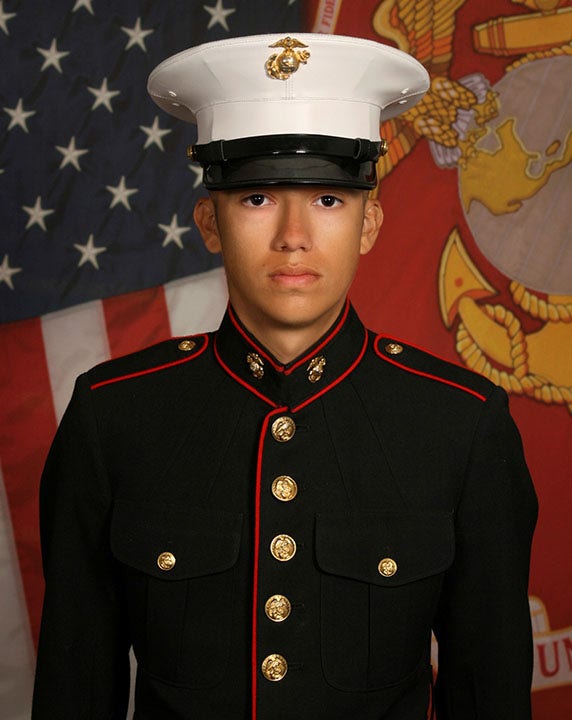 INDIO, Calif. – This article is part of a Fox News Digital series examining the consequences of the U.S. military withdrawal from Afghanistan one year ago this week.

“Hunter jumps into the pit,” the Marine’s mother, Alicia Lopez, told Fox News. “Just thousands of bodies pushing to get past this gate.”

Cpl. Hunter Lopez was one of the thirteen U.S. service members killed in a the suicide bombing at the Kabul airport on Aug. 26, 2021.
(U.S. Marines/Handout via REUTERS)

Hunter grabbed one girl, brought her to safety, then returned and retrieved the second. The Marine’s friend told Alicia he saw Hunter head back toward the wall after that.

“He said that was the last time he saw him,” Alicia told Fox News, her voice cracking as she spoke.

Hunter, 22, was among the 13 U.S. service members killed in the Aug. 26, 2021, suicide bombing at Hamid Karzai International Airport during the withdrawal from Afghanistan. The blast also killed at least 170 Afghan civilians and injured more than 150 others.

Hunter was born into a family with a rich tradition of military and community service – a tradition that heavily influenced his upbringing.

“Hunter as a teenager was very mature for his age,” his father, Herman Lopez, told Fox News. “He had a plan, and he had a direction of where he wanted to go in the next few years.”

“I like to describe him as the all-American kid,” Herman said. “He always seemed to be a leader.”

Hunter grew up mature for his age and had a clear direction of where he wanted to go in life, his father, Herman Lopez, says.
(Courtesy of Herman and Alicia Lopez)

Alicia added: “Just a very old soul is what we would say.”

Hunter enlisted in the Marines in 2017, just three months after his high school graduation. He served on the Marine Corps Fleet Antiterrorism Security Team, an elite part of the Corps Security Forces Regiment that’s on standby to respond to threats to the Navy, the Marine Corps and other U.S. interests.

His parents said Hunter was obsessed with physical conditioning, training and preparedness – and Star Wars.

“He would read the books, knew all the characters, knew planets and knew quotes from the movies,” Herman told Fox News. “It was just a passion that he had.”

“Whether it was the movies or his training or his physical conditioning, whatever he did, he always just wanted to be the best at it,” he continued. “He just needed to always be preparing himself and always being ready.”

Alicia added: “He would say he didn’t want to be the reason why somebody didn’t come home.”

Hunter was on deployment in Jordan when he was ordered to Afghanistan. He’d been there for several months and was set to return to the U.S. in August or September.

Hunter was excited for the chance to help his fellow Marines with the Afghanistan evacuation, his family says.
(Riverside County Sheriff’s Office)

“That was going to be his last deployment,” Herman said.

Military friends in Afghanistan told Hunter about the chaotic conditions in Kabul. First-hand accounts have repeatedly emphasized how U.S. service members worked around the clock as they sought to maintain order at the airport.

“That frustrated him that he couldn’t go over there and help them,” Herman said. “He wanted to help out with the mission, of course, but he also wants to be there for his friends and his buddies.”

Hunter went right to work when he arrived in Kabul and couldn’t speak to his family for several days. When he did, he detailed the scene.

“He described the conditions they were facing … trying to deal with the incredible amounts of people that were trying to get into the airport,” Herman told Fox News.

Alicia said Hunter’s brave actions “makes me proud to be his mom.”

“We’re proud of him and the job he did,” she told Fox News. “Now it’s our turn to continue on with his mission helping others.”

Michael Lee and Andrew Murray contributed to this report.

Matt Leach is a Fox Digital Originals reporter based in Tampa, FL.