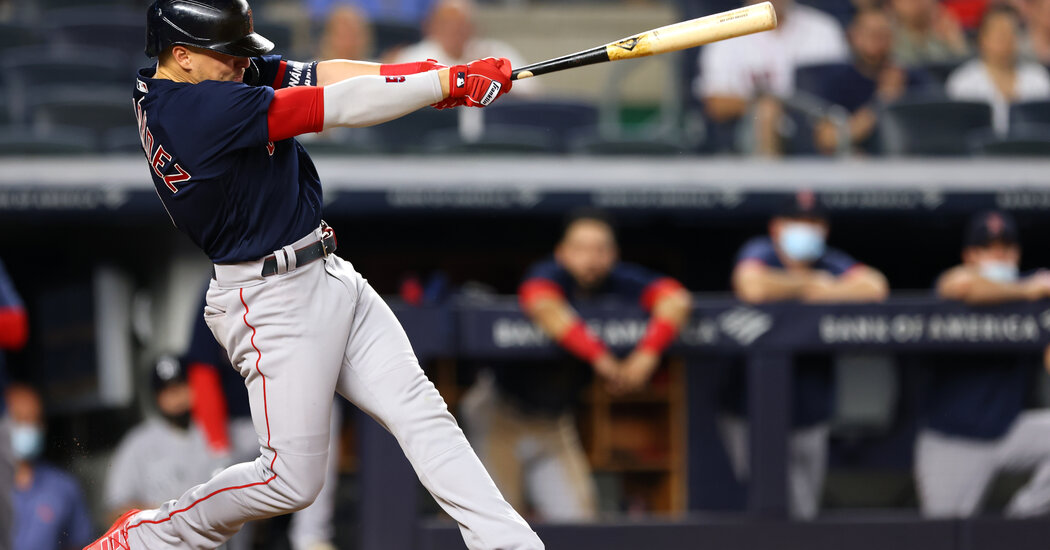 Kiké Hernandez snapped an 0-for-27 skid with a tiebreaking double in the eighth inning and the Boston Red Sox completed their major league-best 20th come-from-behind victory, beating the Yankees, 7-3, Saturday night.

Hernandez got his first R.B.I. since May 20 by roping a two-out fastball from Chad Green (0-4) to the wall in left, scoring Rafael Devers from first.

Christian Vazquez scored Hernandez a batter later with a grounder that skipped over the first-base bag, and Bobby Dalbec followed with a two-run homer estimated at 453 feet.

The Yankees dropped behind Toronto into fourth place in the A.L. East. They are 3-9 in their past 12 games, averaging just 2.4 runs. Clint Frazier hit into the team’s league-leading 55th double play in the seventh inning.

Former Yankees minor leaguer Garrett Whitlock (1-1) faced the Yankees for the first time after Boston selected him in last year’s winter meeting draft. He allowed an inherited runner to score in the sixth but wasn’t charged with a run over one and two-thirds innings. He was credited with his first major league win.

Another former Yankee, Adam Ottavino, pitched a perfect eighth in his return to the Bronx. Left fielder Alex Verdugo made a diving catch in the ninth before Brandon Workman walked two with two outs, prompting Cora to call on closer Matt Barnes.

Barnes struck out Kyle Higashioka for his 14th save.

Boston rallied without slugger J.D. Martinez, who was scratched from the lineup a night after jamming his left wrist into a base while sliding. Manager Alex Cora said Martinez is day to day.

After going 9-1 against Boston in 2020, the Yankees have dropped the first two of 19 against the second-place Red Sox this year, this one in front of 20,019, the largest crowd at Yankee Stadium since the pandemic.

Gleyber Torres hit a two-run homer for the Yankees for an early 2-0 lead, and he added a tying sacrifice fly in the sixth. He also made a heads-up defensive play in the second, cutting off a throw from the outfield and redirecting it to second for a rally-killing out.