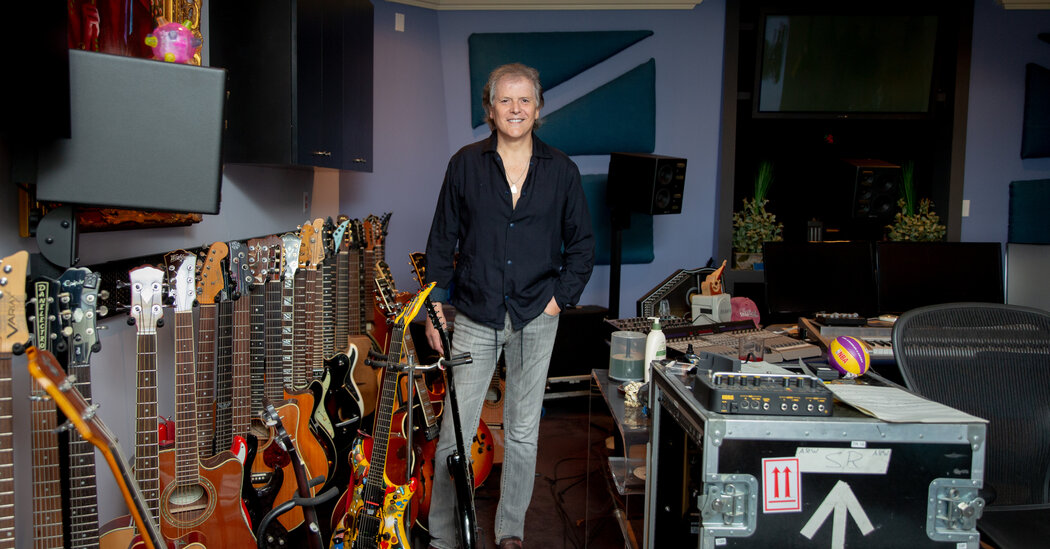 Even the most casual N.B.A. fans probably remember the classic theme song for games played on NBC during the golden era of 1990s basketball. They’ll almost assuredly recall that it was written by John Tesh, the former television host and composer. Some might even know that it’s called “Roundball Rock.” It has been memorialized in pop culture on “Saturday Night Live” and further enshrined with a video of Tesh explaining where the song came from: a voice mail message he left for himself

In the 21st century, another theme song has become familiar to N.B.A. fans, although most likely not as much as Tesh’s. It is the one that signals the start of one of the most influential studio shows in sports, “Inside the N.B.A.” on TNT. Here, the composer of the theme song is virtually unknown to the show’s viewers and even to its hosts. But he is a household name in some corners of music fandom and one of the industry’s most prolific composers.

“I wasn’t really even aware of that, to tell you the truth,” Ernie Johnson, one of the hosts of “Inside the N.B.A.” and a Yes fan, said in a phone call after finding out that Rabin was the composer. “But that’s very cool.”

Rabin, who lives in Los Angeles, described himself as a rabid basketball fan, particularly of the Lakers. He said that he “religiously” watches games and uses that time to practice the guitar. But when it comes to this theme song, he has gone mostly unnoticed.

“I remember Shaq saying once he liked the theme just in passing, but no one’s ever acknowledged me. Charles Barkley needs to acknowledge it and give a shout out. Otherwise I’m never going to support him again,” Rabin joked during a recent interview, referring to Shaquille O’Neal and Barkley, who host “Inside the N.B.A.” with Johnson and Kenny Smith.

Rabin, 67, turned to film scoring in the 1990s. He had shown an interest in orchestration dating to his childhood in South Africa, growing up as the son of a classical pianist mother and a violin-playing father. As a member of Yes, Rabin said that he would often try to introduce orchestral components to the music.

“A lot of it has become kind of electronic and computerized, but writing for orchestra was always a love of mine,” Rabin said, referring to on-screen scores. “So I just decided I’m going to get into film, and I remember my manager saying: ‘Oh, it’s a big brick wall there. Just because you’ve had a notoriety with other areas, film’s going to be very difficult.’ But I decided, ‘No, I really want to do this.’”

He quickly became a sought after composer in Hollywood. In 1998 alone, the films “Armageddon,” “Jack Frost” and “Enemy of the State” were released with Rabin’s scores. His most famous work is most likely the theme song for 2000’s “Remember the Titans.” That composition was played in November 2008 after Barack Obama delivered the acceptance speech for winning the presidency.

It was the “Titans” theme that put Rabin on the radar of Craig Barry, now the Turner Sports executive who oversees the “Inside the N.B.A.” studio production. Barry, also a serious Yes fan, was doing some production work for NBC during the 2002 Winter Olympics in Salt Lake City — and used the theme from the “Titans” soundtrack to close out the final broadcast. Barry then recruited Rabin to rework the TNT studio show’s theme song.

“I went armed with literally a handful of his work,” Barry said, and added, “I was essentially telling him I want all of this together.”

Part of what makes a theme song effective, Barry said, is that “you never get sick of hearing it.”

Clearly, TNT has not. Usually, according to Rabin, the network will update graphics and other parts of the broadcast — except the hosts, of course — every three years or so. But the theme song has stayed the same for almost two decades. It has become a character of the show, much in the same way as Johnson, O’Neal, Barkley and Smith. (Like Tesh’s, this theme has appeared on “Saturday Night Live,” but as part of a larger sendup of “Inside the N.B.A.”)

“To me, it’s kind of a signature,” Johnson said. “If somebody has their back turned, and they’re in the house doing something and have the television on for background noise and they’re waiting for something, when they hear that song, they go, ‘OK, the ‘N.B.A. on TNT’ is on. It’s like the stamp that says the N.B.A. is coming on.”

The listener can hear certain mainstays of what made Yes successful, particularly the soaring lead guitar riffs and the heavy use of a synthesizer. But there is more that may not immediately meet the ear. The song is in the time signature 7/8, whereas most songs written for any medium in the last two centuries are more traditionally 4/4. (A time signature is generally a measure of a song’s rhythm.)

The genesis of the theme song was an act of aggression. Rabin said that he was watching the 1984 N.B.A. finals between the rival Boston Celtics and his Lakers, when during Game 4, Kevin McHale, the Celtics power forward, clotheslined the Lakers’ Kurt Rambis. Rabin was scoring while watching the game and the clothesline inspired him to come up with the 7/8 meter, which he would then use for TNT.

Another aspect distinguishing this song is its versatility, whether under highlights or as a main theme.

“What’s unique about the ‘N.B.A. on TNT’ theme is that it can be used in various situations, and it can be really appropriate,” Barry said. “It has this primary theme and then it has this very aggressive rush section and then it has a light fanfare piece of it. It’s all kind of seamlessly melded together.”

Rabin said the only N.B.A. figure he has discussed the theme with is Gary Payton, the Hall of Fame point guard who spent much of his career with the Seattle SuperSonics. Right after the theme made its debut, Payton visited the set of “Bad Boys II,” a film Rabin had scored. Rabin was chatting with the film’s lead, Will Smith, when Payton approached.

“I said: ‘Oh, my goodness, you’re the Glove. How you doing? And can I shake the glove?’” Rabin said.

He informed Payton that he had composed the “Inside the N.B.A.” theme song.

Even though TNT has not made a move for a new theme song, the current one does have one prominent critic: Rabin.

“It’s kind of a terrible affliction I have,” he said, adding that he’s also uncomfortable watching movies he has scored. “I feel like anything I do, when I listened back to it, I always think: ‘Oh, God, why didn’t I do this? I should have done that.’”

But every time the song is played on the broadcast, Rabin collects a check, no matter how much he cringes at hearing it played.